So she spent the first half of Saturday's "Officiate Michigan Day" at DeVos Place in Grand Rapids receiving tips and learning what it takes to get to the top from two of the most respected referees in her field -- NBA Finals veterans Joe Crawford and Bill Kennedy.

Crawford and Kennedy were two of more than 40 officials representing the professional, college and high school levels who passed on their expertise to Martin and a total of 1,248 officials who attended Saturday's event, believed to be one of the largest gatherings of sports officials in U.S. history.

Officiate Michigan Day was a cooperative effort by the National Association of Sports Officials and Michigan High School Athletic Association in advance of the NASO annual summit, which kicks off Sunday in Grand Rapids.

"It's just a great day to be a Michigan official," said Martin, a 1997 Detroit Renaissance grad who currently officiates at the high school, junior college, NAIA and NCAA Division III levels. "Seeing your family, which is referees, … it was great seeing everyone here just knowing that everyone is trying to get something out of this day."

Officials from all corners of both peninsulas received the opportunity to learn and interact on a variety of topics and with a variety of officials regarded at the top of their respective fields in Michigan and in some cases nationally. 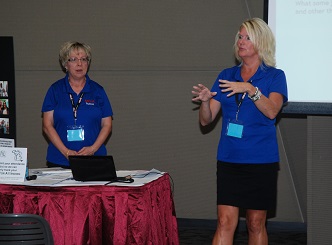 All three Paganellis have officiated Super Bowls, and O’Halloran is coming off working his fourth straight Stanley Cup Final. Crawford and Kennedy both officiated during the recent NBA Finals, and Powell also served as team leader of the U.S. women’s national volleyball team that won the silver medal at the 2008 Olympics.

"I hope you appreciate what you got here today," said Bill Topp, a presenter Saturday and vice president of publishing and management services for NASO and Referee magazine. "It's not just about the volume of people. It's the types of people you have here and the interaction that's going on and the fact that you've got sports talking to each other where they normally don't talk."

Martin learned but also taught. She sat on the "Officiating 101" panel that discussed issues for new officials, one of 13 lunchtime workshops on topics ranging from life in the NBA to female officials recruitment to outside views on high school officiating.

Marquette's Mark Petrie was one of a small group of officials who made the trip from the Upper Peninsula, and he spent his lunch hour listening to a round table discussion on "Making Good Associations Great." An MHSAA official since 1993, he's the trainer for volleyball for the Upper Peninsula Officials Association.

"It's an opportunity to get together with fellow officials, but more importantly an opportunity to learn and grow as an official," Petrie said. "The day any of us thinks we know everything is the day we should retire."

Commonality was a theme throughout the inaugural Michigan day, with presenters sharing mechanics and strategies that apply at every level of athletics. Equally emphasized was the responsibility of officials to take what they learned back to their local colleagues while working to recruit new officials to the ranks.

"This is pretty unique in that we have this many officials, both men and women, coming together in one place. We have a common theme to improve officiating and to make it consistent at the high school level," said DeWitt's Mike Brya, a high school official since 1995.

NASO reported on its website that only Georgia's officiating day in 2011, with 1,600 participants, has outdrawn Michigan for a similar event.