High school sports officials are quite familiar with the phrase, “They can’t play the game without you.”

Athletic Directors are even more familiar with it. They live it. They believe it. Covering the multitude of interscholastic contests is quite daunting for mainland Michigan ADs.

School officials on Mackinac Island and Beaver Island have an even bigger task.

That’s where Dave Reeb comes in. He’s been officiating volleyball and basketball for as long as folks can remember.

Without Reeb, 73 years young, and his partners, the island athletes simply wouldn’t be able to play the game.

“For many years Dave has organized getting refs over to the Island for our volleyball and basketball programs,” said Kerry Smith, Beaver Island AD. “He always makes sure we have someone here.

“Especially at a time when refs are hard to find, he always comes through for us.”

Reeb would have been at Mackinac Island this weekend with Glen McIntyre to officiate a boys basketball Northern Lights Conference game between the Lakers and Munising Baptist. COVID-19 challenges caused the visitors to cancel the Friday evening and Saturday morning contests.

McIntyre is currently registered for basketball, volleyball and softball with MHSAA. He began officiating in 1979. He got into volleyball a few years ago  He’s scheduled to go with Reeb to Mackinac Island again Feb. 11 and to Beaver Island Feb. 18.

In the meantime, Reeb will take advantage of the weekend off and travel to Perry with his wife, Linda, to watch one of his grandsons play middle school basketball. It should be easy traveling as compared with journeying to Mackinac and Beaver. 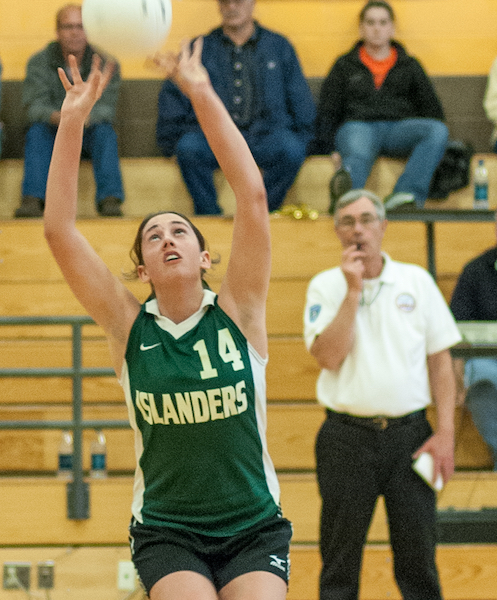 Boat, airline and sometimes snowmobiles are offered by the schools to get Reeb and his partners over from the mainland and to the school. Reeb lives in the Inland Lakes area, as do many of his partners.

During his early days of going to the islands, Reeb flew out of Petoskey with his former referee partner Randy Sagante in a private plane actually piloted by Sagante. The two of them were dubbed “The Flying Referees” by a local reporter.

Chartered flights have been the most common mode Reeb and other referees have used to get to both islands.

“With Mackinac, you never know,” said Reeb, a 30-year volleyball and 20-year basketball veteran. “When you go over there on the ice crusher … it’s been fun too.”

Reeb’s next island game is at Beaver Island on Jan. 14.  Steve Hines, formerly the longtime girls basketball coach at East Jordan, will be taking his first trip to officiate the Islanders with Reeb. They are scheduled to fly out of the Charlevoix Airport.

Hines has officiated volleyball with Reeb and has been to Mackinac Island once for volleyball. They’ve done basketball games together previously on the mainland.

“When I exited coaching, I decided to give officiating a shot,” Hines said. “I am looking forward to going with Dave.”

Hines is a shiny example of what school administrators love about Reeb. He always comes through with a partner so kids can play the game

Amy Peterson, who is now in her second year as superintendent, principal and athletic director for Mackinac Island, is glad she met Reeb shortly after starting on the Lake Huron island. She had been involved in athletics in her previous job at Houghton Lake but only as a parent of school athletes.

Reeb had been coming to Mackinac Island long before she arrived.

“I got to know Dave last year right when I got here,” Peterson said. “One thing about Dave is he is either here himself to help or he knows a whole lot of people who can.

“Being new to this area and the athletic part, he was really helpful.”

Another example of getting officials to the islands is Reeb’s grandson, Jacob. He went to Beaver Island in 2018 and 2019 to referee both volleyball and basketball with his grandfather. 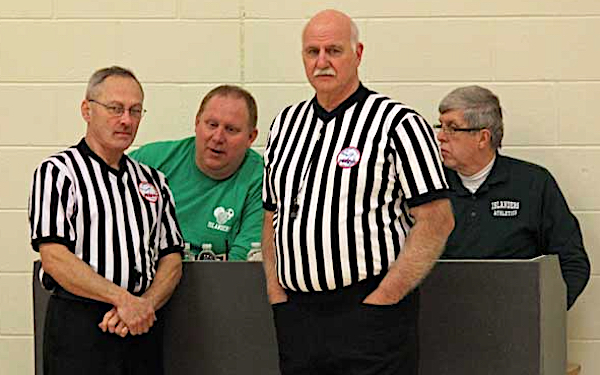 “After we’d get done, he’d stick around and shoot baskets with the teams,” Reeb said. “They got to know him.

“It was fun for him. It was a connection for him too.”

It isn’t just his just his abilities to get officials nor his officiating skills that stand out for Reeb on the Lake Michigan island though.

“Dave is not only a ref but a friend to our community,” Smith said. “He genuinely cares about the kids and community here.

“He is an amazing asset to our school and the other schools he serves all over Northern Michigan,” Smith continued. “Dave is one of a kind, and we truly appreciate his commitment and dedication to BICS.”

Smith noted Reeb has had a significant impact on student-athletes over the years.

“The kids and parents know him well,” she said. “He goes out of his way to help kids improve skills as well as help new coaches.

“He always has a smile and a kind of easy-going demeanor,” she continued. “Everyone knows Dave, and we will keep him coming back to the island for as long as he wants to ref.”

Reeb has enjoyed the relationships, too, just as he did during his career as an educator with the Inland Lake schools.

“It is great to see the students progress year to year,” he said. “Now I am seeing some of their kids coming through, just like I did at Inland Lakes.

“Some of the fans have been enjoyable … you see them again and again,” he added. “I have really, really enjoyed it, and it helps the schools.”

Retired Beaver Island volleyball coach Connie Boyle indicated Reed was much more than a referee. She was impressed with Reeb’s commitment and saw him as a mentor, coach and a friend to many of the visiting coaches, as well as visiting and island athletes.

“When you ref on the island, it is a huge time commitment because you need to be at Island Airways in Charlevoix for your flight by 4:30 and you will ref basketball and volleyball games that night, as well as first thing in the morning, which means you won't leave the island until 1 o’clock the next day,” she said. “You can always count on Dave to do an impeccable job during the game.” 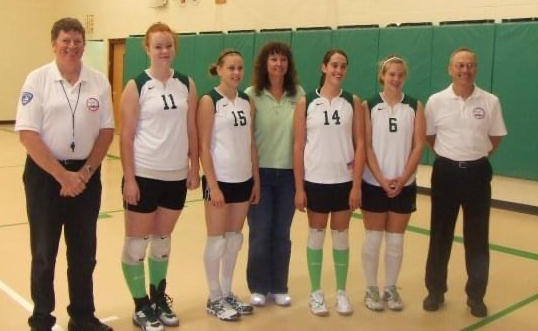 Boyle is one of many who noted the specialness and frequency of which Reeb and his wife Linda made quilts and presented them as gifts.

“Occasionally he gifts a senior one of his very special quilts, which are truly amazing and cherished by the girls,” Boyle said. “Because if Dave Reeb thinks you're a special player and person, you stand even a little taller.”

Boyle’ s daughter Caitlin, who died last year after battling a brain tumor, received a quilt from the Reebs. She was part of the Islanders Class of 2009.

Tom Frick, now retired, was a teacher at Mackinac Island and Inland Lake schools. He refereed volleyball and basketball for nine years. He was yet another example of Reeb finding referees to help.

“One day we were talking and he said, ‘Get your stuff, and we’ll do it’ - so I did,” Frick recalled. “We went over there four or five years.

“He was very committed to the those people on the islands,” Frick continued. “They really enjoyed him.”

Weather often interferes with getting on and off the islands. Reeb has never taken the two-hour ferry ride from Charlevoix to Beaver, counting on the plane ride. He has been on the much shorter ferry ride to Mackinac.

For the most part, the flights to the islands have been fine, the officials noted. Only once on each Island did Reeb get “stranded” while refereeing the Lakers and Islanders. He and his partner had to spend another night waiting for the weather to clear for a flight back to the mainland.