PETOSKEY – What once was one of the most raucous gyms in the northern Lower Peninsula had grown hushed as one of Michigan’s proudest student sections slowly fell away.

Hopefully Petoskey’s opponents didn’t get used to the silence.

The Blue Crew, a finalist for the inaugural Battle of the Fans in 2012, is back after all but disappearing the last few years – and hosted the latest BOTF tour stop Wednesday for its boys basketball game against Sault Ste. Marie.

The breakdown: The Blue Crew is rooted in generations of support going back to the school’s old Central Gymnasium, an arena straight out of “Hoosiers” where 1,500 fans for years packed to the rafters in support of their teams. A new school and a new gym became home to the Northmen in 2002, and that move served as the catalyst for creation of the “Blue Crew” by the school’s student council. The section thrived for more than a decade, but over the last few years for a few reasons discussed below, dwindled. But it’s been rebuilt – leaders have even pulled out of retirement advisor Karen Starkey, wife of longtime boys hoops coach Dennis and a former counselor at the school – and that well-known energy has returned to fuel the next generation of Petoskey athletes.

We met with seniors Ashlyn Kartes, Stuart Green and Emme Williams and juniors Danny Kolp, Isabella Rowe and Jake Lee during a night dedicated to raising cancer awareness. See below for our video and five reasons the Blue Crew is rising again.

When we visited with the Blue Crew in 2012 during the first Battle of the Fans finalists tour, we learned about a student section steeped in history. But over the last few years, the section more or less disappeared. As this year’s leaders tell it, the Crew was completely broken-down last winter, with a lack of leadership and a mood that discouraged participation because seniors did what they wanted and expected everyone else to fill in behind them. Football games this fall were similarly tepid. But everything changed after most of the section’s new leadership attended an MHSAA Sportsmanship Summit on Nov. 9 in Traverse City, where they loaded up on energy and ideas. On the car ride home, they created a new Blue Crew Twitter page and had a number of followers before they even arrived back at their school. The revival was on. Volleyball games started taking off, and hockey and basketball have been big draws this winter. Petoskey girls and boys basketball teams at all three levels had games across three gyms Wednesday – the main gym, auxiliary and the gym at the old school – but it was obvious students were trickling into the section after their games. Nearly 200 showed for a midweek game, even as the junior varsity girls were playing at the same time as the varsity boys. It's a lesson for hundreds of schools across our state: you too can grow a student section, and all it takes is a group of motivated leaders to get it started.

Whereas by the end of last year seniors ruled and few others cared to be a part, the attitude in the Blue Crew is much more inclusive this winter. Leaders during our trip emphasized multiple times how much they adore their underclassmen, who might make up a majority of the section – there are likely more freshmen than seniors most nights. It’s changed the mood in the school’s hallways as well. Meanwhile, those younger students are showing excitement about continuing to grow the section in the future, while this year’s seniors are excited they’ve been able to restart a legacy and leave something behind. Gone are rules about seniors in front – an informal group of guys who attend most games take some of those spots because they lead cheers, but whoever shows up first gets the best seats. “We kinda went back and forth on this because we have seniors in our Blue Crew and in our leadership, and of course you’ve waited the four years (to be up front). The people before us were really into the seniors in the front row, so we were raised with that. But once we sat back on it, the people that get there early are the ones who are going to cheer the loudest, and they want to be there. The underclassmen who get there an hour early before game time are the ones who are going to cheer the loudest, and that’s what we want.” 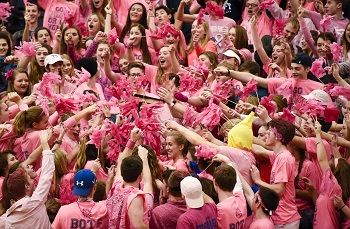 The Blue Crew is a student section in the most traditional sense. While there were a few bells and whistles during our trip – the rollercoaster, a traditional “Don’t Stop Believing” performance arm-in-arm – this is a section that is most focused (and rightly so) on the game being played. The chants started from the first basket (see moment in video with streamers thrown into the air) and didn’t stop until the game’s end. Cheers may have started up front, but the section as a whole was engaged – which made the Crew stick out for more than just the pink shirts they were wearing.

4. This section doesn’t just cheer for the boys.

Again, there were games at all three levels going on all over Petoskey on Wednesday. But 40 students filled the Crew at the start of the 5:30 p.m. girls varsity game, and that continued to grow steadily as the other games were completed and players and fans moved on to the main events of the night. This is all by design; as the leaders went about rebuilding the section, they came up with 20 theme nights so they had one for every home varsity game for both the boys and girls. They also made sure to spread what were expected to be the most popular to both boys and girls games to guarantee maximum support for both teams. What’s more, the varsity players cheer for each other. Kolp and Lee start on the boys team – Kolp, in fact, is considered one of the top players in the northern Lower Peninsula – and they are sure-thing regulars at the girls games, Lee often dressed as Gandalf from “Lord of the Rings” and the 6-foot-9 Kolp as the section’s tallest cheerleader rooting on his sister Megan and her teammates.

5. They’ve mixed the old and the new

As noted, the ode to the band Journey has survived the rise, fall and rise again of the Blue Crew, and the section lives in the same far corner of the gym and continues to receive the wise counsel of Starkey. But the new has been important too. Just about every student section has theme nights, but Petoskey’s leaders worked hard to do something just a little different to make each unique – Frat/Sorority Night included giant Greek letters for “PHS” and Wacky/Tacky Tuesday was a new spin on bad fashion. They’re also taking advantage of social media, using Twitter to connect with classmates across a school with nearly 1,000 students – for example, a freshman DM’d to suggest a toga night idea that made the final list, and a Twitter poll was used to pick from four possible slogans for Wednesday’s pink shirts. The school also brought back a cheerleading team this fall after 12 years without one, and the Blue Crew hopes to work with that team as support continues to build.

New and improved: “The atmosphere is totally different (from last year),” Green said. “People didn’t really want to cheer. Maybe they wanted to but they felt like it was out of their element – where now, there’s an atmosphere that you show up, you cheer as ridiculous as you want, and it’s accepted.”

We watched; we joined: “A lot of other student sections in our conference are good. We’ve been surrounded by that. So after going to the (Sportsmanship Summit), we knew we could do that,” Kartes said. Recalling watching last season’s BOTF champion Traverse City West at a 2016 District Final, Williams added: “Just seeing that, we all just realized playing in front of our Blue Crew is not easy. And that’s what our goal is.”

All are welcome: “(Wednesday) we went around to the lunchrooms and passed around candy, and we were like, ‘Hey, come to the game. Bring your friends,'" Williams said. “Once everyone is in the student section, even if you don’t know the person, it’s like you’ve known them for so long. It’s like one big family there, and I think that’s what makes us so special.”

Next stop on BOTF: We'll finish the 2017 BOTF tour at Frankenmuth for tonight's boys basketball game against Millington. Click for coverage of our visits to Boyne City on Jan. 13, Traverse City West on Jan. 20 and Charlotte on Jan. 28.