TRAVERSE CITY – We’ve worn a path on U.S. 127 and M-115 the last few years with nearly annual visits to Traverse City West to check out the Bleacher Creatures for Battle of the Fans.

The reigning BOTF champions have set that kind of standard as one of Michigan’s elite high school student cheering sections – and didn’t disappoint Friday as we dropped in for “Titans GameDay” and our second stop on this year’s finalists tour.

The breakdown: In addition to winning last year’s Battle of the Fans V, Traverse City West’s Bleacher Creatures have been finalists three of the contest’s six years. That being the case, we’re pretty well-versed in the section’s beginnings under founder Chase O’Black, who served as the school’s student senate governor in 2007-08. The Creatures are organized and managed by the senate, and during games led by a group of 4-6 section leaders who wear green and yellow-sprayed paint suits and make up the Bucket Brigade – named for the buckets they pound during football games and other outdoor events.

We visited for Friday’s boys basketball game against Alpena and met with seniors Liz Anton, Dani Priest and Sam Schriber and junior Connor Thompson. Below is our video report, followed by some of what makes the Creatures contenders again.

1. This year is more than a victory lap.

And that’s quickly obvious. West didn’t have school Friday and only a half-day Thursday, yet nearly 300 Creatures filled the student section despite a number of families getting out of town for the long weekend. But that's how West rolls. Leaders told us about how some of their classmates showed up at the gate for this fall’s football game against rival Traverse City Central at 8 a.m. so they could be sure to get near the front of that night’s section – missing class to secure a spot (which, of course, we do not condone). “After winning last year, there’s definitely a standard or an expectation we have to meet. The bar is way up there,” Schriber said. But last year’s BOTF championship also has this year’s leaders wanting the section to be a little different too. So while they’re drawing on some of the many cheers and chants that have become tradition over the last decade, they’re also working to keep things fresh. And more importantly, Priest pointed out, while last year’s BOTF effort was driven hard by the school’s senate, this year’s is really being carried by the student body as a whole. 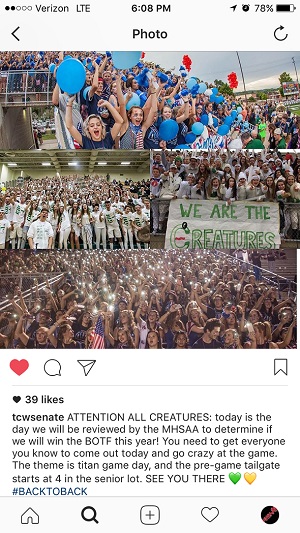 Traverse City West has two student-led government bodies. The student council is responsible for more of the traditional student government work, “behind-the-scenes” efforts like stocking the school’s food pantry and working on projects aimed at daily lives of their constituents. The student senate – of which Priest is this school year’s governor – is more the social chair planning activities that “make school more of an enjoyable place,” she said. The senate created the Bleacher Creatures and manages all student section activities, with the leader of the Bucket Brigade – this year Schriber – among the 29 senators. Each grade of nearly 400 elects six representatives, and five more are chosen at-large based in part on past service. The school has nearly 1,600 students, but Schriber said he thinks the senate connects with probably 80 percent in some way by hosting a variety of entertainment options. And Battle of the Fans is a daily part of the conversation.

After now 27 visits to Battle of the Fans finalists, we rarely run across a completely original idea. And of course West does a lot this year of its favorite stuff from last year and others before – they have plenty in their bag that are time-tested and get the crowd rolling. But we’ve got to give a big shout for some of the most imaginative game themes we’ve heard. During a boys soccer game in the fall, the Creatures dressed up as soccer moms, complete with snacks for halftime. That’s at least a little related to last year’s “dad” theme, where students dressed up like dads but drifted more toward looking like grandfathers instead. For another soccer game, the Creatures took a spin way off a “green screen” theme, making it a shrubbery game where they all brought branches from various bushes and trees and formed something of a wooded wave. “We always have our classic themes that are super easy for people to get involved in,” Priest said. “But sometimes for games where we expect a lower turnout, we’ll just do a weird one.”

4. They really love their school.

There’s no question. In the video above you’ll hear Priest talk about being emotionally tied to her work with the Bleacher Creatures, and that passion is similar to what we found with last year’s leaders as well. Take as another example the annual “Patriot Game” – that football game between West and Central that led students to line up at 8 a.m. to get the best seats for a game that regularly draws upward of 8,000 fans including most of both student bodies. In the video above you’ll see Creatures before the Friday's game reciting “The Creature Creed” below, written by Schriber and Thompson this winter and another example of what’s behind the section spirit.

As noted at the start of this report, the Bleacher Creatures have been around for a decade, and during all three of our visits we’ve heard current leaders recount how the foundation was laid – in fact, a spirit scholarship has been created for a graduating senior in O’Black’s name. Because of the senate, there is an organized and expected handing down of leadership from year to year, and the Bucket Brigade has a similar succession plan, with a junior or two chosen for the brigade each year, and those juniors then in charge of filling out the group the following fall when they are seniors. Senate leaders have a plan to visit the junior high and teach some of the cheers to this year’s eighth graders – and although that idea hasn’t panned out yet, a group of about 20 middle schoolers occupied the adjacent section Friday and even got a “Future Creatures” chant directed their way from their high school mentors.

All of one, one for all: “Being an athlete, I think almost every athlete’s dream is to win a state championship with their team,” Schriber said. “(Winning BOTF) isn’t just like the soccer team winning states; this is the entire school winning the state championship. That’s just so cool. … Everyone was a part of it.

Let’s do this again: “I think what sets this year apart is we won last year, and I think some people are like, ‘Oh, we already won. Do we even have to try now?’” Thompson said. “But then you see those kids who are at Thirlby (Field for the Patriot Game) at 8 or 9 in the morning and it just makes you realize we care about it just as much as they did in 2008. It’s still a really big thing here at West.”

Next stop on BOTF: We'll visit Charlotte for Saturday's game against DeWitt, followed by trips to Petoskey (Feb. 1) and Frankenmuth (Feb. 3). Click for coverage of our visit to Boyne City on Jan. 13.