Cooper Kirby has a lot of people he’ll be thanking today.

Then Kirby will call the governors from his first three years at West and thank them for inspiring the current Creatures to carry on the legacy he and the rest of the senior class will soon leave for those who will next take their turns running the show.

And he can’t think of a better way to go out than as part of a Battle of the Fans champion.

“Our school, the students who go to these games, are just so passionate. We invest so much time because we love it,” said Kirby, this school year’s senate governor and a leader of the Creatures.

“It’s just a long history of people who just like me loved our school. People who were so invested in the Bleacher Creatures. It’s says so much this year about what set us apart, but also about years past and every student who’s ever gone to one of our games and been passionate about what we do.”

The Bleacher Creatures will accept its MHSAA championship banner during the 6 p.m. Class B Boys Basketball Semifinal on March 25 at Michigan State University’s Breslin Center. The other four finalists also will be invited to Breslin to receive rewards for this season’s achievement.

Traverse City West was chosen based on a vote by the MHSAA’s 16-member Student Advisory Council influenced by public vote on the MHSAA’s Facebook, Twitter and Instagram sites. A total of 18,424 social media votes were received, with those results then equated against a school’s enrollment.

The Council based its vote on the following criteria: positive sportsmanship, student body participation, school spirit, originality of cheers, organization of the group, section leadership and overall fun.

Munising received the majority of public social media support, finishing among the top three in three of four ways votes were accepted (Facebook likes and shares, Twitter re-tweets and Instagram likes) – despite being the smallest school among our finalists. Votes were then scaled to take into account a school’s size – although Traverse City West received the most social media votes total, Munising’s when compared to its student enrollment pushed the Mustangs to the top of the list.

Other numbers to consider from this season's contest: The application videos have been watched nearly 23,000 times, and the MHSAA-produced videos from our tour stops have more than 5,500 views. The stories on the five finalists plus Tuesday’s explanation of how to vote had been viewed 9,353 times as of 8:30 this morning. The five Snapchat stories covering our visits were viewed nearly 10,000 times combined.

It’s a little tough to believe the Battle of the Fans contest is finishing its fifth year, but our second-most applications shows it’s as popular as ever – and we thank all of our student sections for their work. We continue to learn from each other, and here’s what we’ll remember most about each of our finalists:

What we saw: The Orioles already play in one of the neatest gyms around – one of few domes we know of in the entire state. Now they’ve got a passionate student section backing them up. Surveying school-wide for the name “Flight Club” was a great start, and the section has only continued to rise. In addition to plenty of creative material – including a jack-in-the-box featuring the Orioles’ mascot – the halftime drum line performance was one of the highlights of this year’s BOTF. The Flight Club also provided the best national anthem of the tour, with the student section carrying the song A cappella to lead the rest of the crowd both poignant and impressive. That this school’s support went from a group of maybe 20 students at games only a year ago to a few hundred regulars now is a testament that it can be done quickly even at a medium-sized school with more classmates to rally.

Why we’re fans: Did we mention the drum line? And the anthem? But really, what made Charlotte a contender had as much to do with leg work as it did with the finished product on display during games. Reminiscent of 2015 champion Dowagiac, the Flight Club idea was planted by a passionate teacher who in this case also was an alum. But it didn’t take long for spirit to grow throughout the student body – and the community as a whole. We believe the Flight Club is here to stay, and we’re glad for it.

Be the Example Award: Munising

What we saw: With only 200 students in the high school, it was surprising to see a full set of student stands filled, plus a pep band, plus a Homecoming court and cheerleaders making up an entire corner of a gym otherwise packed. It wasn’t a surprise to those who live in a town small in number but huge in support of its school and athletes. “Stang Nation” started bringing the noise during the junior varsity boys game and rarely let up over the next three hours – proving size of the school matters much less when creating atmosphere than the ability to get the energy up and keep it high. Stang Nation didn’t have much pre-planned material – 100+ students just cheered non-stop and supported their team from start to finish. And it was arguably the best decorated gym we’ve seen during five Battle of the Fans finalists tours, with awesome Homecoming-inspired banners backing up both baselines to go with the usual regalia covering the walls.

Why we’re fans: We left Munising with a lasting feeling that if every school had a student section like Stang Nation, we couldn’t be happier. Mixing in the band, cheerleaders, Superior Central’s student fans for a “U.P. Power chant” … all of it made it clear why home games are the place to be on winter nights. And we could only imagine how fun it must be for athletes to return to town for parades thrown now any time a team wins at least a District title – and how much fun it must be to be part of welcoming the latest champion home.

What we saw: It’s more what we heard. "Pound" describes the powerful sound the section made; pound-for-pound also describes how the “Green Machine” brought it at a level comparable to much bigger schools. From the boys basketball team’s entrance to the gym through a faux ice brick wall, through a cheer where everyone pounded the floor in unison with a series of standing arm-in-arm jumps (watch the video below to see what we mean), the Machine pumped the volume. From start to finish, Warriors fans provided plenty of support for the team on the floor with cheers, signs, a band, a tunnel including the entire student body, and much more.

Why we’re fans: The Green Machine is a new section too, debuting just this fall, but followed a process we’ll promote for years to come. “Mechanics” got their start at an MHSAA Sportsmanship Summit, set attainable goals like making Friday night games all-school parties, got the entire student body involved starting with a vote to name the section, and then watched their work pull an already tight-knit student body even closer. Leaders drawn from every class means this is only just the start.

What we saw: Yale’s student section, this year named Kohler’s Kids (the latest rendition in honor of the boys basketball coach), has become a power in this contest. Just like our first visit to the school in 2015, Yale loaded a full quarter of its gym with students, and the sound once again was palpable. Yale feels like it has a Class B title contender in its boys basketball team, and the “Kids” feel like a catalyst to that success and do their part by showing up to support en masse. Yale also strikes the right balance of being immersed in the game, with brief side shows only to fill in breaks in play.

Why we’re fans: The point of Battle of the Fans is to show student sections they can have a blast while cheering in a fun, positive way. That’s Yale. Kohler’s Kids don’t just pretend to care about sportsmanship, they live it – and with the attitude that going negative and engaging in verbal melees with opposing sections just isn’t necessary, much less fun. They just don’t care to be like that – the Kids realize there’s a better way. It’s an attitude we admire, and a message that continues to make Yale a great ambassador for student sections statewide.

What we saw: Total involvement from opening tip to final buzzer. From the “Creatures of the Week” on couches in the front row to those holding down the back of the section 20 rows up, everyone was moving and yelling and happy to be there. A band of leaders, the “Bucket Brigade,” kept the group together – something incredibly difficult at a school any size, much less one with a section of 400 students representing all four grades, different social groups, etc. But this is a way of life at Traverse City West, and it’s easy to see why. It’s been hard to not spontaneously throw out an “O-E-O-E-O, TC West” every once in a while. And the whole “We are the Creatures” chant with the drum line is pure pandemonium – in a good way. 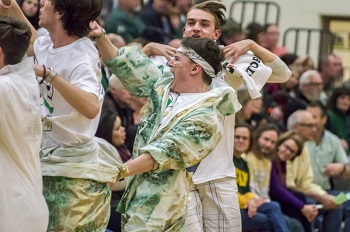 Why we’re fans: We learned about the Creatures during our first BOTF trip to the school in 2014 and admired then a leadership structure that makes student spirit part of school government. West’s student senate runs the show, and this year’s leaders are as passionate about their school as any we’ve come across in five years of visits. But something like what we saw from the Creatures doesn’t happen unless there’s buy-in from all over the student body, and that’s what a student section is all about. And we can’t say enough about how West cheers for its teams – during game play, the focus is entirely on the game; during halftime, we were treated to a surprise dance line/Harlem Shake by the older guys manning the front row, who had been coached by another senate member. The crowd went wild.

“This culture isn’t just student sections. It just makes classrooms better, makes friendships stronger, makes groups that aren’t initially related identify with just one identity, which is awesome to see,” Kirby said. “Kids are coming together to scream our heads off – but it’s enabled us to do so much with our community as well. It’s amazing what people can do when they come together and be passionate about something bigger than themselves.”

It’s fair to say we’ve never encountered leaders so in love with their school and enthusiastic about student life. At its most fundamental, that’s what student cheering sections are supposed to be about. We’re glad to celebrate Traverse City West showing the state how enthusiasm plays out with fun every time the Creatures get together – and in this case, paid off with a Battle of the Fans championship.

Battle of the Fans IV is sponsored in part by Milk Means More.

Check out below our stories and videos behind the finalists. Also, click to see student-produced videos from all sections that entered the contest. (Photos courtesy of Rick Sack.)

Read all about it: Charlotte 'Flight Club' Shows It Can Soar

Read all about it: 'Stang Nation' Continues Tradition Of Support

Read all about it: 'Green Machine' Gears Up For BOTF V

Read all about it: 'Creatures' Remain Way Of Life At TC West

Read all about it: 'Reloaded' Yale Section Brings Noise Again