BEAVERTON – What have Beaverton’s Bleacher Creatures meant to their 1,100-person town during their 35 years cheering on the local teams?

A leader of this year’s student cheering section, she made a trip to the elementary school to read to some of the younger students. When teachers would mention the Creatures, the kids’ faces glowed.

“As 6-year-olds, they knew what a Bleacher Creature was. They knew it meant you came to the game, you wore red, you painted your face,” Frasher said. “They were all excited.

Beaverton was the final stop on this year’s Battle of the Fans III tour. MHSAA staff and Student Advisory Council members visited all five finalists over the last month to document the stories behind the sections and film them on home game nights. The public may vote for its favorite on the MHSAA’s Facebook, Twitter and Instagram sites Tuesday-Thursday, with the Student Advisory Council taking that vote into consideration when selecting the champion after that vote has concluded.

The winner will be announced Friday on Second Half and honored with a championship banner during the Boys Basketball Semifinals on March 21 at Michigan State University’s Breslin Center.

Not long ago, Frasher was one of those elementary school kids, looking forward to her turn in the student section. Now she’s among a group of junior and sophomore leaders that includes three third-generation Beaverton High students and three more whose parents also went to the school.

The original Bleacher Creatures emerged in 1979 and then gained steam during the Beaverton boys basketball team’s run to the MHSAA Class C Semifinals in 1984. The Beavers lost that game, 69-58, to Kalamazoo Christian at the University of Michigan’s Crisler Arena.

But keeping a promise to his team, Beaverton coach Roy Johnston – the third-winningest boys hoops coach in MHSAA history and a devout Michigan State fan – kissed the block “M” on Crisler’s center court after being carried to the middle of the floor by the Bleacher Creatures. “Roy kissed the floor in ’84,” is still heard around town including by junior Jen Eaton, whose mother was a sophomore in the section in 1984.

Johnston’s presence still plays an enormous role in the Creatures’ efforts. He entered this season with a combined record of 650-287 coaching four schools going back to 1971, and part of growing up in Beaverton is aspiring to play for the legendary coach – or root on his team. After all, the gym is named after him, and three grandsons are now in the program.

“We know you can’t have an amazing thing like this happen without a supportive community,” said sophomore Braedon Wolfe, whose father and uncle both played on the 1984 team. “And that’s what we have here. This thing never would’ve lasted close to this long (without) these people in this community; it’s amazing.”

But the section also has continued to evolve. 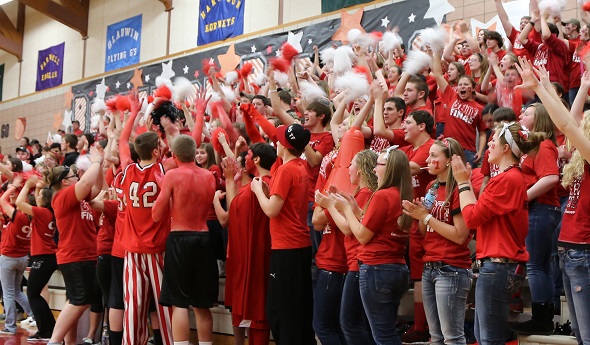 The original Creatures morphed into something known as the “Red Rave” at some point (a small sign where the current section sits pays homage) before Bleacher Creatures returned as the name in 2008.

Those early sections, by the oral history literally passed down through generations, traveled big and cheered strong, but didn’t have the creativity of the current Creatures, who for their team’s Valentine’s day game against Houghton Lake created Cupid to make friends of the Beaver and Bobcat mascots. Of course, there also was a piece of recent tradition – Wolfe, a robed and white-bearded Moses, parting a Red Sea of Beaverton students clad in their usual red T-shirts.

Last year’s section was led by a pair of emphatic seniors who graduated in the spring. This school year’s leaders realized a longer chain of command would be necessary to secure the section continuing into its fourth decade.

Full club meetings are standing-room only, with about 30 students – or just under 10 percent of the school – taking part. The band sits adjacent to the student section during games and plays a big part, and multiple members sit in on the spirit meetings to help coordinate between the two.

There’s even an annual Bleacher Creature Award given to a member of the section that resides in the school trophy case next to “Butch,” its most prized traveling trophy.

“I think (the section) hit a roar, and we realized, ‘Why end it when it’s going so well,’” Frasher said. “We need to keep it going.”

“And we needed to get organized to we could keep it going,” added junior Nate O’Brien, another of the spirit club leadership.


There’s been another evolution that has taken hold over the last decade and especially this fall after Beaverton failed to make last season’s Battle of the Fans finals.

Eaton remembered as a middle schooler not having any desire to be a Creature after hearing some of what was hurled forth by those high schoolers during games. Such things are almost unheard of now, but Frasher and her classmates knew almost immediately a year ago why they didn’t advance in BOTF – despite just missing the finals by finishing seventh in the vote to decide the top five.

A “winning team – losing team” chant, meant to point out and demean the team about to be defeated, had to be the culprit. That became a little more apparent when a viewer left a comment about the chant below the application video.

“Our feet shuffled the next day. No one really talked,” Frasher remembered. “We came to school and sat there, and we knew. We watched and re-watched the video, and it came down to a point: that’s the reason.”

“We were going to apply (this year) from the beginning,” Eaton said.

Although the Creatures were disappointed, the winter did end with some positives to carry into this fall, including unexpected solidarity that formed as Beaverton made a run back to the boys basketball Quarterfinals.

The Beavers’ Regional run took them to Jack Pine Conference foe Sanford Meridian’s gym, and about 30 Meridian fans joined into the Creatures section. So too did students from league colleagues Gladwin, Houghton Lake and Roscommon. The Creatures absorbed with joy those who wanted to join and brought handfuls of extra shirts so their new cheering mates had something to wear to fit in.

The expanded section became known as the “Jack Pine Super Crew,” and this winter Beaverton’s leaders have noticed new sections cropping up at almost every school in the league.

And don’t forget those original Creatures. During the Quarterfinal run, a few of the dads and uncles dressed up like cheerleaders. Friday night, a group of parents made sure to join the Macarena line that circled the court during a break. They have built props and donated for spirit buses to away games – anything to keep these Creatures going strong. The 1984 hoops team was inducted into the Beaverton Sports Hall of Fame on Friday, and both former players who spoke made sure to mention how much support the teams derived from the section then and now.

It’s been tough financially in the community of late, and next year seventh and eighth grade students will move to the high school in order to save the district a reported $100,000. Bad times on top of the usual small-town jokes are enough to give some rude opponents something about which to snicker.

The Bleacher Creatures are a way – now always positive – the community continues to stand together to answer.


“This is us coming together, even though you can say anything you want about it,” Porter said. “This is who we are.”

PHOTOS: (Top) Beaverton "Bleacher Creatures" prepare for a free-throw attempt during Friday's game against Houghton Lake. (Middle) The Creatures cheer on their classmates during the MHSAA's Battle of the Fans visit. (Photos courtesy of Bob Frei.)