The 2014 Battle of the Fans tour picks up again Friday following a two-week break after an opening visit to reigning champion Buchanan on Jan. 17.

In case you missed it, the bar is set high for those hoping to unseat The Herd as BOTF champion. But there is plenty of opportunity to meet the challenge – if contenders keep in mind some key reminders below from those that didn’t advance to this winter’s championship round.

We’ve learned during three years of Battles of the Fans that our student sections come up with ideas we’d never have imagined ourselves. But the best are rooted in some of the following core values, as shown from six schools that just missed this year's finalists cut:

(Click to watch our playlist of all entries submitted for BOTF III.)

There’s a reason St. Joseph nearly made this year’s BOTF finals – the Bear Den is no joke. Many in number. United in purpose. And as its contest entry describes, all in for Bear Pride.

Most BOTF candidates film their entry videos at home games, where they get the biggest crowds. But the Bears filmed at least part of theirs on the road – at rival Stevensville Lakeshore, where the turnout appeared equally strong.

Bear Pride is about a lot of things, leaders told us. Our favorite? “Bear Pride is always cheering, even if we’re losing.” We couldn’t agree more.

We had a great time visiting Petoskey's Blue Crew when it was a finalist during our inaugural BOTF in 2012, and the Crew continues to do things the right way – starting with respect.

Petoskey’s section has a blast singing along with one of the best pep bands we’ve seen and cheering on their classmates while keeping things always positive.

Bay City John Glenn filmed its application video during an America-themed game, which on its own is a sure unity-builder. 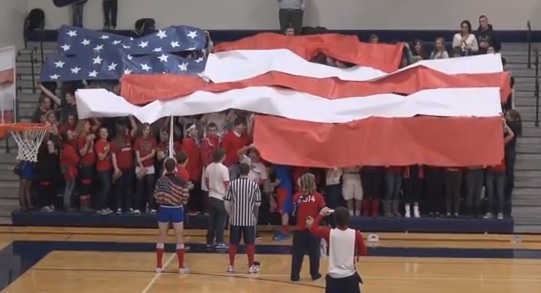 But its section leader also noted that the Bobcats players dress to the section’s themes on game nights, with boys coach Dale Clyde joining in as well.

And John Glenn gets an additional nod for a cool addition to the national anthem – the section created a giant paper American flag (see right) that it flew proudly.

Tune in to the game

A big part of BOTF is reminding students sections what their role should be. We want them to have a great time cheering on their classmates, while keeping in mind that the game being played is the main attraction.

That’s not an issue in Marlette, where fans’ focus is clearly on the home team.

Students gather on their section of sideline to create a tunnel as players enter the floor, wear T-shirts supporting their favorites, and boast “the loudest cheers you haven’t heard in years.” We’re not sure what that means, but we’re sure it’s a good thing.

Mancelona is a BOTF finalist in the making.

The Ironmen have the right ingredients – many of their 282 students attending games, a Twitter presence to keep students informed (@DuerksTurks) and leaders to keep everyone organized as they seek to “do our thing; get rowdy.”

What takes a BOTF candidate to the next level is originality, and at Mancelona that starts with our favorite new section name. Duerk’s Turks is a spin-off of the last name of boys basketball coach Rick Duerksen, who just happens to own a turkey farm. Simple, but out of the box. Well done, Turks.

Extra Credit: Get behind your community

We learned about Ann Arbor Gabriel Richard’s “Masquerade for Mott” when the Fighting Irish were among BOTF finalists in 2013. We continue to hear great things about student sections getting involved in their communities, and Gabriel’s Richard’s Masquerade is one of our favorite ideas. 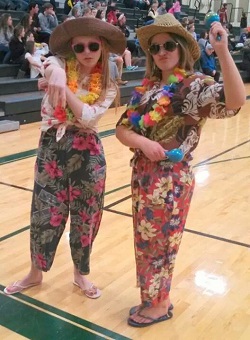 The Irish reserve a week of games to raise money for the C.S. Mott Children’s Hospital at the University of Michigan. Although last week’s frigid weather led to some postponements and rescheduling to finish this year’s Masquerade off later this season, the original schedule had the Irish dressing as super heroes for their Jan. 20 hockey game against Riverview Gabriel Richard at U-M’s Yost Arena, then jungle animals or in leopard/zebra prints for the “Welcome to the Jungle” Tuesday night girls basketball game.

Friday’s boys varsity basketball game against Detroit Catholic Central (to be made up Feb. 10) was to be an all-out Masquerade with a prize for the best costume – with DCC students also involved.

Those two schools raised $5,000 together during the 2013 Masquerade, on top of creating a spirit week of sorts to heat things up in the middle of an otherwise icy winter.

Next up on the BOTF tour is Bridgman, followed by a visit to Frankfort on Monday, Traverse City West on Feb. 7 and our finale Feb. 14 at Beaverton.


Remember, vote for your favorite of the finalists on the MHSAA Facebook, Twitter and Instagram pages from Feb. 18-20. This year’s winner will be announced Feb. 21 and recognized during the Boys Basketball Semifinals, March 21 at Michigan State University’s Breslin Center.