BUCHANAN –The “Herd” began three years ago as a cheering section, and senior leaders are among the few students left who remember school before “The Woods” took root in the southwest corner of Buchanan’s gymnasium.

Indeed, much has changed since the winter of 2012-13, when the section was started in response to the MHSAA’s Battle of the Fans competition. The Herd won BOTF that year, made the finals again in 2013-14, and has made Buchanan an ambassador to schools looking to similarly kick start a more spirited student body – even as the definition of student cheering section no longer completely describes what the Herd has become.

“The ‘change’ is still there. That’s what we like to call it, the change from year one,” said Buchanan senior Alex Martinez, who with Hurd and senior Sam Swem have been involved in leadership of the section since its start. “It’s pretty much day to day now. The Herd is still meant to be family. We’re still based from the student section; we started there. (But) we’re more than a student section now.”

And however they define it, again one of the MHSAA’s best.

Buchanan hosted the third stop Friday of this year’s BOTF finalists tour. The MHSAA also has visited Beaverton and Yale and will head to St. Johns and Dowagiac over the next two weeks leading up to the naming of this year’s champion Feb. 20.

The public may vote for its favorite on the MHSAA’s Facebook, Twitter and Instagram sites beginning Feb. 17, with the MHSAA Student Advisory Council taking results into consideration when selecting the champion after the vote has concluded.

Buchanan’s section leaders and “shepherds” – their teacher advisors – met this fall and seriously discussed not entering this season’s BOTF.

It’s not that they don’t want to hang another banner; being known as one of the best student cheering sections in Michigan has been a blast and resulted in opportunities to pass on what they’ve learned to students from all over this state and in some cases beyond.

The discussion on whether to apply centered on what could be gained by another BOTF title – the Herd started because of the contest but has become a way of life for many of the school’s 450-plus students, whether they’re competing to be known as the state’s best or just showing up to cheer on their friends at a Tuesday basketball game – or taking part in the other opportunities that now come the section’s way.

The school has a student council – Martinez is the president and Hurd the vice president – and other philanthropy groups as well. But the shepherds joke they would get rich if they could rent out the Herd to every group that asks – be it the local garden club for July 4,  organizers for the winter’s annual “Thrill on the Hill” festivities, or a number of others who regularly put in requests to have members at their events. 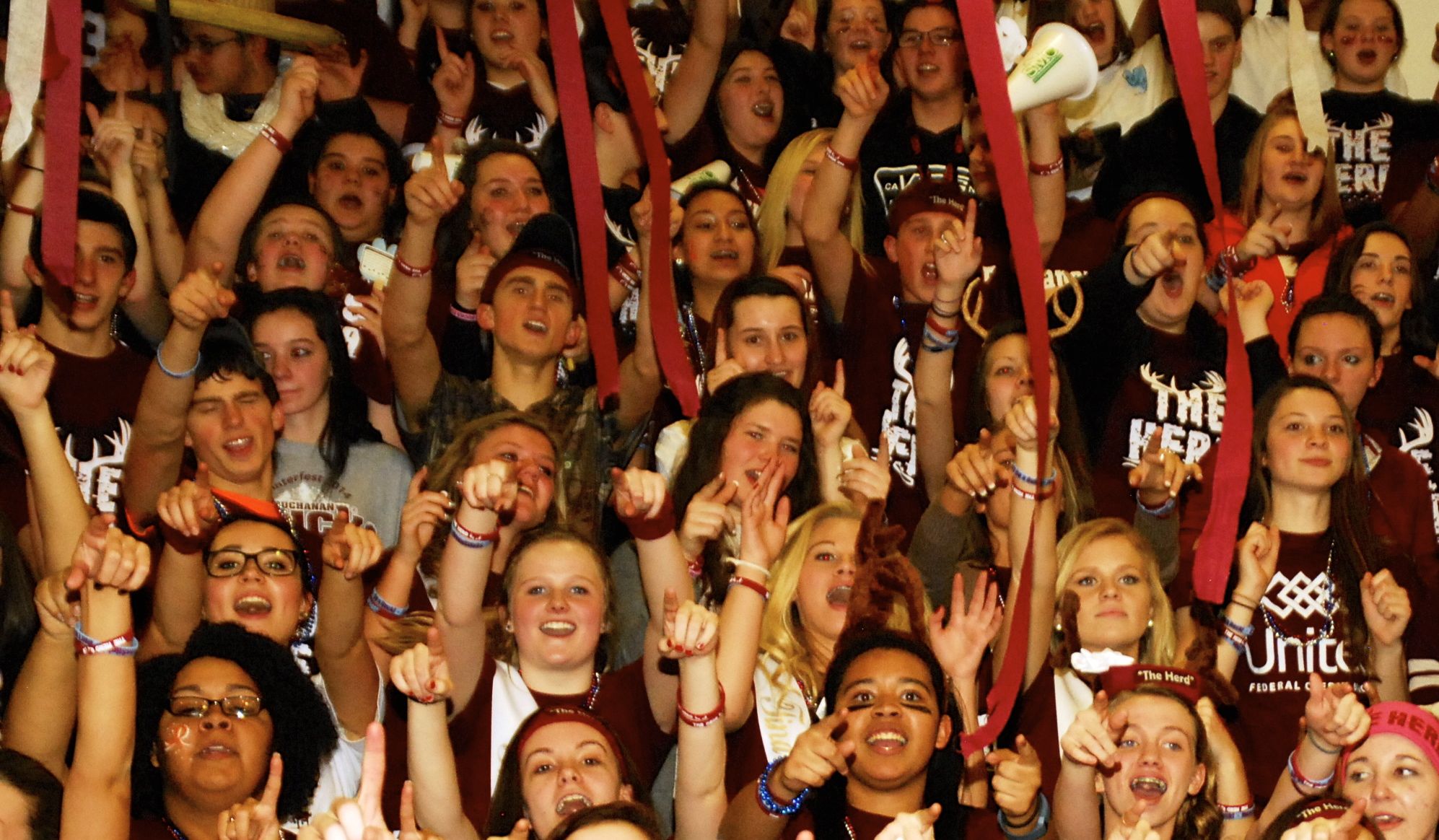 The most impressive part is how quickly the Herd mobilizes when called upon. Martinez took a call on Jan. 24 that eighth-grader Gannon Kutemeier had been diagnosed that day with leukemia. By mid-week the Herd and its growing middle-school component – the Junior Herd – had rallied to make wristbands supporting Gannon’s fight and helped in raising more than $8,000 toward his care. Herd members were prepared to welcome Gannon home from his first chemotherapy treatment Tuesday – but because the family decided that might be too much too soon, the section instead created banners for Friday’s game and took photos to send to him so he’ll know he has their full support.

“Instantly, that’s our goal now. We’re trying to recognize him,” Swem said. “This isn’t directly us, as in the Herd, but I see it as us because it’s a community, and the Herd is a community.”

Anecdotes supporting that statement continue to stack up. Like the parent’s friend who is considering moving his family to Buchanan from another local town because of that community feel. The presenter for an assembly who told teachers he could just tell something was different when he was at Buchanan – and the new student who said later he’d come to understand what that presenter meant.

Others want to know the secret; the Herd presented to student leaders from the Huron League – eight schools from the southeast corner of the state whose students may not have been able to find Buchanan on the map – to explain what they could do to create the same student section vibe.

“Even if we don’t win, we still grow as a community,” junior Alex Kilgore said. “This was my first year going to the (MHSAA sportsmanship) conference, and people knew us: ‘Oh it’s Buchanan; listen to them. They know what they’re talking about.’ That made us feel so great. It was phenomenal everyone knew about us and what we’ve done in Buchanan.”

That was a key part of the Herd deciding to return for BOTF IV. Not only are there now two classes at the school that weren’t part of the 2013 title, but it didn’t make sense for leaders to tout to other schools what BOTF has meant to theirs without continuing to participate.

Kilgore and juniors Lincoln Grwinski and Parker Saladin joined the main leadership corps this fall and are charged with keeping the Herd together after Martinez, Hurd and Swem graduate.

The section’s staples, like positivity and focusing on the game, are ingrained and will remain part of the script no matter who’s in charge. “Us three (seniors), we think the same way. But they think differently from us. And it’s not a bad way,” Martinez said. “We’re on the same track, and they’re on the same track – but they’re on a different track. They have the idea, like we had it, and after we’re gone they’ll take it a different way than we would. And that’s eventually what will be needed – change, newer and better things.”

The Herd’s initial motto of “Small town, big hearts” still rings true, even down to the elementary schools. Every time Hurd hears a kindergartner yell out “Herd that!” on the playground, she knows it will live on.

To her, the Herd is family; to Swem, the legacy is as a community changer. “I want this to go down in history,” Martinez added.

Been there, Herd that – Buchanan made history already by winning Battle of the Fans two years ago.

The Herd hopes for the title call again later this month – but if another school wins, Buchanan’s students still will turn out big-time for “Black Out to Neon” on Feb. 27, and for years to come.

“Don’t get me wrong. I had a great time here freshman year,” Swem said. “But sophomore year on, just the things we’ve done have been tremendous. You only go through high school once, and these are memories very few people can say they’ve gotten to acquire. It’s been a great time here, and I’ll definitely cherish my time here for a long time.”

PHOTOS: (Top) A Buchanan fans joins her classmates in cheering during Friday's game against Niles Brandywine. (Middle) Buchanan is a Battle of the Fans finalist for the third straight year. (Photos courtesy of Thomas Nyhuis.)