BEAVERTON – Nate O’Brien has had a hand in his share of traditions at Beaverton High School.

He’ll be the latest of two generations to graduate this spring, and in the fall he quarterbacked the football team to its best record since 2000. For the last two basketball seasons, he’s been honored as caretaker of the Beaver Slide – literally, a chest slide across the floor to Beaverton’s bench to end pre-game warmups – while suiting up for coach Roy Johnston, the second-winningest in MHSAA boys hoops history. On Friday, the Beavers continued a series with rival Gladwin played for Butch, a stuffed animal trophy awarded to the yearly winner in football and boys basketball since 1937.

But O’Brien already is looking forward to watching another legacy continue when his time as a student is done this spring.

In a few years, he’ll be sitting at basketball games with parents instead – and will watch and cheer the next generation of “Bleacher Creatures” as they continue a local point of pride he and his classmates raised to statewide renown.

“I want to sit on the other side of the bleachers and watch the student section, what we built, just start going crazy,” O’Brien said. “Help them with ‘Go Red! Go White!’ and see what they do.”

In the meantime, he and the rest of the current Creatures will continue to build a legacy that includes last season’s “Battle of the Fans” championship.

BOTF III champion Beaverton is again a finalist to be named the MHSAA’s top high school student section, and Friday hosted the first visit of this season’s MHSAA finalists tour.  The MHSAA next will visit Yale, this Friday, followed by Buchanan, St. Johns and Dowagiac leading up to the naming of this year’s champion Feb. 20. The public may vote for its favorite on the MHSAA’s Facebook, Twitter and Instagram sites beginning Feb. 17, with the MHSAA Student Advisory Council taking that vote into consideration when selecting the champion after that vote has concluded.

Not much has changed – in the best possible way – since last year’s Beaverton visit.

The original Bleacher Creatures emerged in 1979 and gained steam during the Beaverton boys basketball team’s run to the MHSAA Class C Semifinals in 1984. The section continued to thrive and now counts at least a handful of second-generation cheerers in its fourth decade.

While notable and popular, the Creatures weren’t always completely appropriate. That changed when the section became a spirit club in 2013-14; hierarchy was created complete with officers, video, photo and music coordinators and creative and fundraising leaders. They led some philosophical changes – notably refocusing the section’s fervor toward positivity and fun – and won a close race for the BOTF III title.

Then came serving as grand marshals of the town’s July 4 parade and a suggestion from one of the state’s Division II men’s basketball coaches that section leaders give his school a look for college – with the idea that they could start something similar at his university. Johnston, who has coached since 1971, told senior Jen Eaton her efforts had made school more fun again. All the while, the Creatures saw as an always-supportive community supplied even more – and they began planning for a run at the first repeat championship in BOTF’s brief history.

Make no mistake – last year’s push for change was motivated by the opportunity to win Battle of the Fans. This year’s effort is driven by the same – but has become much more for a group of section leaders who also played the major roles in 2013-14: seniors Drew Porter, Janessa Killian, Breanna Frasher, Eaton and O’Brien and junior Braeden Wolfe.

“I’ve learned through (BOTF) how important positivity is. I can remember coming (to games) when I was younger and hearing some of the things our student section would say, and you’d be like, ‘Wow, that’s not good for a sixth grader to hear,’” Frasher said. “Even as freshman I’d hear people say stuff and think that’s not OK. Now when we’re looking up chants on YouTube, trying to find new things, we’re like, ‘No, we can’t do that. That’s not in the realm of good sportsmanship.’ We’ve definitely learned how to be good sports.” 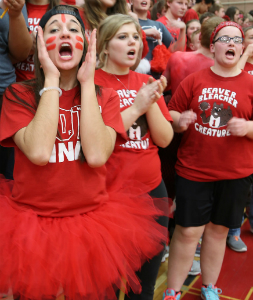 They’ve had to adjust to a few changes this school year; most notably seventh and eighth graders moving into the high school this fall, along with a new principal and athletic director. But those changes also provided opportunities for the section.

“It felt like we had to go above and beyond what we did last year,” Porter said. “When we won last year, it set a bar. Other schools are gunning to beat us because we won last year, so we have to do whatever is in our power to one-up ourselves.”

Porter spoke with the seventh and eighth graders, a meeting that drew about 25 students a year ago. This time? Standing room only with closer to 75.

Leaders decided the best way to get better was to get more creative and asked classmates over Facebook for ideas – and got valuable response. Relying on what they’ve learned about logistics and sportsmanship, the Creatures ended up with a repertoire that included their traditional cheers and chants during game action and a variety of “skits” for the breaks and halftime – including their tradition of Moses parting the “Red Sea” and also a first-time appearance by Barbie and a powerful dunk over 6-foot-8 athletic director Ryan Roberts under a mini hoop. “We want the crowd to laugh their guts out or think, ‘That’s a really good idea,’” Wolfe said.

Successors have been identified; sophomore Austin Rhodes is the club’s current vice president and with Wolfe will continue as leaders after these seniors are gone, and Eaton will hand the technical work to a freshman who approached her about the club on the first day of school.

They’ll take over with a wealth of knowledge learned during the Battle of the Fans run – notably, how to rally the school’s 420 students to support their teams, but also how to do so in the correct and championship-caliber way.