DOWAGIAC – Nate Hiler was sitting silently in a mostly-silent social studies class when he erupted. Senior Trenton Lesniak burst out of another classroom and started yelling down both ends of the hall. Soon teachers were cheering as well as frenzy lifted Dowagiac High School.

It didn’t matter who was where when word came Jan. 12 that the “Attack” had been selected for this winter’s MHSAA Battle of the Fans. In minutes, celebration had taken over the afternoon.

And Friday, eyes began to tear up again when remembering that day – and how Dowagiac’s student cheering section has transformed over the course of its leaders’ high school careers.

From the creation of the “Chieftain Heart” spirit club four years ago to the addition of “Front Row Crew” section leaders before last winter, Dowagiac students with their faculty advisors built to an outcome they never could’ve predicted – and an aspiration they have far surpassed.

“Over the last 3-4 years, all of this has happened just from one thing. It’s become so awesome. I couldn’t have ever imagined that,” Dowagiac senior Sydney Brooks said. “That it would’ve gone that far, become so positive, or so influential. It’s a legacy…. I’m just really proud of Dowagiac.”

The public may vote for its favorite on the MHSAA’s Facebook, Twitter and Instagram sites beginning Tuesday, with the MHSAA Student Advisory Council taking results into consideration when selecting the champion after the vote concludes Thursday. This year’s BOTF winner will be announced Friday on Second Half.

Nearly 400 students wearing #Dowagiac United T-shirts filled a corner of Dowagiac’s bleachers for Friday’s girls and boys basketball games against rival Edwardsburg. “Operation Orange” wrapped around their quarter of the gym, around a corner and through the band that holds down one baseline, and into the parents and other adults sitting across the floor from the students.

The collective volume left ears ringing. “The Jack” has to be a daunting place to play.

Friday’s turnout didn’t seem realistic to seniors and juniors who stand at the front of Dowagiac’s student section, who started this fall with much smaller goals – and from a much different place.

When the seniors were freshman, they heard plenty of upperclassmen who were down on their school. To hear those seniors tell it, students complained of nothing to do and couldn’t wait to leave town as soon as they could.

Brooks, then only a freshman, took a major role in starting Chieftain Heart, with its goal to bring some spirit to the halls by decorating before games and giving attention to lesser-known teams.

About 15 students showed up for the first meeting, but the idea took off. There’s no formal membership – students can come and go and help as they please. But evidence of their work was all over the school in advance of Friday’s Homecoming and the BOTF visit.

Chieftain Heart laid the groundwork for propping up school morale – but rebuilding what barely passed as a student section would take more.

Students showed for games. But not necessarily to cheer.

Apathy is one thing. But add in inappropriate gestures to opposing fans, signaling out players on the other team with mean nicknames, Twitter wars with opponents every game … it paints an unfortunate picture.

The Front Row Crew was a solution cooked up last year by English teacher and advisor Dustin Cornelius based on ideas from student leaders. The 12 students – six girls and six boys – stand in the front row wearing special credentials and are charged with leading the section.

But Dowagiac wasn’t immediately united. The negative culture didn’t change – and juniors Brooks and Alyssa Casey didn’t feel like they had input despite being part of the Crew. The leadership didn’t convince younger students to get involved.

“Looking back on it, it’s sad it had to be that way,” Casey said. “Looking at that and seeing where we are now, the improvement, we never thought we could’ve done that in less than a year.”

The Front Row Crew was remade. Those who wished to be part of the group this fall filled out an application and included a teacher recommendation. Older students received more points in the selection process, but all grades were eligible to apply. The student body voted for their favorites, and teachers had a say as well.

A group of leaders also attended the MHSAA’s fall Sportsmanship Summit in Grand Rapids, where they were immersed in BOTF highlights past and stories of student sections that had turned their schools into somewhere students wanted to be. 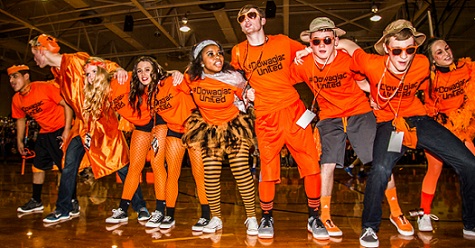 Dowagiac’s leaders knew they had the potential to do the same – but seeing how others had led the change gave them more confidence. They started coming up with new cheers on the drive home – but still had to convince their classmates to follow.

“Nobody had faith in us,” junior Di’maan McGill said. “Everybody was like, ‘This is Dowagiac. People don’t even know where Dowagiac is, let alone how to pronounce it.’” (By the way, it’s three syllables – Doe-wah-jack.)

The next step was a pep rally before the first boys basketball game this winter. The Crew explained sportsmanship, how they planned to show it, and played the BOTF video of last year’s champion, Beaverton, to give their classmates an idea of what they’d like to emulate.

This winter there have been bigger crowds at some Tuesday games than on Fridays last season. The Crew sold 500 shirts for Friday’s Orange Out – to a student body of a few more than 600.

They’ve continued with effective ideas. Students went into an Orange Out on Twitter last week to create more buzz for Friday’s visit. Upperclassmen have been paired with underclassmen to mentor them on being part of the section. And they have a plan for when opposing fans try to provoke a negative response – the Attack chants until it has drowned out the other side.

The district’s four elementary schools decided to have their own Battle of the Fans, and posted videos online to show their spirit. The city put together a video congratulating the Attack on its selection as a finalist.

“There just needs to be kids that want it bad enough. We all want it,” Casey said. “Once you get a group, it can be just 3-4 kids and a teacher, just put something together. Once you do something, people will follow you. They don’t want to be the kids not cheering. They want to be a part of it.”

And other schools do too. This season, social media is instead a source of positive feedback – including from opponents.

“We appreciate that there were no chants directed at us like “sit down (school name)” or “scoreboard” when you guys were up.”

“I still don’t like you DHS. But. Good game and I appreciated the sportsmanship presented.”

“They all say they respect us now,” Dowagiac senior Mary Magin said. “And that’s something we’ve never had before.”

School is more fun. Fans feel connected to their teams. The hallways are a friendlier place. Even members of the Front Row Crew who weren’t friends a year ago stand together to lead a united effort.

None of this was lost on senior Kenny Sanchez as he led the pep rally at the high school Friday afternoon. The magnitude of the moment weighed heavy on his emotions as well as he thanked his classmates for believing in the idea they’ve made a reality.

“In the beginning, they kind’ve think you’re crazy. If you’re trying to change something or be different, they just think you’re weird and don’t want to go with you – at first,” Brooks said. “Once you get more people to do it, they see it’s not crazy; it’s a really good thing.”