BUCHANAN – Watch what’s become nearly a decade’s worth of Buchanan High School “Battle of the Fans” videos online. Check out the four MHSAA BOTF banners – including two for championships – hanging side by side on the far wall of the school’s gym.

It might appear that having an awesome student section at this southwestern border school is as easy as opening the doors for a new year every fall.

But maintaining what’s become Michigan’s benchmark for high school cheering sections can take just as much work as starting from scratch – especially when those new leaders every year face the expectations of continuing a tradition that’s included those two BOTF titles won in 2013 and then a year ago.

“I feel like when we won (last year), that day, we all looked around as a (then-junior) class and were like, ‘Whew, we’ve got some work to do,’” Buchanan senior Aria Nowlin recalled. “I feel like the day it was announced that we won, it almost kinda humbled us looking toward (this) year, because we were all proud of the accomplishments that we did do in 2018. But 2019 has been a year of growth and seeing what works change-wise.”

“The Herd” indeed has seen changes this school year, especially in leadership after waving good-bye to an impactful group of seniors last spring. But what remains the same is passed down from class to class and makes the section a model statewide – and provided many of the reasons for the MHSAA to make an unequaled fifth BOTF trip Friday for the Bucks’ boys basketball game against Niles Brandywine.

We finished our Battle of the Fans VIII finalists tour by meeting first with seniors Nowlin, Garret Lollar, Tali Suloff, Emily Riley and juniors Carter Aalfs and Jade Smith – and then postgame with senior Maya Schuhknecht (who missed the earlier meeting to help run the point for the girls basketball team).

As we did with our first two BOTF visits this month, we will report on Friday’s following the format of a typical game night. We begin with a few tips from The Herd on how to maintain a championship-caliber student section, followed by a quick dive into Buchanan’s “pregame prep” and then a review of what we saw to close out this year’s BOTF tour.

Take some of these tips from The Herd:

Value your values: They will guide your student section through growth and tough decisions. The Herd is rooted in being positive, supporting the school’s athletes and having fun. It sounds simple – but establishing similar guiding principles can be key.

Set the tone – everywhere: A positive student section emerges from a positive school environment – and then helps keep that environment harmonious. Spread the good vibes not just during games but in the hallways all day long.

Tap administration: With five visits over seven years, we’ve gotten to know Buchanan’s teacher “shepherds” as well, and they provide an incredible amount of support to the section, as have administrators past and present. The key is they empower student leaders to take action. Those student leaders thrive on that opportunity to be creative and in turn empower their classmates.

Embrace mass communication: The Herd’s message rings out on every social media channel, but leaders follow up that mass messaging with face-to-face encouragement in the halls.

The Herd’s current leaders were in middle school when the section got its start about six years ago. They would be excused for thinking this is how things have always been at Buchanan games.

The shepherds know better. They remember pre-Herd when games were sparsely attended and that spirit of togetherness didn’t exist.

A lot of work goes into keeping it going. Section leaders over the years have put a lot of time into visiting the elementary and middle school students and teaching them cheers. This year, Lollar noticed how the youngest kids showed tons of enthusiasm – but the middle schoolers didn’t really respond. Leaders face the same attitude with some underclassmen, needing to convince them that it’s fun to loosen up.

As noted above, The Herd also was challenged by a self-imposed obligation to improve on a banner year. Of course that’s tough to do. So Herd leaders dug into history – mixing some of the great cheers and chants from their past with new ideas this school year.

“I think it’s different, but different is good. Because if we’re not changing, we’re not growing,” Lollar said. “So I feel we do do the same things, but we slowly introduce new things and we slowly bring back old things, because if it works then why take it out?”

So first, what’s old? A lot of cheers and chants made popular in the section in past years including dances to Pitbull’s “Timber” and Sheppard’s “Geronimo.” Smith said because most of the high schoolers have taken part in the Herd since before they were teenagers, they’re able to remember the oldies-but-goodies and pick them back up quickly.

What’s new is an increased amount of participation from underclassmen who have brought a supply of new ideas. Nowlin remembers going to her first Herd meeting as an eighth grader and being the only member of her class in attendance. Now her sophomore sister and her sister’s friends are among those supplying input and planning for their turn to take the reins. 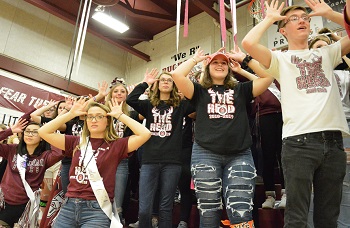 The Herd also has maintained its place as something of a civic group in the community, providing its enthusiasm to help Buchanan neighbors. Over the past year, the section has raised money to assist the family of a leader whose mom is fighting cancer, and also asked for donations for a recent graduate involved in a crash last summer. The Herd also will hold a co-fundraiser with students from Berrien Springs at an upcoming game.

“We do things to help the people that are in our community, because we are just that close-knit that we love everyone that goes through Buchanan,” Riley said. “So when they have a problem, we’re there to help them.”

Riley recently was named winner of the Miss Buchanan pageant. When the five finalists were asked as part of the last round what event in the community captures what Buchanan is all about, four – including Riley – answered with something regarding a night with The Herd.

Here’s how she defines a Herd Night: “It’s hype, we’re together, we’re united. We’re seriously a group of people who love Buchanan and want to support everyone.”

Friday was surely one of those nights that will live in the memories of the 130 or so students who filled their usual corner of the home gym.

The weather has played some havoc with the basketball teams’ home schedules, among other school events. So Friday’s game doubled as Winterfest, with royalty crowned between the girls and boys varsity games.

Then began what felt like a throwback to Herd Nights of years past.

First the lights went out. When it was time for the home team to be introduced, a spotlight and plenty of phone flashes came on, creating an environment sure to get any team revved up.

The boys basketball team proceeded to give opponent Niles Brandywine a somewhat unexpected challenge for the first three quarters (Brandywine is 16-1 and Buchanan 6-9), and the student section cheered the team on with chants we’ve heard for years plus a medley of songs and dances that seemed like a Herd greatest hits collection.

There was some new too. During the first half, the section split in half for a “Party” chant we hadn’t heard before and that’s become a Herd favorite, and at halftime a group of senior dancers performed their recent school championship routine. As the second half wore on, the section kept things mostly rowdy despite the game slipping away. 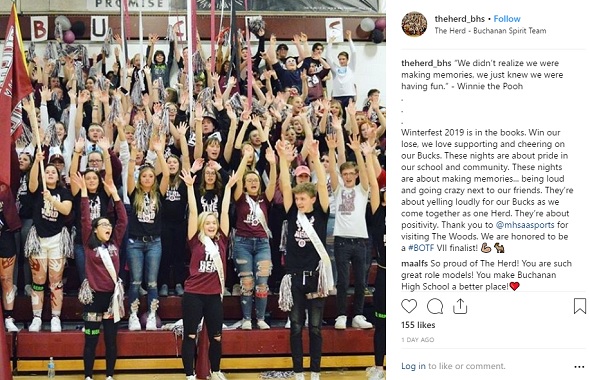 We do this together: “Having everything look good together and having everyone participate is something really awesome that not many people ever can do,” Lollar said.

It’s no secret: “Not only (do we) live it, but our athletes that we support love it,” Riley said. “They look forward to it. It’s not just for us. It’s for the athletes because it supports them and it helps them. And the parents, they go crazy. All of Buchanan knows The Herd is where it’s at.”

Next for BOTF: Public voting for Battle of the Fans begins Tuesday on the MHSAA’s Facebook, Twitter and Instagram sites – come back to Second Half on Tuesday for instructions on how to support your favorite section.

PHOTOS: (Top) Buchanan’s ‘Herd’ enjoys a quick dance party during a break in Friday’s boys basketball game against Niles Brandywine. (Middle) Bucks students fill their section of the bleachers and feed the atmosphere with songs, chants and cheers from opening tip through the final buzzer.