PETOSKEY – When Dominick Murray’s older sister was a high school senior in 2012, Petoskey’s Blue Crew was a top-five finalist in the inaugural Battle of the Fans.

Three years later, then-freshman Dominick was “really iffy” about the whole thing and didn’t go to a game.

The once-proud Blue Crew had all but faded away. But in 2016-17, the section was reborn and returned to the BOTF Finals. And that wasn’t a one-hit wonder – Petoskey welcomed the MHSAA for Friday’s boys basketball game against Traverse City West as one of three finalists vying for this year’s Battle of the Fans VII championship.

Petoskey’s student section isn’t just back. It’s all the way back and better than ever before.

“There’s a lot of things stressful in high school, extremely stressful,” Petoskey senior Isabella Rowe said. “So coming to a basketball game or a football game or whatever kind of sport, just getting to focus on encouraging your classmates, getting to see people smile when Danny (Kolp) or anyone just dunks that basketball and everyone just jumps up in the air – it’s the coolest experience and the whole gym is so happy.”

We met with Rowe, Murray, seniors Jake Lee, Carly Williams, Jack Paulsen and David Paquette, and junior Taylor Whitman to discuss all that is the Petoskey Blue Crew.

BOTF is a competition, of course, and this year’s tour stop reports will follow a format similar to a typical game night – starting with a gameplan other schools can incorporate if they wish to join the fun, followed by our video from the tour stop and then more on why the section is considered one of the state’s best.

Take some of these tips from the Blue Crew:

• It’s not a one-person show. Start as early as you can and get as many passionate people as possible to join in the planning.

• Find out what students want. Petoskey’s love theme nights – and you’ve got to give fans who aren’t necessarily into sports incentives to keep them coming back for more.

• Work with your school administrators, finding out what you’re allowed to do and how they can help.

• Get social. There’s no better way to get out the good word than through social media. It’s the best way to let your classmates know what events are coming up.

• Get younger students involved, be it underclassmen or even middle school and elementary fans. They’re the ones who will be carrying on the traditions moving forward, and instilling pride and a sense of belonging early is valuable.

The last regular-season game of last season, at Boyne City, remains memorable because of how the section traveled and dressed up and made it festive. Not long after, Rowe and Lee – juniors who were part of the main organizing group – began reaching out for new help on social media and together coming up with people they thought might be good additions to the Blue Crew’s leadership.

What they found in part were a lot of classmates who were interested in coming to games and helping lead cheers on the floor – but not necessarily planning behind the scenes. Both are important, of course, and by the end of May the “core group” for this year’s Blue Crew had just about taken shape.

That core group put together a list of theme nights, ranked which should be on the biggest games, and in August started filling in a calendar (Rowe and Williams have put a new one together for every month). The leaders also put together a “rules and guidelines sheet” including things like how seating will work (you get the best seats by showing up earliest, not based on grade, etc.). They started thinking up ideas to get underclassmen more involved in the section and eventually began working with their National Honor Society and DECA chapters and SAFE in Northern Michigan to help with finances and provide giveaways like lanyards.

In fact, the Blue Crew already is working on next year – at least a little bit – putting together the materials Whitman will need to take over when most of these leaders graduate, plus suggesting classmates who could take their places.

Petoskey turned its gym into a safari-themed “jungle” for our visit, and packed its home stands despite the girls basketball team playing at Alpena and the hockey team hosting Alpena for a cancer benefit game in honor of freshman Evelyn Schwarz, who is undergoing chemotherapy while battling the disease.

The Blue Crew made sure to take part in that special event, raising money with a “miracle minute” between the first and second quarters. The Crew also had plans to finish the night by joining other classmates cheering at the hockey game after the basketball team was done.

“When you’re not part of a major sport – there’s not many fans at a ski race; nobody’s going to come out to the hill – (like with) soccer, before last year there was literally nobody there, and this year for the first time people are actually singing in the stands like you’d see in a professional game or something,” said Paquette, who played soccer and ski races. “It’s so cool, and it really gives you energy and support. It’s cool that your peers are supporting you for what you do, and I want to do (the same) because I love the positive energy we can give the basketball program, and I think it helps them better on the court too.”

A major change to the Blue Crew this school year has been the variety of teams it’s cheering. Football always is big, and basketball is the main draw up north during the winter. But the Crew made its share of volleyball matches during the fall and soccer games for the first time. Hockey has joined the winter rotation.

The BOTF Semifinal “Challenge Round” over 12 days last month also provided an opportunity for the Crew to grow its reach and continue its focus this year on getting more younger students involved. One challenge option gave BOTF semifinalists the opportunity to show how they get the youth involved – and Petoskey took that challenge head on.

The Blue Crew’s big focus for in-game fun this season was on creating great theme nights, but leaders learned something new there too.

Their classmates would get up for the challenge of a creative idea – dressing up for Safari Night gave them options of being a tourist, an animal, or just showing up in green or camouflage. But Crew members also like when themes are simple – wearing the school colors or all white, for example.

In the end, a mix definitely is best.

“(My sister) asked me about it. Obviously we do a lot of things differently than they did,” Murray said. “She wanted to know if some of the traditions still stand. … I told her what we did, and she said she’s much rather be in our student section because she’s an outgoing person and would’ve loved to dress in an ‘80s aerobics outfit.”

Posters have been put up around the school publicizing this Friday’s Snowcoming boys basketball game vs. Cadillac!! Theme is Blue & White ???????? #MHSAA #BOTF #SEMIFINALIST #Northmen
King & Queen will be crowned at half time ?? pic.twitter.com/rtCCMDPR5G

The roar is restored. “It hasn’t really crossed people’s minds that much that even just when we were sophomores, (Blue Crew) wasn’t a thing,” Paquette said. “The underclassmen have grown up with this as their only experience. It’s a testament to the culture change we’ve created here, at least for the juniors and seniors to accept that’s what the culture is now. And I think that’s good because it’s probably going to continue it in the future. 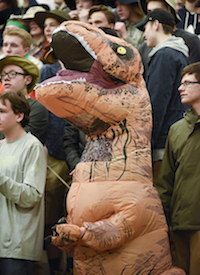 We’re all in this together. “I think the reason the Blue Crew died was no one was including the younger classes; now we’re including everyone,” Lee said. “It’s not like we’re split upperclassmen and (under)classmen. We’re all together now, in school and on the court.”

We keep with the theme: “Last year and even before that we filled half of our stands, and now every game is always filled all the way to the top,” Rowe said. “People are pretty good about doing (theme) because we definitely did a ton of different things – just from simple things like color blocks (like blue and white) all the way to an 80s aerobic theme. Carly and I focus on getting calendars set for each month, and of course we try to not do the same thing twice. The girls (basketball) team had its own and boys had its own. We always had relatively good turnouts, and kids were always excited; ‘Hey, you going to the game tonight? What are you wearing?’ That’s always the first question they ask: What are you wearing?”

Spirit is contagious. “I know T.C. West motivated us to be in (Battle of the Fans). And then Boyne City … we were (finalists last year) at the same point. And now Pellston, and I’ve heard kids from Charlevoix want to get involved in the Battle of the Fans competition,” Williams said. “They’ve seen our rules and guidelines sheet and they’re like, this is what we need to do. … It’s just motivation from other schools that’s getting kids started.”

Next stop on BOTF: We also visited Boyne City for its game Friday, and that report and video will publish Feb. 12. We'll finish the 2018 BOTF tour at Buchanan for its Feb. 16 boys basketball game against Berrien Springs.