“Shoes and hats. Match,” Shearer used say to his usually mis-matched friend, before providing a fashion upgrade by making Money wear a pair of his Nike Air Jordans.

The MHSAA finished its “Battle of the Fans” tour Friday at Buchanan for its boys basketball game against Bridgman. On his way back to school that afternoon, Money stopped at Shearer’s home and grabbed those Jordans to wear for an occasion that surely would’ve meant the world to his friend. Money knew right where to find the shoes – Shearer’s bedroom is just as it was June 17, the day the Buchanan junior died in a car crash.

Shearer and Money would’ve stood together this winter at the lead of the “The Herd,” which over the last few months has transformed from a loosely-organized group of student cheerers to an example of student section fervor at its most efficient – while rallying their small southwestern community near the Indiana border.

Sadly, the most super of superfans in “The Woods” was not a part of this school year’s incredible effort. But that hardly means Shearer’s influence hasn’t been present since the section’s new start this fall.

“I feel like he’s the backbone of everything,” said Money, who leads the Herd during games with one of Shearer’s cousins and Shearer’s best friend.

“It would have been me and him. During the first meeting (to plan the section), I was thinking, ‘Man, he would love to be here, being crazy.’”

Buchanan was the final stop on the Battle of the Fans tour, which also included visits to Frankenmuth, Vandercook Lake, Ann Arbor Gabriel Richard and Zeeland East. A fan vote will be held on the MHSAA Facebook page beginning Tuesday and ending Thursday, with those results then being combined with a vote by the MHSAA’s Student Advisory Council to determine the champion – which will be announced Friday on Second Half.

Shearer’s death rocked this town of nearly 4,500. He was known to say, “Make a statement everywhere you go,” and “Do it big. Never downsize,” and was recognizable as a regular at Buchanan sporting events.

Money knows his friend would’ve loved how the Herd of nearly 300 strong arrived at 4 p.m. for the freshman game this night. How home basketball nights have become so big in town that the 1,000-fan capacity was filled. How a community member mentioned he’d been coming to game for 30 years, “and I’ve never seen anything remotely like this.”

Coming off the momentum of last year’s inaugural BOTF contest, and prior to the MHSAA Sportsmanship Summit this fall in nearby Kalamazoo, Buchanan athletic director Fred Smith showed Money the video of last year’s champion, Frankenmuth. The Battle was a major focus of this fall’s MHSAA summits, and Smith said he hoped Money and other leaders could create something similar to last year’s champion. 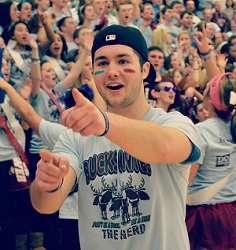 When Money found out Frankenmuth has 507 students – only 40 more than Buchanan – he realized the Bucks could achieve that goal.

But how he and his classmates and advisors made it happen so systematically is something schools would be wise to model.

Smith and Money built out the rest of the leadership team and attended the summit, during which they came up with so many ideas for the new Herd that Smith had a hard time keeping up while writing them down. “I got the chills as we were coming up with the ideas,” sophomore Sam Swem said.

The next step was forming the school’s spirit club. The first meeting drew 15 students; the second drew 30. With Money, Swem and sophomore Ellie Hurd in the lead, the group meets after school Tuesdays and Thursdays for planning, with theme nights spread quickly over Twitter marked with hash tags #FearTheDeer and #TheWoods.

Slogans took off quickly -- “Welcome to the Woods,” “Don’t be a bully, be a Buck,” and during football season, “Stay classy, but a little Bucknasty.” And like for a sports team, the school's booster club has provided the group with funds and supplies.

The leaders then took a “prep rally” on the road to the district’s middle and two elementary schools. They brought along Bucky, the high school’s mascot, to great cheers from the kindergarten, first and second-grade students.

Money, also known as the "Trophy Buck," has become something of a mini-celebrity among the mini students, who rush up to say hi and give him a high five, or say things like “Welcome to the woods” and “Herd dat.”

“‘Herd Dat’ is part of my regular vocabulary,” Money said, referring to the term that plays on the Herd nickname while signifying understanding and agreement.

“It’s a small town, and I’ve been here my whole entire life, so I know everybody here,” Money added. “If I go to the bank or the gas station, people say, ‘How’s the Herd doing? What’s the next theme?’”

“We’re a family, and not just a family within the school,” Swem said. “Even if you’re not at the games, you’re still part of the Herd.”

There’s no doubt, Shearer is also still part of the Herd. The school’s “fan from above” certainly is never far from the Herd’s collective heart.

Lose or win, like the Bucks did Friday, the students pay tribute to their classmate after every final buzzer. They join arms – and the parents have begun to do so as well – and sing Eric Church’s song “Springsteen,” one of Shearer’s favorites.

“I feel like we do it big here, and we never downsize,” Money said, echoing his friend’s favorite sayings, “and we make a statement everywhere we go.”

Swem’s reply simply said it all:

Subway is sponsor of this season's Battle of the Fans II contest.

PHOTOS: (Top) Members of the Herd are joined by players and coaches for the postgame singing of "Springsteen."  (Middle) Senior Josh Money leads the Herd through its array of cheers and dances. (Photos courtesy of Caryn DeFreez, DeFreez Photography.)