But a 90-minute delay during that eventual overtime loss to Imlay City showed junior Karli Klocke how a collection of her classmates watching a basketball game could impact their entire school.

The game was forced into an unexpected break after humidity in the gym made the floor too slippery. The teams went to their locker rooms during clean-up, and many of the 1,000 fans in the sold-out stands took their seats.

And despite the wait, all of more than 100 Krazies stayed through the final buzzer.

“I just like how it brought everybody, all grades, together,” Klocke said. “And during that hour and a half, we were all sitting there together. We’ve never been a group that’s usually been all together.”

Ten months later, the Krazies have ridden the momentum of that March evening – and grown into a top-five contender for this season’s Battle of the Fans IV championship.

Yale hosted the latest MHSAA finalists visit Friday for its boys basketball game against Almont. Reigning champion Beaverton was the first tour stop, Jan. 16, with Buchanan scheduled for this Friday and then St. Johns and Dowagiac over the next three weeks leading up to the naming of this year’s champion Feb. 20. The public may vote for its favorite on the MHSAA’s Facebook, Twitter and Instagram sites beginning Feb. 17, with the MHSAA Student Advisory Council taking results into consideration when selecting the champion after the vote has concluded.

The Krazies were first-time BOTF applicants this winter, following the transformation of a section that existed on a much smaller and informal scale over the last half-decade.

The former Kohler’s Kids, then Kohler’s Krew and Krew 2.0 before becoming the Krazies for 2013-14 – all in recognition of boys hoops coach Garnett Kohler – previously was a group of 20-40 upperclassmen who gathered to cheer on the team.

With last season’s District turnout helping fuel the effort, new section leaders this fall began organizing a section that would be more inclusive – encouraging the entire student body to take part – and have enjoyed immediate results. The Krazies swelled to an estimated 450 and filled a quarter of Yale’s gym to the rafters for Friday's girls and boys hoops doubleheader. 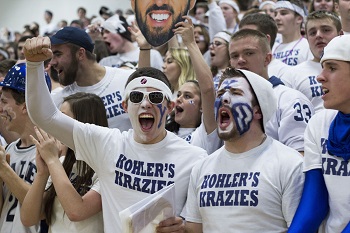 There hasn’t been anything complicated about Yale’s campaign; it’s as simple as trying to get more students to watch games together. And the Krazies have a rather straightforward goal for each game night; they don't stop cheering, aside from halftime, from the opening tip until the final buzzer – even when Yale's lead tops 20 points.

“This is such a new thing, everybody’s so excited about it and they just want to be a part of it,” junior Kaylee Schiffelbine said.

The Krazies took steps toward formalizing last season, when a group of four seniors sold T-shirts and created some of the favorite cheers. But their vision for the section was “small,” senior Spencer French said, and he and a few others began talking over the summer about how to expand it.

For starters, the section would no longer be about juniors and seniors only. Over two weeks this fall, the Krazies sold 210 section T-shirts – three times more than the year before. They started Facebook and Twitter feeds to get the word out, and parents joined in the social media loop; the Krazies’ BOTF application video enjoyed more than 1,000 views in just a few days after it was posted and now has been watched more than 5,000 times.

“Even with the video, (we thought) it would be cool to get top five (of BOTF),” senior Robert Vinckier said, “but getting the video shared around, it gets more people in the game, and they see how fun it is.

“We’re such good friends with the players on the team, so we’d go to the game whether we had a student section or not. But we might as well have more fun while we’re watching them play.”

The section’s rallying cry for 2013-14 could’ve been summed up as “wear your shirt and show up.”

“Wear your shirt and show up” should now include the word “early.” Although the girls varsity game Friday didn’t begin until 6 p.m., the first Krazies showed at 4:30 to secure seats closest to midcourt and the floor.

And the Krazies are a basketball cheering section in the literal sense. They cheered, nearly non-stop, through the end of a mostly one-sided 68-46 win by their boys team. Of course, they mixed some creative frills – bowling using the Bulldog mascot to knock down a group of fans, and the first superintendent-led roller coaster in BOTF tour history – but those merely kept the mood amped during breaks in play.

The objective is simple as well – be loud. Loud enough that an opposing player tweets that the section is “crazy.” Loud enough to encourage a rumor the Krazies won’t be allowed to cheer at a rival’s gym later this season. Loud enough to force an opponent’s point guard to motion to his bench because he can’t hear his coach yelling in the plays. Loud enough that Yale’s coach and players also had to come up with hand signals so they could communicate over the blare.

“Loud” would’ve been an understatement Friday. The Krazies’ roar, heard standing on the opposite side of Yale’s gym, registered noticeable decibels above the norm for a high school game.

French admits he didn’t know what they were taking on when he and a group of about 10 began meeting twice a week in late October armed only with ideas and what senior Steven Jordan calls “unwritten rules of sportsmanship.” But they forged strong relationships with principal Paul Flynn and athletic director Maureen Klocke (no relation to Karli), who have provided plenty of input while trusting the leaders to police the group when it’s rarely necessary. Leaders run ideas past administrators first, and that has allowed for what leaders feel is a bit more leniency.

Their classmates, meanwhile, have followed the lead and made good on last year’s potential.

“In high school, there are groups. Some groups aren’t going to be there (at games),” French said. “But it’s those kids who are coming out and saying, ‘Hey, what can we do? Can we do this? Are we wearing this? Can we do a costume night?’ That’s been the coolest thing for me. There’s people that I would never think would go to a basketball game, and they come up to me and say, ‘Hey, what can I do to help?’”

Spencer admits he was a bit anxious before the first boys basketball game this winter – until 115 students showed. The school’s athletic booster club has since donated $100 for gift cards to give out as prizes, and the student council supplied a sling shot Friday to send free shirts into the crowd.

“When we started off this year, a lot of people didn’t think it would be that big of a deal; it would just be another student section,” he said. “But as we’ve progressed throughout the season, people realized this is a big deal.

“We weren’t that tight-knit beforehand. Slowly but surely as the season has progressed, the parents, student organizations and administration all have been brought closer together. And we’re not even halfway through the season yet.”