EAST LANSING - Things were not going according to plan for Allen Park early in Thursday morning’s Division 1 Semifinal at Secchia Stadium.

Mattawan, fresh off an upset of top-ranked South Lyon on Tuesday, came out in giant-killer mode again, jumping out to a quick 2-0 lead against the No. 2-ranked Jaguars.

“Those nerves, they got us early, but we came back to play,” said third-year Allen Park coach Michael Kish, whose team will try to take the final step Saturday after last year’s D1 runner-up finish.

“I knew that I was due,” said Mia Hool of her hit to right field, which scored Madilyn Ramey and Ashten Omodio. “It feels great to know that I had my team’s back. When we get behind, we know we have to stay up and keep the energy. Our bats will come around.”

Both of Thursday’s Division 1 Semifinals featured cross-state matchups, with the east side prevailing in both contests.

Allen Park, 37-4-1, will go for its first softball Finals championship at 10 a.m. Saturday against No. 3 Macomb Dakota, which hung on for a 2-1 victory over Hudsonville. The Final should be a classic between the strong hitting of Allen Park and the dominant pitching of Dakota junior Megan Nuechterlein, who struck out 15 in her team’s Semifinal win.

It took the Jaguars a couple of innings Thursday to adjust to Mattawan junior Madison Vrba, and it was a run-scoring single by freshman Kiley Carr in the bottom of the third inning which broke the ice and changed the momentum of the game.

Allen Park tied it in the fourth, as Avery Garden smacked a leadoff triple and was driven in on a single by junior pitcher Morgan Sizemore.

Sizemore, who improved to 21-4 with the victory, allowed seven hits during the first three innings, then pitched no-hit ball over the final four innings.

“I usually do better pitching once my team scores,” explained Sizemore, who pitched last year’s Final when Allen Park lost to South Lyon, 5-0. “I start thinking different on the mound when my team is hitting behind me. Once we started scoring, the energy changed.”

Sizemore and Carr both finished 2-for-3 at the plate to lead the Jaguars, who finished with seven hits.

Mattawan, which also finished with seven hits, came out aggressively and with no sign of nerves – although none of its players had advanced out of Districts before this spring.

Alyssa Bloomfield and Eliana Ruhrup both singled in the first inning, before freshman Audrey Ford brought them both home with a single to right field. Ford and Ruhrup both went 2-for-3 for Mattawan (24-16), which put it all together in the postseason for a memorable run to the Final Four.

“It was a great start, and we also had a lot of runners on base in the second and third innings, but we couldn’t get that key hit to keep it rolling,” said 22nd-year Mattawan coach Alicia Smith, whose team finished second in the Southwestern Michigan Athletic Conference. “It’s a big environment and a big game, and I think the girls got just a little bit tight.”

Megan Nuechterlein was dominant on the mound – and at the plate – as Macomb Dakota won its 21st consecutive game.

The Cougars scored runs in the third and fourth innings to take a 2-0 lead and were cruising, until the young Hudsonville team made a charge in the seventh inning.

After a single by Jessica Dobias, sophomore leadoff hitter Megan Beemer lined a triple into the gap in right-center to score Dobias and put the tying run 60 feet away. 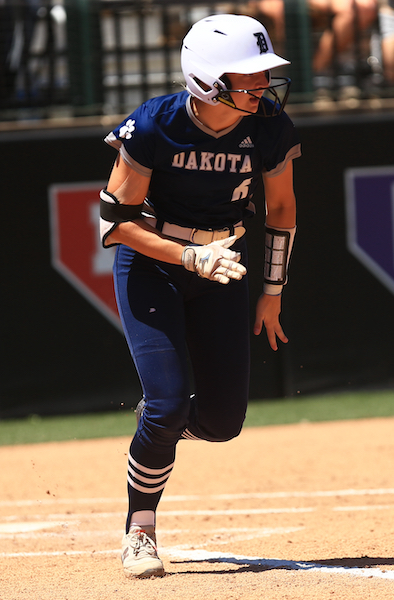 That set up a showdown between Nuechterlein, a junior who has a 0.84 ERA and has committed to Kent State University, and Hudsonville junior shortstop Ella Reifschneider, the Eagles’ leading hitter with a .536 batting average and 41 RBI.

Reifschneider got around a pitch but pulled it directly to Dakota first baseman Madison Franzoni, who grabbed the ball and touched her glove to the base to end the game.

“There were definitely some nerves there, but knowing that I have great defense behind me really helps,” said Nuechterlein, who improved to 17-2 on the season and added 15 strikeouts. “I try to spin the ball more and change up speed more as it gets later in the game.”

Jenna Higgins, a freshman outfielder, went 2-for-2 to lead Dakota at the plate. Alexis Olterdorf singled in Higgins in the third inning to open the scoring, and Nuechterlein had a long solo home run over the left-centerfield fence in the fourth inning.

Those two runs turned out to be all the Cougars needed, thanks to the overpowering pitching of Nuechterlein.

“I’ve been saying that she’s probably the best pitcher in the state of Michigan right now,” said third-year Dakota coach Dan Vitale, whose team won the Macomb Conference Red. “We know we are going to have our hands full (Saturday). We have to hit the ball better.”

“There is no quit at all in this team,” said 41st-year Hudsonville coach Tom Vruggink, who has won 1,124 games during his career. “That was a very good pitcher we faced, but we kept battling and hung in there and we were that close to tying it up.”