EAST LANSING – A 2009 Regional Semifinal loss to eventual state champion Hudsonville is the moment Caledonia softball coach Tom Kaechele points to as putting his program on the map.

Sammie Gehrls was in the stands that day, watching her sister Alexa pitch in the 2-1, 14-inning thriller. On Saturday, Sammie helped the Fighting Scots cement their place among the state’s elite, delivering an MHSAA Division 1 championship with a 6-4 win over Hartland at Michigan State University’s Secchia Stadium.

“That definitely set the tone for me,” said Gehrls, now a senior pitcher for the Scots. “I was a little kid, so being able to see her and that experience, I didn’t quite understand everything that was going on, but then she went and played throughout college and I was able to follow in her footsteps and look up to her all these years. She’s definitely one of my biggest supporters, and someone that I look up to very much, and has guided me in a lot of different situations and has taught me a lot.

“To be able to see where the program was at the bottom, and to be able to see what Coach Kaechele has built – these two coaches (assistants Tami Marlow and Jeff VanZytveld) have put in a lot of work and a lot of years. A lot of these girls have played for the same travel team. To see it all connect and be able to reach the ultimate goal is just so surreal.”

The title is the first for Caledonia, which had reached the Final in 2015, losing 5-0 to Warren Regina.

Gehrls picked up the win, striking out three while allowing six hits, four walks and four earned runs. Three of the runs, two of the hits and two of the walks came in the first inning, as Hartland built an early 3-1 lead on the strength of a bases-clearing double by Sam Nagel.

Following that inning, the Eagles found it harder to get things going against Gehrls, who closed the game with two perfect innings, including a pair of strikeouts to finish it out.

“If there’s one weakness Sammie has, it’s that she gets too amped up inside,” Kaechele said. “She’ll come out, and she overthrows. She didn’t have the best grip on the ball, and it was going high on her. The other day we got away with it because (the umpire) had a high strike zone. This guy didn’t have that, so she had to make adjustments within the game. 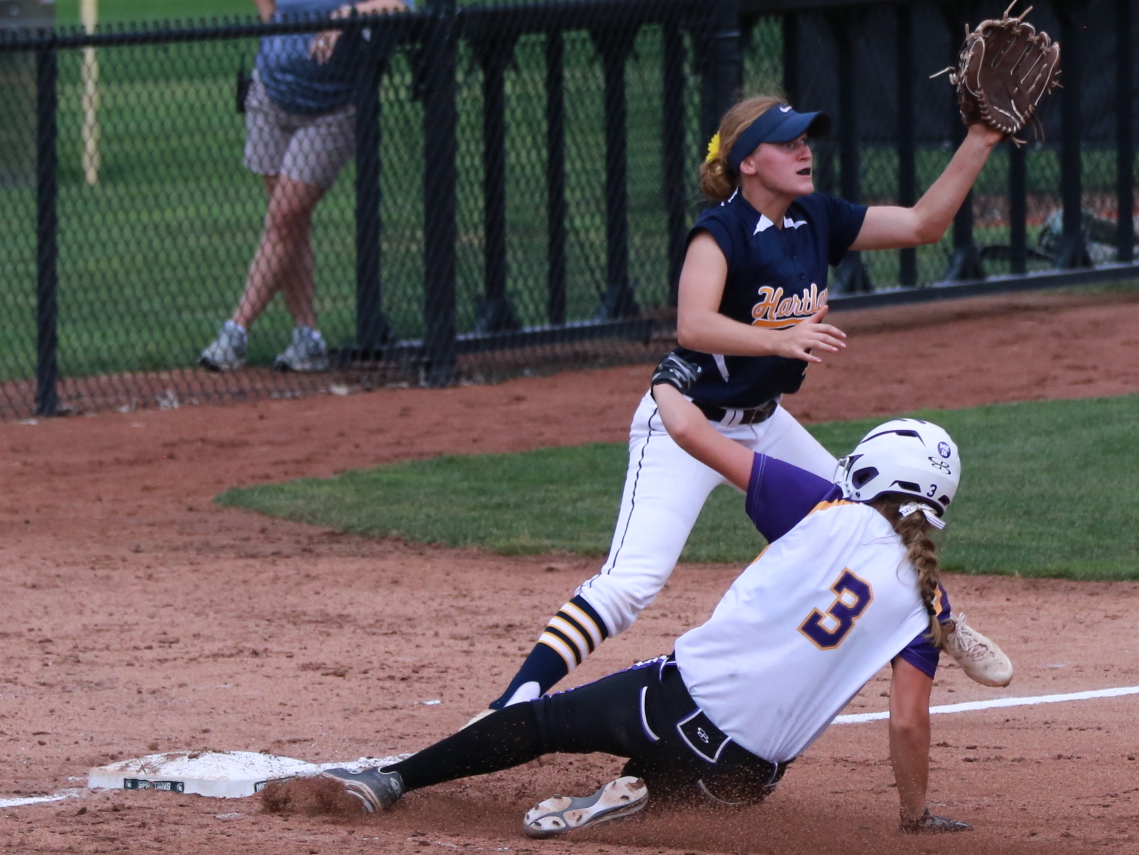 “Our pitching coach was talking to her all the time about how she had to make those adjustments, and we saw what she did with the adjustments in that last inning.”

The Fighting Scots (29-6) got down early, but a four-run, two-out rally in the third inning proved to be the difference.

“We had some miscues out there. We didn’t play super clean defense,” Hartland coach Bob Greene said. “No matter who you’re playing, that’s tough to come back from.”

It was Gehrls who started the rally with a single. She was the first of five Scots in a row to reach base, with four out of five recording hits, including a triple from Jadon Huyser that drove in a pair of runs and gave her team a 5-3 lead. Siewertsen also drove in a run in the inning, and Gehrls scored the other run on an error.

“Especially during the tournament season, we’ve really been coming through clutch with two outs,” Siewertsen said. “That’s just something that we’re pretty used to right now.”

“(The run in the seventh) was huge,” Siewertsen said. “We were only up by one and with only being up one and their hitting, that extra run, that’s a lot of confidence, especially for Sammie pitching, and for us backing her up.”

Mitchell, Gehrls and Huyser all finished with three hits on the day, while Emmalee Hamp had two.

Delaney Robeson had an RBI for Hartland (33-6), driving in a run in the fifth inning. Freshman Rachel Everett took the loss, striking out nine and walking none while allowing 13 hits and two earned runs as Hartland was making its first title game appearance since 1996.

“I think that this team fought hard. We were pretty resilient all year,” Greene said. “Give it up to Caledonia. They fought hard, they put the ball in play a lot, and eventually that was their success.

“Hartland has been very successful in athletics, and this morning we were talking with the athletic director and he said it’s kind of like kids all over the school, no matter what sport, believe that they can get here. I think this is good; this is more proof of that.”

VIDEO: A four-run third inning, capped by this two-run double by Jadon Huyser, gave Caledonia the lead to stay.

PHOTOS: (Top) Caledonia players celebrate clinching their first MHSAA championship in softball. (Middle) The Fighting Scots’ Abby Mitchell (3) slides into third base ahead of a throw.