She looked on in awe as players like Kylee Barrett and Megan Guitar – who both went on to star at Wayne State University – led the Pioneers to the Division 2 Semifinals in 2014.

So when Bob Young, the coach who was at the helm during that stretch, announced he was coming back to take over the Cros-Lex program for Gordon’s senior year, she was delighted.

“I was actually very excited, because I always grew up kind of idolizing him and his players – they had always been so successful,” said Gordon, who plays third base for the Pioneers. “For him coming back for our senior year, it kind of brightened us up. We were all very excited.”

Young is back in charge at Cros-Lex after a brief three-year retirement. He originally left, in large part, to spend more time watching his grandchildren play their baseball and softball games. When the job was set to be filled for the third time since he retired, however, he decided to come back.

“I thought I could help the program, help the system, that’s why I came back,” Young said. “(Retirement) was good. I have three grandkids in their 20s now, but the little ones, I have eight grandkids that are 11 years old or younger, and six of them live here in the Croswell area and are all playing ball. I wanted to be able to attend functions and not be strapped in with practices and games. It made sense to me to leave at that time.”

Young coached the Pioneers for nine seasons during his first stint, leading the program from 2007-2015. Over his final six seasons, Cros-Lex won five District championships, advanced to three Regional finals, and qualified for one MHSAA Semifinal. He also helped his sons, Andy and Scott Young, as they coached Cros-Lex to the 2011 Junior League World Series title.

“I definitely think (Cros-Lex) was a staple for softball in Michigan for high schools,” Cros-Lex senior first basemen Lena Stillson said. “They worked so hard, and they definitely benefitted from it. You would think of Cros-Lex, and softball came to mind immediately.”

Stillson and her teammates want to get back to that, and this season has been a good start. The Pioneers are 19-6 and confident as they close in on the postseason. 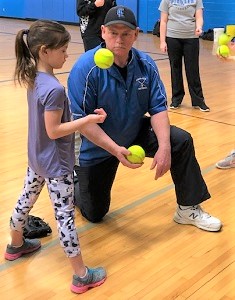 “We’ve had a pretty good season so far, and we’ve improved so much,” Cros-Lex senior catcher Haley Matthews said. “With every game, we’re learning more and improving more.”

The players agreed it was Young’s knowledge that played a big part in that, but his message has been a simple one.

“I definitely think he’s brought more confidence, and taught us that it’s all about fundamentals,” Stillson said. “If you don’t have fundamentals, you’re not going to grow. He definitely forces us to get better and think about the game itself.”

A staple of Young’s previous teams – outside of an all-state pitcher in Guitar – was great defense, and their ability to get players on base and put pressure on defenses. He’s working toward that now.

“We’ve won a lot of close games,” Young said. “We hit the ball OK, and our pitching is pretty accurate, but we don’t have a lot of speed. I’d like to bunt a lot more, so we work on bunting quite a bit.

“We’ve been learning, and we keep learning in every practice. They’ve surprised me, I think. We’re doing better than I thought we would. We’re, by no means, an elite team. But we’re doing OK.”

Young said the team bought into his coaching immediately, even though he had never coached any of them at anything other than a clinic.

“I knew a lot of these girls, I just didn’t have them in high school,” he said. “I think they all pretty much know that I know what I’m talking about. I think that’s a credit to them. Every one of them has been so open-minded and ready to learn and do as I asked them to do. They’ve been terrific. We haven’t had any issues at all, and that makes a difference. I ask them to do something, and they put their best foot forward and do the best they can.”

It’s Young’s past success that created that instant credibility, the players said, and he’s done a lot to prove their confidence in him was warranted. Now they’re confident they can compete for something they haven’t won since he left – a district title.

“Having a winning record coming off the past couple years, it’s definitely been a confidence boost for us,” Gordon said. “We know that our record shows that we’re pretty good. I think we’re using that confidence every time we go to the plate, step into the pitcher’s circle or onto the field.”