Participation in spring sports, following a similar decline in student-aged population in Michigan, has been on a decline statewide over the last decade.

But while some like baseball have experienced a slight bounce-back over the last few seasons, softball in particular has seen its numbers continue to fall.

Coaches and administrators in the Detroit area point to a number of factors intertwined that produced a snowball-like effect – and now it seems to have come to a head.

Three softball programs in the Catholic League Central, a division that competes at a high level statewide, don’t have sufficient numbers to field a junior varsity this spring. Many programs don’t sponsor freshmen teams for the same reason.

But for schools like Birmingham Marian, Farmington Hills Mercy and Livonia Ladywood not to have a junior varsity softball team is quite shocking to some – especially considering that Mercy enters this season ranked No. 3 in Division 1 and Ladywood is No. 2 in Division 2.

Marian athletic director Dave Feldman isn’t among those stunned. He saw this coming. Feldman points to the 2007-08 school year when the Michigan High School Athletic Association was forced, by court decision, to switch the volleyball season from the winter to the fall and the girls basketball season from the fall to the winter.

“It’s not AAU,” Feldman said. “But you need to be an AAU member (to play). They play all of the time. Heck, they played on Easter Sunday. And every club is filled.”

The pressure on athletes to play year-round is arguably greater now than it ever has been, and can come from coaches, peers and family – based on a frequent misconception that if athletes want to earn a scholarship, they better keep up with the Joneses or be left behind.

Feldman said he’ll back his daughter with whatever decision she makes. If she wants to play volleyball nine or 10 months a year, he’ll support that. But Feldman said, financially, it’s getting out of hand. He estimated between the cost of airfare, hotels and meals that he’ll spend $6,500 in support of his daughter playing club volleyball.

And, according to Feldman, the increase in attention on volleyball is affecting participation in other sports.

“(Girls) basketball is fighting for its life,” he said. “Our field hockey program (a fall sport) is fine. Our lacrosse teams are fine.

“We have 15 playing volleyball at all three levels. We had 16 (total) try out for softball and we made two cuts. We haven’t had a JV the last two years. The last time we had a freshman (softball) team was in 2004 or 2005. The last few years the numbers have dropped off. It’s the specialization.”

Warren Regina is another member of the Catholic League Central. Regina athletic director Diane Laffey also is the head coach for softball and basketball, and she said she thinks lacrosse has drawn some athletes away from softball – which makes sense, although the total number of girls playing high school lacrosse in Michigan has increased only about 1,000 over the last decade, while softball participation is down 4,000 athletes over the same time.

One should not use Regina as an example of decline – Laffey’s team won the Division 1 championship last spring and fields a softball team at all three levels. At the same time, Regina also has seen a rise in participation in lacrosse. There are 18 playing for both the varsity and junior varsity this spring, the highest participation in school history.

Mercy varsity softball coach Alec Lesko said, simply, that times have changed. Mercy reached the Division 1 Semifinals last season, just as Ladywood did in Division 2 the year before – yet despite this success, Mercy’s number of softball players also has declined. 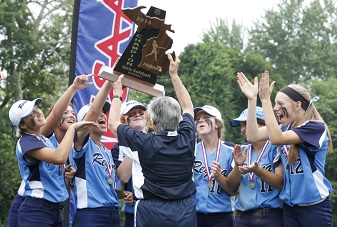 “(The students) have many more options,” Lesko said. “In addition to their school work there’s band, theatre, honors society clubs. In the past kids would play three sports and be in the band. All of my daughters were multi-sport athletes. By their sophomore year they had to make a decision (on which sport they would concentrate).

“It’s also economics. They want to earn a scholarship. You hear horror stories about (the cost of) student loans. Even the big schools have trouble getting the (students to play softball).

“As far as college, and I can only speak about softball, the Big Ten coaches want the player they recruit to play other sports,” Lesko added. “I hope to have a JV program next year. A player that misses 30 JV games, we will feel that crunch later. There are those who think JV softball is a waste of time, that you should just compete in travel (during the summer). We will get some of those kids. Those who compete in travel then come to us as sophomores.”

Don Peters is the softball coach at Clarkston, and between coaching travel and at the high school level he’s put in 35 years. He coached travel before taking over the Clarkston program. Peters said the two complement each another, or at least they should.

“I know some disagree,” he said. “The girls have a lot of choices in the spring. Look at all of the sports they can play. I don’t think lacrosse has cut into the numbers. Not yet, but it’s probably going to. We haven’t been affected. We have 45 (covering three teams) in our program. We really push softball in our community because it’s been established.”

Peters said coaches in softball and baseball need to make the game enjoyable, and one way is to reward those who chose to participate by playing them on a regular basis. A student who is No. 14 or 15 on a squad often will play once a week and, with all of the options available, isn’t willing to put in the practice time for limited game action.

Mercy senior first baseman Abby Krzywiecki played a variety of sports before her freshman year. It was then she decided that softball would be her main sport and she chose to pour all of her energy into it.

She said it’s not all gloom and doom for her sport.

“We had a small freshmen class (last year),” she said. “When I came in we had a large class. It was one of the biggest. It’s not that we’re not getting softball players. In the travel world, it’s becoming more intense. We have more younger people playing. The sport is getting more intense. The talent level is getting higher.”