But the University of Wisconsin recruit was pretty close.

Salo threw a second straight shutout at Secchia Stadium on the campus of Michigan State University, striking out 13 and not allowing a walk in Escanaba’s 5-0 win.

“I definitely think she’s the best pitcher that we’ve faced this year,” South Haven coach Wilma Wilson said. “We’ve faced some really good pitchers, but she was just living on the edge with every little thing and painting the corners and working the zone that the umpire was giving her. So no, we have not faced anyone like her this year.”

The MHSAA title was the first in program history for the Eskymos (31-3), who were making their third straight appearance in the Final Four, and first title game appearance since 2003.

“It feels amazing,” Salo said. “The last time Escanaba brought home a state championship was 1981 (in Class A football), and to bring home another one is really cool.”

To clarify: The Eskymos frequently claim MHSAA Finals titles in sports where the peninsulas play in separate divisions. But Saturday’s victory clinched Escanaba’s first championship in a statewide tournament since that 1981 football win – although the softball team long has been considered among the state’s elite regardless of peninsula.

Salo set the tone early Saturday, striking out 11 of the first 13 batters she faced, including the first eight. She did this despite a 25-minute rain delay that began two strikes into the second at-bat of the game.

“We just kept ourselves up and went out there and played like we were playing,” Salo said. “It didn’t bother us.”

Salo, who also shut out Eaton Rapids in the Semifinal on Thursday, finished the season with an earned-run average below 0.40.

“She was absolutely incredible,” Escanaba coach Jamie Segorski said. “It’s hard, you know, because we’ve come to expect it. She does it continuously. The bigger the game the better she pitches, and it’s a credit to all the work she puts in. Nobody works harder; nobody works longer. As a matter of fact, when she leaves here today, she’s going to be playing this weekend in Ohio. She doesn’t take breaks; she just plays.”

Escanaba catcher Dakota Cloutier knew coming into the game that her pitcher was going to be tough to hit – although she comes into most games with that feeling. 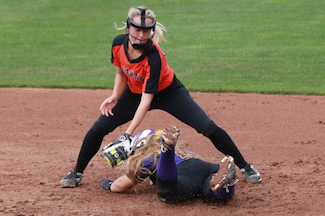 “She was on another level today,” Cloutier said. “She was pitching harder and pulling through all her pitches more than she ever has before.”

The game ended with a Salo strikeout, this one on a called strike, and one the umpire took a second to signal.

“When you’re waiting for changeup to float in there like that on that last pitch, I think (the umpire) was even surprised,” Segorski said. “That was a great pitch. It just takes a second to get the call, and we were all waiting and watching, and it was awesome.”

Salo was given all the run support she needed in the first inning, as Madison Griffin drove in Lexi Chaillier with a double.

While South Haven pitcher Hayley Kreiger was strong after that, the Eskymos were able to push across two unearned runs in the fourth inning with two outs, as Nicole Kamin scored on an error and Cloutier drove in Savannah Barron with a double.

“It was awesome,” Segorski said. “It’s a relaxed feeling for the hitters when they go up there and we have a nice lead. All they have to do is go up there and square the ball, and they did it. For Heather Bergstrom to come in as a pinch hitter and drive that one to right center was fantastic, and for Savannah Barron to end her high school softball career with a double and drive in an insurance run for us is an amazing feeling for her. It goes all the way through. Just a bunch of amazing kids who did an amazing thing.”

Kreiger finished with nine strikeouts of her own, allowing seven hits, one walk and three earned runs.

“She’s been our workhorse, and she’s the one we’re going to match up against anybody,” Wilson said. “Give them kudos, though; they had some nice line-drive hits and put the ball in play better than we did. “Hayley’s been there for us all year, and even came up with a nice hit there in the last inning to end her high school career. She’s been on the varsity for four years and been just a key player for us for four years. That’s the kind of player you build around, and our senior group in general is just a great group of athletes that work hard and are super gritty.”

VIDEO: Gabi Salo struck out the first eight batters she faced and gets her 13th strikeout here to finish Escanaba's 5-0 win.