EAST LANSING – Its hopes of playing for another state championship were dwindling as the Millington softball team was down to its last strike in Friday morning’s first Division 3 Semifinal.

However, two big swings changed the Cardinals’ fate and paved the way to an improbable finish.

Top-ranked Millington rallied with three runs in the bottom of the seventh inning to pull out a dramatic 4-3 win over Algonac at Secchia Stadium.

“I knew we could come through,” Coleman said. “We’re a family, we play for each other and I knew when Ashley got on base that I could score her in that position.”

Ziel, a senior pitcher who struck out eight, tied the game with two outs and with her team trailing 3-1. She drilled a 0-2 pitch to the wall to score Shannon Ziel and Emma Dickie.

“We always train to be in these situations, and you never know when you are going to be in it,” Ziel said. “I just thought that I had to get on base, I have to win this for my team.

“I saw that pitch coming and I just took a swing at it, and I saw it go to the fence and I thought, we’re tied. I knew Leah was going to pull through, and I knew right when we scored that we were going to win that game.”

The Wildcats defeated Grandville Calvin Christian 6-1 in the other Semifinal and will seek their first Finals title.

Algonac (33-4) took the early lead when junior slugger Ella Stephenson homered to left center in the top of the first inning. It was her 17th of the season.

The Muskrats increased their lead in the top of the sixth. Sierra Vosler opened the inning with a triple and then scored on Brianna Thomason’s infield single to make it 2-0.

Millington’s Trinity Fessler delivered a two-out RBI single in the bottom of the inning to trim the Algonac lead in half.

Stephenson, who went 3-for-4, singled in the seventh inning, went to second base on a passed ball and then scored when Jaycee Reams ripped a two-out single up the middle to make it 3-1.

Millington coach Greg Hudie said the tight-knit bond of his team was a factor in the come-from-behind win.

“I think it has a lot to do with how close they are as a family,” he said. “They train hard together all year long, and I think that’s what really put it together. Not giving up on each other even though we were down and our backs were against the wall.

“Most teams would probably be starting the bus, but I thought they did a great job and you couldn’t ask for a better finish.”

Algonac pitcher Kenna Bommarito, a sophomore, struck out 10 and held down a potent offense until the final inning.

The fourth-ranked Muskrats outhit Millington 9-8, but left several runners on base and were unable to get the final out to secure their first trip to the Finals.

“We can’t seem to get the big one,” Algonac coach Len Perkins said. “We had them right where we wanted them, but they hit the ball and made the difference.

“They found holes at the right time, and that’s softball. You have to come up with the big play, and they got the big hits. We had our chances, but didn’t get hits in those situations. They did, and you have to give them credit.”

The unranked Wildcats (32-8-1) overcame an early deficit to score five runs in the second inning. 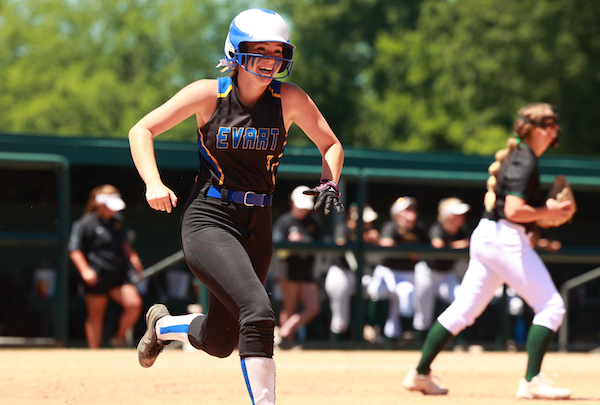 Evart banged out eight hits, including six in a row, in the inning and took advantage of two Calvin Christian errors to gain control.

“It was probably the best inning we’ve had the whole season,” sophomore catcher Ally Theunick said. “It was awesome. We were all energized, and we were getting hits all over. It didn’t stop.”

Evart coach Amanda Brown said her team has had previous stints of timely hitting. Four of the five runs came with two outs.

“We found the fire, and it worked out beautifully,” she said. “We’ve had two other games like that where we had two outs and we scored six or seven runs like that, and it's just fun. No one wants to be the last out.

“The hitting is definitely contagious with any of these girls, and once something gets going they just run with it and they feed off it. Our dugout was amazing, and they did a great job.”

Evart tacked on another run in the fourth inning. Kylynn Thompson smacked a double to score Theunick.

The Wildcats’ defense shined once again and allowed only one run for the seventh straight postseason game.

“Our defense has been phenomenal,” Brown said. “They work their tails off, and we do so many fundamentals. We tell them all the time that fundamentals will win or lose games. Make the play when it’s presented, and make the best of it.”

Calvin Christian went ahead 1-0 in the first inning when Emili Goodheart singled home Anna Voet. It was the only run the Squires would muster against junior pitcher Addysen Gray, who struck out eight and walked one.

“It feels great to know we are playing for a state championship, and to have our whole school here feels so good,” said Gray, who also went 3-for-4 at the plate.

The Wildcats finished with 12 hits as Skyler Baumgardner, Brooklyn Decker and Thompson had two hits each. The Squires, who finished 34-4, had only four hits and were plagued by five errors.

PHOTOS (Top) Millington players and fans celebrate during Friday’s first Division 3 Semifinal at Secchia Stadium. (Middle) Evart’s Katelyn Gostlin enjoys the moment on the way to first base during her team’s Semifinal win.