Still competitive and well coached, the Stevensville Lakeshore 2016 varsity softball season had the air sucked out of it shortly after it began. In early April, the Lancers lost their ace and their best glove to injury.

Shortstop Lindsay Zavoral, now a senior, tore an anterior cruciate ligament and was lost for the year. Top pitcher Taylor Simon’s nagging back problems — the result of a slipped disc — finally forced her to tap out in search of remedy to end her sophomore campaign.

The Lancers failed to advance from Districts for a second straight season.

This season, however, is what Lancers fans have grown accustomed to under the longtime leadership of coach Denny Dock. Lakeshore (30-6-1) won the Southwestern Michigan Athletic Conference championship and defeated St. Joseph 6-0 in the Division 2 District Semifinal last weekend before topping South Haven 3-0 in the championship game. It was Dock’s 19th District title in his 28 years in charge of the program.

Some of the highlights from the District tourney included Sierra Ciesielski’s home run and two RBI, Zavoral’s pair of doubles and Simon’s complete-game shutout against the Bears. She allowed only three hits and struck out four. Simon threw another seven innings in the victory over South Haven, collecting eight strikeouts and giving up just two hits. Zovoral connected for three singles, and Ciesielski singled and tripled and finished with one run driven in.

Stevensville Lakeshore, which ended last season in the District semis, faces No. 4 Vicksburg on Saturday in the Regional Semifinals at Edwardsburg. Vicksburg put together a 16-2 record in the Wolverine Conference for a league title. The Bulldogs fell to Richmond 2-0 in the 2016 Division 2 championship game. 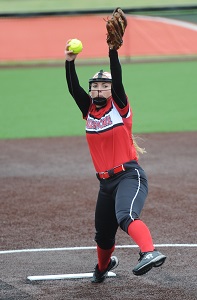 “That has certainly solidified our ball club,” Dock said of Zavoral and Simon returning this spring. “That’s kind of where we’re at right now. It’s not surprising to me at all (we’re back in the Regional tournament). I knew the caliber of kids those two were when we lost them. Getting them back put us in pretty good shape. (Zavoral) is an inspiration to the whole team.”

“It’s amazing to be back on the field this year,” Zavoral said. “After going through surgery, I didn’t realize how emotionally hard it would be not being able to finish the season with my team last year. It just gave me more motivation to work through the summer and get back even stronger this year.”

Simon has put together a phenomenal junior season – especially considering the No. 6-ranked Lancers’ tough schedule – with a 17-5-1 record and a 1.90 ERA in the circle. She started in a 0-0 tie in nine innings against Division 1 honorable mention Caledonia, and faced Mattawan, which is ranked No. 5 in Division 1, three times. She started four games against honorable mention Portage Central and picked up a win against Crown Point, which is headed to the Indiana Class 4A state finals.

“I realized how much I missed it,” Simon said of returning healthy this spring. “You want to be out there so bad.”

Simon has struck out 191 batters over 147 innings. She’s been pretty effective with a bat in her hand, too, entering this weekend with a .426 batting average and 40 RBI (second on the team in both categories).

“She has taken on the big dogs,” Dock said. “She is really a bulldog out there; I’ll tell you that. She throws a nice rise ball. I think the main thing she has been able to do is spot her pitches.”

The Lancers’ defense has been outstanding this season as junior Cassidy Zavoral has moved back to her natural position at third base after filling in at shortstop for her sister last year. Senior Olivia Freehling was an all-state selection (designated player) in 2016 and has staffed first base this year. Freehling, who also played golf and hockey, leads the squad with a .432 average and 43 RBI.

“Our defense has been really good this year,” Freehling said. “We’re a lot stronger having Lindsay back at shortstop. It makes a huge difference. We’re going into (Saturday) 100 percent confident.”

PHOTOS: (Top) Stevensville Lakeshore shortstop Lindsay Zavoral receives the ball as a runner gets to second base during a game this season. (Middle) Taylor Simon prepares to unload a pitch against St. Joseph this spring. (Photos by Don Campbell/St. Joseph Herald-Palladium.)