EAST LANSING – Owosso High School sports hadn’t done much on the state finals level over the last couple of years – until Saturday.

The championship was Owosso's first MHSAA Finals title in any sport.

Irelan won all 37 games for the Trojans (37-3) this season, but none bigger than Saturday’s.

“We fell behind, but we wanted to come back to show we deserved this,’’ said Irelan, who had an 0.55 ERA coming into the game. “It was a good team win. How the game worked out and how it went, we were going to do our best.’’

No-hit through two innings with four strikeouts, Marysville’s hitters looked like they were in for a long morning against Owosso’s Irelan.

That all changed in the third inning when pitcher Kirsten Smith helped her own cause with a three-run homer.

“I can’t tell you how many years this game took off my life,’’ said Owosso coach JoEllen Smith, who has led the program to 808 wins since taking over in 1983. “That was a huge emotion. Then we had a couple of plays that went against us. Our kids muscled through it. Postseason has been huge for us. They’ve never given up.’’ 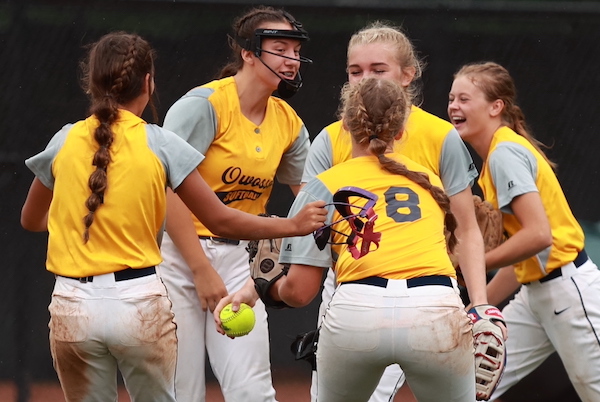 Owosso got on the board first on an RBI double up the centerfield gap by first baseman Reyn Tuttle in the first inning. Jamie Maier stretched the lead to 2-0 on a blast over the centerfield field fence to lead off the second.

Irelan had the Marysville hitters under control until the third inning. She gave up singles to Brandi Bassett and Avery Woodard before Smith stunned Owosso with a three-run homer over the centerfield fence to give the Vikings a 3-2 lead.

“Give Owosso credit; their pitcher is tremendous,’’ said Marysville coach Ryan Rathje. “We got some hits off her and put the ball in play. Owosso has some strong bats throughout their lineup. They were able to come up with some key hits, and they had some good defensive plays.’’

Marysville (31-7) – making its first championship game appearance since 1991 – continued to pound the ball, getting a homer from Callie Perrin to make it 4-2 in the fourth inning. Avery Wolters followed with a double. An error made it 5-2 and it would’ve been worse, but the Vikings had a runner thrown out at home.

Owosso began its comeback in the bottom of the fourth inning, leading off with three-straight singles followed by Madyson Rainey’s hit driving in a run to make it 5-3. Irelan came through with a double to center to tie the game at 5-5 with Marysville still looking for the inning’s first out. Owosso then took a 6-5 lead on a bounce-out to complete the four-run rally.

The Trojans added two more runs in the fifth inning. Kendall Anderson doubled and scored when Sydney Somers laced a singled to center. A throw trying to catch Somers at second went into the outfield, and she eventually scored as well.

Marysville led off the seventh inning with consecutive hits to put runners at first and third. But Irelan got two pop flies and a strikeout to seal the victory.

PHOTOS: (Top) Owosso catcher Karley Kincaid gets a tag down as a Marysville runner reaches for the plate. (Middle) The Trojans celebrate after the last out of Saturday's Division 2 Final.