“We would get the gym one night a week, and we’d play something,” she said, recalling her days at Whitmer High School in Toledo, Ohio. “There weren’t a lot of opportunities.”

The introduction to sports was all she needed, however, to form a lifelong passion for athletics. Johnson is starting her 50th season this week as softball coach at Morenci High School in south central Michigan. The school is less than two miles from the Ohio border but has long been on the Michigan map when it comes to sports.

Much of that credit belongs to Johnson. She’s coached multiple generations of Bulldogs athletes. At one time she coached four sports – basketball, volleyball, track and softball.

“In the winter we would have basketball practice until 5, then the girls would spend the next half hour working on their spring sports,” she said. “I would catch our softball pitchers in the gym and our track athletes would put some work in.”

In the spring of 1976, Johnson coached Morenci to a league championship in softball and the Lower Peninsula Class D track & field championship.

“We were very successful in the 1970s,” she said. “We got a head start on a lot of people. We had all of our sports going pretty strong those first seven or eight years.”

Johnson arrived at Morenci at about the same time Title IX was becoming law. The legislation protected people of all genders from discrimination in education programs or activities that receive federal financial assistance.

Morenci, she said, got a leg up on other schools in the area when it came to sports. Part of that was the push she gave sports at the school.

“I knew in the eighth grade that I wanted to be a physical education teacher,” she said. “Out of high school I went to Adrian College, and I played everything I could. I played basketball, field hockey and volleyball and played two years on the tennis team.

“Adrian encouraged women to get involved in sports, so I was fortunate there, too.

“At Morenci, we had a superintendent, Harold Hall, whose daughter was a good athlete, and he wanted her to participate in sports. It didn’t happen overnight because of Title IX, but it developed. We had a lot of girls participate.” 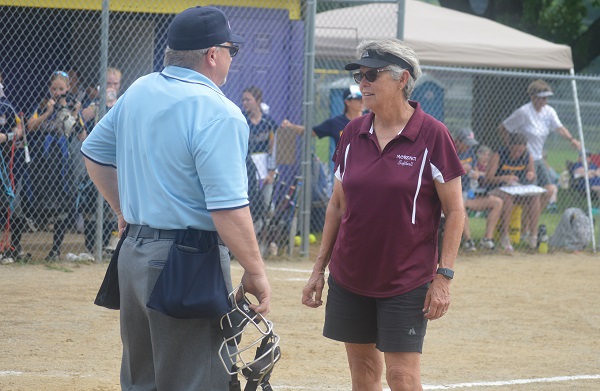 She didn’t necessarily dream of one day becoming a coach but accepted the role when she got to Morenci.

“I was the physical education teacher,” she said. “It was kind of assumed the PE teacher would be a coach. They sort of just gave me the sports to coach. I was okay with it.”

There were some growing pains with girls athletics.

“In the winter, our basketball team would have to wait until after wrestling meets to have a practice,” she said. “Some nights our practices were from 9:30 or 9:45 to 10:30. Most of our girls did two or three sports. Finding gym time was a struggle.”

Things that athletes take for granted these days, such as uniforms, were also difficult to come by.

“We wore the same T-shirts for all of our sports the first few years,” she said. “It wasn’t until we pushed for it that every sport had their own uniforms. I don’t think anyone was suing anyone in Morenci back then, but there were little pushes here and there to make things happen. I don’t even remember when the pay for coaches started evening out. Nothing happens without a push.”

Over the years, however, Title IX took hold and athletes from Morenci and all over the state and nation benefited.

As the seasons grew and things evolved, Johnson eventually stopped coaching varsity track & field, volleyball, and basketball, although she had huge successes in each sport. Johnson was teacher for 23 years and middle school principal for 15. After retiring she went a couple of years without a formal title but covered assorted duties such as middle school volleyball coach, volleyball scorekeeper, filming for boys basketball and football and running concession stands. Soon, she became athletic director, a position she left a few years ago.

Softball, however, has remained her constant.

“I’m still challenged by it,” she said. “That’s what keeps me coming back.”

The Bulldogs went 19-14 last year and won the 25th District title of Johnson’s tenure. She also has 11 league titles, nine Regional titles and two Class C Finals championships (1985 and 1986) in softball. Her 949 career wins put her firmly in the top 15 among the state’s all-time winningest softball coaches. Technically the 2022 season is No. 49, although she’s been coach for 50. The 2020 season was canceled due to COVID-19.

“I still coached all winter to get the girls ready,” she said. “We just didn’t have a season.”

Johnson said she has been happy coaching at Morenci. In 1978, she briefly coached basketball at another Lenawee County school when it appeared Morenci was not going to have high school athletics due to a millage not passing. She was juggling coaching the girls at Morenci and at another school, but when the millage passed and sports were restored at Morenci she gave up the other school.

“I’ve never really looked to go anywhere else,” she said. “I never looked to coach in college. The recruiting never interested me.”

Johnson has 23 athletes in the Morenci softball program this year including some who have not played softball before, meaning she’s teaching the game almost from the bottom up.

“I just have to be patient,” she said. “I enjoy the challenge of seeing where we start to where we end. I’ve never been one to coach to win the first game of the season. I want to win the last.”