EAST LANSING – Trenton and Essexville Garber are not used to making long runs in softball.

In fact, most of the players on both teams weren’t even born the last time their schools reached the Softball Semifinals.

The newcomers put on a show Thursday on the state’s biggest stage, with Trenton holding off Garber, 2-1, in a classic pitcher’s duel at sunny, windswept Secchia Stadium.

“We just told them to believe,” said third-year Trenton coach Rick Tanguay. “Believe it’s going to happen and believe you’re going to put the ball in play. I’ve had a lot of these kids since they were 9 or 10 years old, and I’m proud of them.”

Trenton (34-10), which lost in the Division 2 Final in 2005 and had not been back to the Semifinals before this season, will play perennial power Stevensville Lakeshore in Saturday’s 12:30 p.m. championship game. Lakeshore defeated Escanaba, 2-1, in Thursday’s last Semifinal.

The Trojans had to come from behind to advance, after Garber jumped out to a 1-0 lead during the first inning.

Kortney Kotenko, a junior catcher, belted an RBI double to bring the big crowd from Essexville to its feet. The Dukes previously lost in the Class B Final in 1997, but hadn’t been back to the state’s Final Four until Thursday.

Garber would keep that 1-0 lead until the fifth inning, as junior pitcher Sarah Basket kept the Trojans off-balance.

Trenton finally broke through by manufacturing single runs in the fifth and sixth innings. Pinch-runner Jordyn Emery scored on a fielding error in the fifth, then sophomore shortstop London Williams singled to left in the sixth inning to score Maddie Dobbs.

The Dukes put the pressure on, as Basket singled and then Jacqueline Brinkman was hit by a pitch. After a double steal, Garber had runners on second and third with two outs, before Johnson was able to shut the door with a strikeout.

“I have to be confident out there for my team, but that last inning was rough,” Johnson said with a smile. “I was trying to hide it, but I was nervous out there.”

Johnson may have been battling nerves on the inside, but it didn’t show in her stellar performance. The Siena Heights commit finished with just four strikeouts, but she kept the Dukes guessing for most of the game and allowed just four hits and one walk.

Tanguay said it was a classic performance by the battery of Johnson and her senior catcher, Olivia Hickman, who are two of just four seniors on the Trojans’ 16-player roster.

Matching her every pitch along the way was Basket, a junior, who finished with a five-hitter, no walks, one earned run and nine strikeouts.

Garber (35-9) is an even younger team than Trenton, with just three seniors on the 16-player roster. The Dukes relied on their stellar junior class to pull out several come-from-behind victories in Districts and Regionals en route to MSU.

“You know, this is the first time we’ve been this far in 25 years – and 25 is a long time,” said second-year Garber coach Chris Kokaly. “Losing by one run is hard because you think about all of the opportunities we had where we just needed a key hit. We’ve been getting those hits all season and today, it just didn’t happen.”

Lakeshore advanced to the championship game despite having just two hits in the Semifinal, both of them singles.

The Lancers (39-4) played small ball and took advantage of Escanaba miscues to manufacture single runs in the first inning and the sixth inning, and that proved to be just enough. 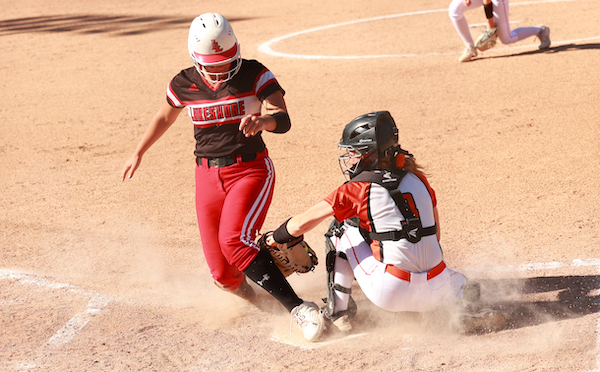 “The girls believe in their pitchers and their defense,” said 43rd-year Lakeshore coach Denny Dock, who ranks third in state softball history with 1,055 victories. “If we could get our bats out of the deep freeze, we’d be pretty good.”

Mullen set the tone by getting the first five outs of the game by strikeout. She kept cruising until the top of the sixth inning, when Escanaba used a walk and a solid single to right field by senior Lizzy Silva to tie the game, 1-1. After McKayla Mott singled, Dock decided to make a pitching change – bringing in Atwood with two runners on and two outs.

To say the decision turned out good is an understatement.

Atwood got the next hitter to pop out to the catcher on her first pitch, then struck out the side in the top of the seventh to get the win.

“I knew that Avery would do great, and she did,” said Mullen, who finished with 10 strikeouts. “I’m super proud of this team. We’ve worked on our attitudes and staying positive, and I really think that was a big reason why we won today.”

Gianna Kerschbaum and Gabby Solloway had the lone hits for Lakeshore, which has scored just five runs over its last three games – all wins – including a 2-1 victory over Wayland in the Regional Final and a 1-0 win over Jackson Northwest in Tuesday’s Quarterfinal.

Dock, also the longtime football coach at Lakeshore, has led Lancers softball to seven Finals championships, the most recent in 2015. Lakeshore finished runner-up in Division 2 in 2019.

Escanaba (30-6), which won Division 2 titles in 2018 and 2019 and made the Semifinals for the fifth time in six seasons, was out of sorts from the start Thursday. Mott relieved the starting pitcher after two walks and a wild pitch and threw most of the game, before freshman Grayson LaMarche relieved her in the fifth inning and took the loss.

“When two great teams play it comes down to a couple of plays, and that’s what happened today,” said second-year Escanaba coach Andy Fields. “Overall, this season was a phenomenal ride.”

PHOTOS (Top) Trenton’s Jordyn Emery scores her team’s first run in the fifth inning Thursday. (Middle) A Lakeshore runner gets across the plate just before the tag by Escanaba’s Carney Salo.