EAST LANSING — There was a moment early on this season when Unionville-Sebewaing head coach Isaiah Gainforth had some doubts as to just how good his Patriots were going to be.

But all those doubts were erased as his team celebrated its 36th-straight victory in the Division 4 Final against Rudyard. The Patriots’ 14-1 win over the Bulldogs capped off a remarkable season which saw the team break or tie three championship game records Saturday afternoon.

“We started the season 4-3,” Gainforth said after his team captured its second-consecutive state title. “Obviously, you go without the year last year, so you don’t know who your team is, what its makeup is. You didn’t know what you had. It took a while. We weren’t pushing the panic button. We were playing the tough part of our schedule early on.”

Gainforth’s team righted the ship. The offense started hitting the ball, while senior starting pitcher Brynn Polega did her thing to near perfection.

“We just got on a roll. They’re just smart hitters. They understand hitting,” said Gainforth, whose team hit better than .400 for the season. “Considering where we were after game No. 7, up to now, I wouldn’t have guessed that. Once we got into the league and got it going, we just kept adding up the runs.”

USA (40-3) broke the record for hits in a championship game, collecting 20 against the Bulldogs. The previous record was 17, shared by Jenison (Class A, 1988) and Millington (Division 3, 2019). Eight players had multiple hits, including senior Emily Rieman, whose four hits tied a championship game record.

“It was my last game and I was like, ‘Bring it all, or nothing,’” said Rieman, who also scored two runs and drove in three more. “In the beginning (of the season), we were like, ‘Execute, execute, execute. Don’t miss a pitch. If it’s there, you at least have to foul it off.’ Our coaches have been there with us since the beginning, and that’s all we’ve been doing is practicing our hitting. 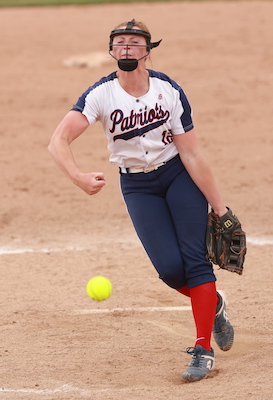 Polega, who had two hits herself at the plate, picked up the win in the circle. In the process, she set a championship game record for strikeouts in seven innings, with 19.

“I felt really good,” said Polega, who will play at Northwood University next year. “My warmup, I went to the bullpen and it was probably the best one I’ve had all year. I came out of the bullpen and told the coaches, ‘I’m ready. It’s game time. I’m ready.”

Polega retired the first 10 batters she faced, eight by strikeout. Rudyard senior Desta MacDowell’s one-out walk in the fourth inning broke up Polega’s perfect game. MacDowell would come around and score on an RBI single by sophomore Meagan Postma. But that’s all Rudyard would get.

“Brynn is a stud. Any game she pitches in, any game she will pitch in for Northwood, they’ll have a chance because she’s a gamer, just an absolute beast,” Gainforth said. “I’m so glad she’s wearing the red, white and blue.”

Rudyard proved it is a program on the ascent, having reached the Division 4 championship game this season after capturing the school’s first-ever Regional title in 2018 and following it up with two more Regional championships in 2019 and 2021.

“We’re happy to be here,” Rudyard head coach Stephen Davis said. “We had a great year. We have to look at what we did and enjoy it. It was fun to watch the kids we brought up from the JV get a taste of this. They’ll want to come back. They’ll want to be up on that stage. We’ll use that for motivation for the future.”