Watervliet took the concept of a banner season to another level this spring as the Panthers posted a pair of perfect seasons in Southwestern Athletic Conference Lakeshore play.

A baseball team with only three seniors went 12-0 in the division and was matched by a softball squad featuring only one senior that also ripped through that half of the league to a 12-0 mark. It was the first division title for the Panthers in softball since 2006 and was a return to the top spot for the baseball team after a championship in 2018.

For 11th-year head coach Josh Tremblay’s baseball program, which is 19-12 heading into Division 3 District tournament play this weekend, it was a result of great starting pitching from junior right hander Andrew Chisek – who racked up an 11-2 record on the bump with a 1.83 ERA – a do-anything-to-get-on-base mentality and superb defense.

The Panthers have a .783 on-base percentage as a team and boast six players with 25 or more hits. Chisek leads the team with 34 hits, while senior outfielder Josh Reeves sits at 31, sophomore first baseman Bryton Cockrun and sophomore pitcher/infielder Tyson Williams have 27 apiece and both freshman pitcher/infielder Wyatt Epple and junior outfielder Ethan Fish have 25. Chisek and Cockrun are tied with a team-high 22 RBI.

Freshman Chase Tremblay and Williams each earned three wins on the mound and helped contribute to a team ERA of 3.59. Senior Evan Hutchins has been a team anchor behind the plate with only 11 passed balls allowed. Chisek has a team-high 66 strikeouts, and Williams is right behind with 60.

“(Chisek) was one of our better pitchers in 2019, and he had a taste of success that year,” Tremblay said of the year Watervliet made it to the Division 3 Regional Semifinals and lost to Bronson. “He was pretty excited about getting back at things. He has been good there for us. We actually have about eight guys that can pitch, but we’ve been fortunate that we haven’t had to do that deep in our rotation. We knew that would be one of our strengths this year that we would be pretty deep in terms of arms.”

Watervliet has given up just 65 walks all season, which has helped out an already phenomenal defense. But with the bats in their hands, the Panthers buttered their bread by bases on balls (103) and taking shots to the body (41).

“We just try to get on base and be pesky. We just try to bang out base hits, run the bases and try to score some runs,” Tremblay said. 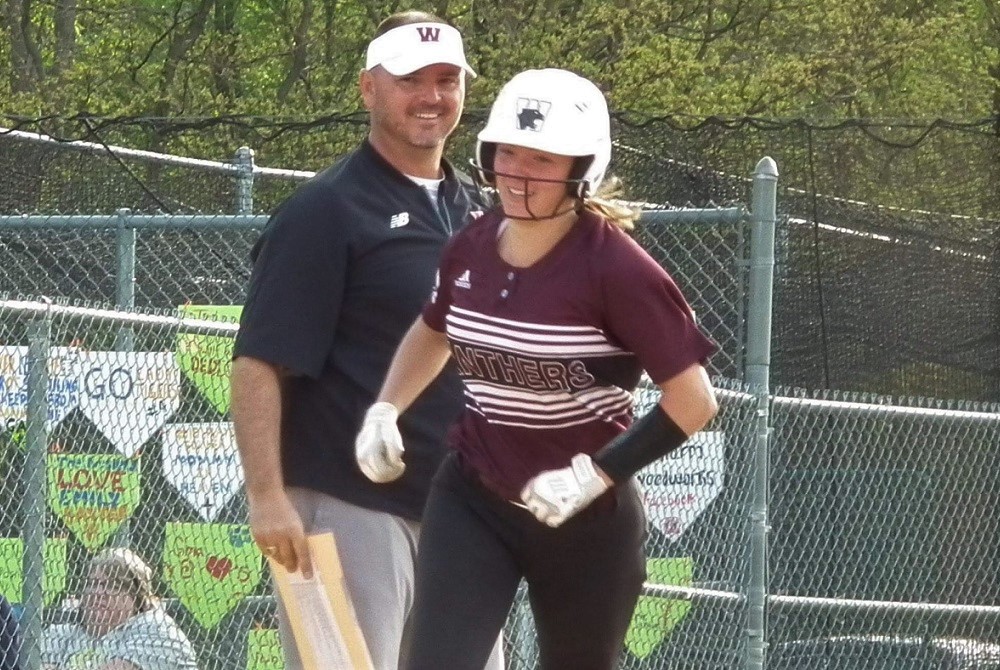 The Panthers will be pesky for a while with so many players returning next season.

“We’re a really young team, so coming into the year we didn’t really know what we were capable of,” Chisek said. “We figured out we were a really good team, and it has been fun to play with these guys. What clicked for us early on was pitching. All of our pitchers throw strikes, which gives our defense the opportunity to make plays. We started hitting the ball, and that took more pressure off the defense.”

And now their goal is a D3 District title. Watervliet takes on Niles Brandywine on Saturday in the semifinals. The two teams clashed earlier in the year and split a doubleheader.

At 28-5 this year, the Watervliet softball team is riding a 13-game winning streak into the postseason, which begins Friday with a District Semifinal matchup versus Fennville.

Head coach Tom Golden’s scrappy young squad has used speed as its primary weapon during a historic season. Besides seven home runs, freshman shortstop Grace Chisek has 61 hits and 60 RBI this year, having stretched 11 of those into doubles and eight into triples en route to a .635 batting average.

“We’ve all played together for so many years, and we connect well,” Chisek said. “Our bonds are good, so being young doesn’t really hurt us. We talk about what the pitcher is throwing and adjust. And there’s just a lot of speed on our team.”

Slapper Sammy Dietz, a sophomore third baseman, also has registered 61 hits with 19 RBI and a team-high 58 stolen bases in the leadoff spot, while freshman Abby Whorton, an outfielder and catcher, has 47 hits with 16 doubles, eight triples, four homers and 52 RBI.

“Our defense is pretty solid because we have athletes, but we’ve had to put up some runs,” Golden said. “Making good choices at the plate, swinging at good pitches and finding a way to get on — not necessarily by just hitting the ball, but by having quality at-bats.

“With our speed, a routine groundball becomes something pretty exciting because we get out of the box pretty quick.”

Rival Coloma has been Watervliet’s biggest hurdle “over the last four or five years,” Golden explained. The Panthers swept Coloma this season, and they will square off again if both teams advance to the District Final as expected.

“They won state a few years ago and have been the top dog,” Golden said. “We finally beat them for the first time since 2016 to win a (SAC) divisional title. That was definitely one of our goals, and we took care of business.

“That’s the thing about this group, is that it doesn’t really matter who we play. We’re a young team with only one senior, but we have a lot of young talent that has played a lot of softball. They just really enjoy going out to play.”

PHOTOS: (Top)The Panthers baseball and softball teams celebrate their matching SAC Lakeshore championships this spring. (Middle) Watervliet’s Grace Chisek rounds third base on the way home for a softball team bringing a 28-5 record into this weekend. (Photos courtesy of the Watervliet athletic department.)