Ishpeming Westwood’s girls basketball team was two hours into a three-hour trip to its Division 3 Regional Final on March 12 when the Patriots were told to turn the bus around and come home.

In an instant, the 2019-20 school year – and with it all MHSAA sports across the state – had come to a halt. And two months later, the high school world and its sports community continue to wait for bits of normalcy to return.

On Wednesday, we were able to enjoy a little bit of normal that’s been part of the annual MHSAA calendar for three decades. A Zoom call brought together 31 families from all over the state along with MHSAA staff and Farm Bureau Insurance CEO Don Simon to celebrate this year’s MHSAA/Farm Bureau Insurance Scholar-Athlete Award winners.

Living rooms, kitchens and home offices replaced Breslin Center as settings for this “virtual” ceremony. And yet, this ceremony may be remembered more than any other because of its necessity – due to the COVID-19 pandemic – and because of how it brought so many together, remotely, while the coronavirus has forced all of us to remain apart.

Below is the ceremony, in full, including words from Simon, MHSAA Executive Director Mark Uyl and Assistant Director Andy Frushour and, for the first time, a student speaker from the class – Ishpeming Westwood senior Madelyn Koski, who was part of that basketball team destined for Sault Ste. Marie. A brief Q&A with Koski follows.

Koski was an all-stater on the court who would’ve finished her high school career with four varsity letters each for hoops, tennis and softball. She will continue at Ferris State University, where she’ll pursue a degree in pharmacy and continue her basketball career.

It was easy to write the sad part, because I know what happened – I was there. But it was hard for me to make a positive spin at the end because I don’t think anyone’s over it yet. I was glad to be able to turn it into something that was bigger than sports … more about our whole lives and less about our time in high school.

Second Half: It’s been two months. How have you been navigating the disappointment, the sadness? And is there advice you’d give to other people your age trying to do it?

As time went on, it got a little bit better. The day after was pretty sad; that’s all I could think about. Now there’s so many other things to do – the weather’s nicer, we can go outside. And I’m playing college basketball – not everyone has that chance – but at least I have that to practice for, look forward to.

Second Half: Even though you can’t be with them and hang out with them, I’m sure you’re talking a lot of your friends and teammates. What kind of conversations are you having? Is it looking ahead? Is it still thinking about, “We’d be playing softball right now?"

I think we kinda tried to leave the basketball stuff in the past because it was too sad to talk about. We made sure we do talk, obviously not in person, but on social media or FaceTime, we just talk about our memories and everything. That helped. It didn’t close the chapter, but it was nice to talk to them when we were all alone. And now we just don’t talk about that anymore. Nobody really wants to talk about it. We see memories popping up on Facebook and all these other things about, “Oh, we had a softball game last year at this time.” And it’s pretty sad. But no one else is playing. So it’s like we’re all in the same boat. 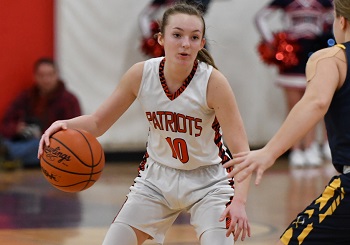 Second Half: You can turn on the news and you can see what every adult has to say about what’s going on right now. … You’re 17, you’re finishing your last year of high school, you’re going through something no one has gone through in more than 100 years. How do you see everything that’s happening in the world right now, as you look at it from a 17-year-old’s point of view and see seasons end and school end?

I know we can’t help what happened. But obviously I think it’s unfair that it happened to our class. It stinks for every grade, but (as seniors) we’re missing out on our best parts of high school right now and it’s pretty horrible. We’ve been waiting years for our senior proms and graduations, banquets and award ceremonies, like the MHSAA one. So that kinda stinks.

Ever since March 12, I’ve been staying optimistic. But I’m proved wrong every time because things just keep getting canceled and canceled. … (But) I’m a pretty optimistic person, so I still have some left.

Second Half: What happens next? What does your summer look like? What happens for people who are in your shoes?

I’ll keep working out, and one of the girls on my high school basketball team is going to play at Michigan Tech so (eventually) we can work out together. … I think the biggest thing to do this summer, that I think I’ll do, is appreciate time with my family. I have gotten to spend a lot of time with them. And then maybe once summer rolls around and we’re allowed to be in bigger groups, I’ll be able to be with people other than my mom and dad, like my grandparents and cousins and my aunts and uncles. … (My sister Jillian and I) have been playing the same varsity sports for the last couple of years, and she’s been really successful. It’s been fun to win all these championships and stuff with her.

Second Half: What do you think you’re going to remember from this in five years, 10 years, when people ask you what your experience was like?

I’m probably going to say it’s a pretty bad experience. I guess it was an eye-opener that life can change at any moment. That’s kind’ve it. It didn’t change in a good way.

PHOTO: Westwood's Madelyn Koski sets up a play as Negaunee's Breanne Giotto defends her during their Jan. 24 game. (Photo by Cara Kamps.)