BOYNE CITY – There’s a party going on in the student section at Boyne City, and everyone’s invited.

The streets were mostly empty as we rolled into town for Friday’s Battle of the Fans VI visit – freezing temperatures probably had something to do with that, even in the heartiest of ski country. But we found a full parking lot and plenty of bustle as fans poured in for the basketball doubleheader against Kalkaska – and the Rambler Rowdies “Fright Night,” our first stop on this year’s BOTF tour.

The breakdown: The section formerly known as “Bleacher Creatures” had a pretty good tradition of cheering on Boyne City teams over the years, but interest ramped up during the 2014-15 school year when both the football and boys basketball teams advanced to MHSAA Semifinals. Last winter, with the boys basketball team set to face rival East Jordan in a Class C District Final for the third season in a row, the Rambler Rowdies were born to take support to another level. After losing to East Jordan twice during the regular season, Boyne City won 62-33 – and the section’s name, along with its newfound passion, stuck.

On this trip, we met with seniors Tristan Stackus, Emma Vondra and Camella Zipp, and juniors Jake Kelts and Ethan Hewitt. Check out the video, followed by more of what we saw from the Rowdies.

1. They’ve gotten everyone on board

The Rowdies claim to be a true cross-section of the school and its nearly 400 students. In a building that size, students often take part in a wide range of activities, and all are represented. In addition to athletes from other sports, the band is a regular and lined the top rows of bleachers on Friday. And while Stackus, Vondra, Kelts and Hewitt all play at least one sport – Hewitt actually plays on the basketball team – Zipp spends her time in the arts, but is just as "rowdy." The togetherness is personified when the student section enters games as one, instead of trickling into gym as individuals show up. “We’re including more people in it. Our band’s getting more involved. We have kids coming from drama that will get involved because they really like acting everything out. … (and) I feel like especially when we enter as one, it makes us more united,” Zipp said. “We’re all the same. I don’t think of myself as a drama person, or even as the basketball jock.” The section this season began choosing themes for the first time, and all have a voice; Stackus, who administers the @Rambler_Rowdy Twitter feed, gets ideas from classmates on Mondays, posts a Twitter poll so all may vote and then announces via Twitter the winner.

The theme for Tuesday's game against Charlevoix will be red and blue! Wear your Rambler gear and be ready to be rowdy! #boynetough

And here’s a spin on seniority we hadn’t heard before: The Rowdies don’t do the “seniors in front and everyone else in back thing,” which in itself isn’t that rare among our annual BOTF finalists. But the Rowdies differ in that they put freshmen near the front so they can’t hide and not cheer, filling behind them with upperclassmen to make for a stronger section front to back. In fact, Kelts led the section two years ago as a freshman – which does qualify as a rarity and no doubt has helped develop this attitude toward mixing up the classes.

The Rowdies are selling the Boyne City brand in the hallways, and clearly it’s taken hold. The business plan started in the high school’s marketing class, taught by Tony Cutler, who has served as the architect helping student leaders get the section rolling. The buy-in has been wide-ranging, with plenty of helpers chipping in – keep an eye out in the video for all of the Rambler Rowdy/MHSAA co-branded banners advertising “Friday Night,” plus the other staging created for the event like the cemetery fence and the “R.I.P. Bad Sportsmanship” gravestones put together by additional students who put in outside time to be a part. The message also is taking root in the community – with Cutler’s help, section leaders have made connections that have resulted in local donations of everything from cowbells to head bands to spirit towels.

3. They own the airwaves

This goes with the marketing and branding discussion above, but carries enough clout to have its own point here. The Rowdies make full use of an in-school television station – the Rambler Sports Network – that rivals any in our state, regardless of size of school, with production done by students in the Visual Imaging class (known in the halls as BCVI). TVs all over campus showed eye-catching promos for Friday’s BOTF visit and gave it extra oomph. Students filmed and produced Friday’s game, and their work is now included on broadcasts by local MI News 26.

Kelts was quick to note the school has won 10 sportsmanship awards over the years, and doing the right thing in the stands is not just talk. In fact, we didn’t hear a negative word coming from the Rowdies the entire night. They focused on cheering their team and having fun. It was that simple, but from our point of view the 100-percent positivity certainly was noticeable. 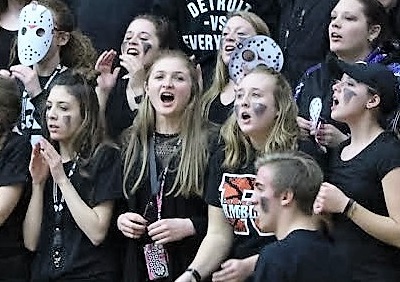 5. They’re filling the night with fun

The Rowdies packed a lot into “Fright Night” starting with all of the themed decorations and Kelts’ take on Jason Voorhees (from the “Friday the 13th” movies) leading a section full of classmates in black from head to toe. They entered the “Wheelhouse” – their gym – together in something out of a horror movie, sprinting in from multiple directions in advance of Kelts and his chain saw (only a toy, of course). We’ve heard most chants over five years and 25 BOTF visits, but the Rowdies had a few we hadn’t heard before. And the halftime surfing by Kelts – propelled by classmates on the floor on a surfboard covered in what had to be a case of duct tape – traveled half the court and was a highlight of the night.

Players love it: “That Grayling game (a 49-44 win Dec. 13), we were down, and I hit a 3 to go ahead and the student section just erupted,” Hewitt said. “After that, not only are you playing for yourself, but you’re playing for everyone else. … The environment in the gym is totally different.”

An Up North thing: “We’re all small towns and we’re all really close together, and we are rivals with a lot of these close towns,” Vondra said. “But since we’re so small, everybody knows about everything that’s going on. So whenever you get news about something that’s happening in the school or the community, everybody automatically knows, and then they’re just that much more into it.”

Next stop on BOTF: Next up is reigning champion Traverse City West for its boys basketball game Friday, followed by visits to Charlotte (Jan. 28), Petoskey (Feb. 1) and Frankenmuth (Feb. 3).