A standard for Michigan’s high school student cheering sections has been set over nine years of Battle of the Fans.

Carter Aalfs has been part of it almost from the start. 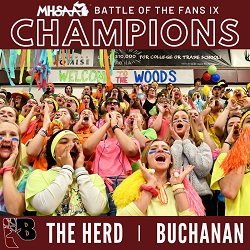 He caught the fever as a fifth grader in 2013, watching an older cousin lead Buchanan’s newly-organized “Herd” to the BOTF II championship. Two years later, now in seventh grade, he stopped into the MHSAA’s finalists interview session with high school leaders to tell us how he already was becoming part of the growing tradition as a member of the younger students’ “Junior Herd.”

He was in the stands for Buchanan’s second BOTF championship in 2018. And this year, as a senior, he was one of the leaders directing from up front, showing his classmates the way to the Battle of the Fans IX championship – a victory that made Buchanan the first three-time winner in BOTF history.

"We've established a place where you can be yourself. You can be outgoing. You can have fun. And you don't have to worry about anybody judging you," Aalfs said. "Many people don't get to have an experience like this where you get to be with all your friends, all having a good time, while also supporting your school.

"Everybody is going to go crazy. Everybody is going to be so excited about it. Just because of all the hard work we put in during the whole season, all the way back into football season. All the preparation it took, the long meetings, and just making it all come together."

Buchanan will accept its Battle of the Fans IX championship banner during halftime of the first Division 2 Boys Basketball Semifinal on March 27 at Michigan State University’s Breslin Center. Finalists Saginaw Heritage and Zeeland East also have been invited to Breslin to be honored for this season’s achievement.

Buchanan was chosen based on a vote by the MHSAA’s 16-member Student Advisory Council influenced by public vote on the MHSAA’s Facebook, Twitter and Instagram sites. A total of 10,086 social media votes were received – the first time the total has reached 10,000 – with those results then equated against a school’s enrollment. This year’s results came out to 3.5 votes cast for every student attending one of our finalist schools.

Buchanan totaled the most public social media support. Combined, the three finalists received more than 10,000 RTs, Shares and Likes on social media since Tuesday, including 6,500 on Instagram.

Other numbers to consider from this season's contest: The application videos have been watched nearly 13,000 times, and the MHSAA-produced videos from our finalist tour stops have almost 2,000 views. The stories detailing the three tour stops plus Tuesday’s explanation of how to vote and the announcements of semifinalists and finalists had been viewed more than 6,000 times as of 8:30 this morning. The three Instagram stories covering our visits were viewed nearly 6,400 times combined.

Below are our final takeaways from this year’s finalist trips:

What we saw: The Hawk Nest has come so far so fast over the last two years, from pretty much nothing to two-time BOTF finalist. Visiting for the second year in a row, we were surprised at first to learn the foundation of the section had changed from being rooted in the school’s Leadership class to being completely student organized and directed. At the same time, students taking the reins is a section evolution we’ve heard about or seen for ourselves over the last decade of BOTF, and there was little doubt the Nest this year was taking its cues from student leaders including representatives from three grades. The Nest showed off another nice turnout for our basketball game visit considering the highly-ranked hockey team also was playing on the same night. Students who did attend this boys basketball game were invested in the action and cheered throughout. We also enjoyed how a wide variety seemed to have roles during our visit, from conducting the “light show” during pregame warmups to taking part in various cheers and a halftime relay competition.

Why we’re fans: We have a lot of respect for student initiative, and we appreciate the Nest owning not only the opportunities to have fun but also the importance of self-policing to make sure everyone is enjoying themselves in appropriate and sportsmanlike ways. They showed us some fun ideas and were up to try new things, and there was a strong feeling from that multi-class leadership that this section won’t drift away any time soon. We also appreciated how they take the show to the football field and ice rink, and do so in force. The enthusiasm was overflowing, and we could feel it.

Be the Change Award: Zeeland East

What we saw: Two hours of creativity and originality poured into genuine support for the players on the floor. The Valentine’s Day theme was pulled off to a T, and we’re sure all involved on this Senior Night felt the love – including mothers in the crowd supporting both the Chix and opponent Hamilton who received roses during halftime. The involvement of the school’s Ottawa County Sheriff’s deputy in leading a wild cruiser ride was memorable, and the middle school breakdancer unforgettable. We like to dissuade sections from playing with potentially messy confetti or glitter, but the blast of pink and silver into the air over The Coop looked pretty awesome. Coop Crazies say it’s all about the party – and we felt like they were throwing the biggest bash in town.

Why we’re fans: A lot of student sections say, “This is our year. We’re going to change some things.” Coop leaders actually had the courage and put in the work to do it. Underwhelmed by their student section experience the last three years, a group of seniors took over and quickly rewrote the script. The question moving forward is how the next group of leaders will mold the section – but if they can keep the creativity and party atmosphere going, this will be a section to contend with for years to come.

Battle of the Fans champion: Buchanan

What we saw: There’s a line here between not saying enough about this year’s Herd and having already said it all, and we’re straddling it because we’ve had an opportunity to see Buchanan in action a number of times over the years. But as we stated in our original report last week, something did catch our attention – from the front row to the back and across the section through the Junior Herd youngsters who joined in, everyone was all in all the time during our Tuesday night visit, and without special rallying cries needed to keep it up. The Herd, standing together, was naturally cohesive and fun, which comes with really wanting to be there and be a part. The section was loud from start to finish, every possession and every break, and always engaged in the action. But there’s more to it. 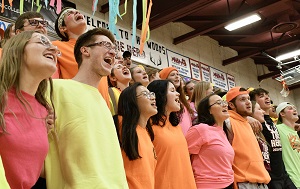 Why we’re fans: The first time we visited Buchanan, in 2013, the takeaway was a new student cheering section had changed school culture dramatically over just a few short months. Now that culture is ingrained in every grade from elementary school up. People have asked over the years if this Herd lifestyle is real or just a show – and we’re here to tell you, it’s absolutely authentic.

The Herd experience sends outgoing seniors into tears and brings past leaders back to watch those who have followed them. It has now linked nearly a decade’s worth of students – and continues to set an example any school would be wise to follow.

And Buchanan is glad to be that example. Over the years, Herd leaders have been sought out by other student sections across the state, and even some from other states, asking for advice on how to do something similar at their schools.

Aalfs and his classmates are glad to show anyone the ropes, that those schools too might enjoy some of what he and his friends have grown up with and grown to love about their high school experience.

"It's going to leave me with such great memories that I'm going to remember for the rest of my life," Aalfs said. "Just being around everybody, everybody being so positive. It's crazy."

Check out below our stories and videos behind the finalists. Also, click to see student-produced videos from all sections that entered the contest. (Photos courtesy of Buchanan High School.)

Read all about it: Have You Herd? Buchanan Tradition Lives On

Read all about it: Heritage's Hawk Nest Taking Charge

Read all about it: Zeeland East's Coop Crazies Share the Love