An annual power boasting two title banners, another return finalist that impressed for the first time a year ago, and one of the earliest contenders in contest history have earned opportunities to vie for the MHSAA's “Battle of the Fans IX” championship recognizing the top high school student cheering section in Michigan, as awarded by the MHSAA’s Student Advisory Council.

Buchanan, Saginaw Heritage and Zeeland East were selected as finalists by the Advisory Council from a group of nine semifinalists that took part in a series of social media challenges highlighting their sections over the last two weeks.

Members of the MHSAA staff will visit all three finalists over the next three weeks, producing articles about each section and videos of those sections in action, all to be published on Second Half.

The winner will be selected by another vote by the 16-member Advisory Council, with consideration given to a public vote on the MHSAA’s social media sites. This year’s winner will be announced Feb. 21 and recognized March 27 at the Breslin Center.

Buchanan and Heritage were finalists a year ago. Buchanan is seeking its third BOTF championship to go with those won in 2013 and 2018 and also made the finals in 2014 and 2015. Heritage was a first-time finalist last year, and Zeeland East was a finalist for Battle of the Fans II in 2013.

The MHSAA will visit the finalists for the following home boys basketball games:

Reese and Traverse City West tied for fourth in this round of voting, just missing claiming the third finalist spot. Caro, Frankenmuth, Hart and Petersburg Summerfield also were semifinalists.

“Some real heavyweights are in the final three this year,” said Andy Frushour, MHSAA director of brand management and advisor to the Student Advisory Council.

“Buchanan has been a finalist in six of the last seven years for good reason – The Herd is a genuine part of the school and community culture. Heritage is in the finals for the second straight year after coming up just short of getting the banner in 2019. Zeeland East is a finalist for the first time since 2013, but the west side of the state is known for having great student and community support at games. The Chix think this might be their year.”

The Herd is loud and proud for #BlackoutNight in #TheWoods! Go Lady Bucks! ?????? #BOTF pic.twitter.com/KUcwDFyw1q 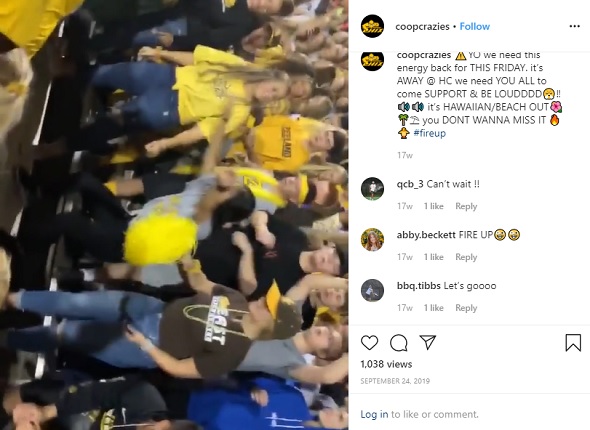 Battle of the Fans is organized by MHSAA staff and the Student Advisory Council. Schools were invited throughout the fall to submit short videos, via YouTube, of their cheering sections in action. The Advisory Council then selected nine semifinalists to accomplish a list of tasks showing off their sections over a 12-day span.

Semifinalists were required to complete 10 challenges via their social media channels. Five mandatory challenges focused on contest criteria: positive sportsmanship, student body participation, school spirit, originality of cheers, organization of the group, student section leadership and overall fun. Semifinalists then selected five elective challenges (taken from a list of 15 opportunities). Descriptions of all 20 challenges are available on the MHSAA Website.

A total of 20 schools applied for this year’s contest – including nine first-time applicants. Three semifinalists each were selected from the Class A, Class B and Class C/D applicants. See below for a playlist of all 20 applicants.

The contest is sponsored in part by the United Dairy Industry of Michigan, which promotes Michigan's locally-produced dairy products and nutrition education. Rules plus links to past years’ coverage of the contest can be found on the MHSAA's BOTF site.

The Student Advisory Council is made up of eight seniors and eight juniors who each serve two-year terms. The Council acts as the voice of Michigan's student-athletes; it serves as a student sounding board for the MHSAA's Representative Council, assists in planning Sportsmanship Summits, Captains Clinics and other student leadership events; participates in a yearly focus group about the state of high school sports for Michigan State University's Institute for the Study of Youth Sports and assists with medal ceremonies at MHSAA championship events.