CHARLOTTE – The time was right last winter. Charlotte’s student body was ready to take flight. All it needed were leaders to show the way.

And a few snow days to prepare for lift off.

The beginnings of the school’s student cheering section were that humble. But the community also was that ready. Over just more than a year, Charlotte’s “Flight Club” has risen from nonexistent to a finalist for this year’s MHSAA “Battle of the Fans,” and while helping to re-igniting the community’s fervor for its sports teams.

An “ugly green poster,” a snow day meeting and some savvy marketing transformed a group of 20 students into a section of hundreds that holds down a corner of bleachers at basketball games, has brought back student involvement at football games and last week took a spirit bus to the competitive cheer team’s league meet while others stayed home to back the wrestlers in their District Tournament.

“Our school is just the right size where it’s like 800 best friends,” senior Bryce Johnson said. “All the people watching the games know the athletes, so you’re going for friends, not because of a sport.”

Charlotte was the final stop on this year’s BOTF finalists tour, which also has included visits to Yale, Muskegon Western Michigan Christian, Traverse City West and Munising. The public may vote for its favorite on the MHSAA’s Facebook, Twitter and Instagram sites beginning Tuesday and ending Thursday afternoon, with the MHSAA Student Advisory Council taking that vote into consideration when selecting the champion – which will be named Feb. 19 on Second Half.

The formation of Flight Club got a nudge from current math teacher and boys basketball coach Tyler Bartolacci played for the Orioles and graduated from the school in 2007.

Carlson and senior Anna Skrip were students of his last year, when Bartolacci began to hint at the start of basketball season that it would be nice to see more of a student presence in Charlotte’s gym.

Slowly, things started to take off. Carrying what Skrip called “an ugly green poster that said ‘Pep Club’ on it,” seniors spent a lunch hour last winter gathering names of students who were interested in creating a student section. It was a pretty simple start.

The next step came in mid-January during a series of snow days. Five of those now-graduated seniors, plus senior Lindsey Carlson and Skrip, answered a group text and showed up at the school on one of the days off and started hatching what the section might look like. They had a list of goals – chiefly figuring out how to get students to show up, how to get them to be “loud and crazy,” and how to do it all while maintaining sportsmanship. 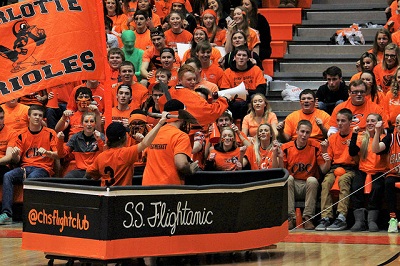 They decided the first task would be naming the section. They collected 75 nominations from the student body, and an all-school vote made Flight Club the clear choice.

They then circled a Jan. 27 boys basketball game against Parma Western as the official kick off, and were happy with the turnout during a 51-48 win. But Johnson – who was on the basketball team last season – said the Feb. 27 game at Coldwater, attended by about 45 Charlotte students, showed the Flight Club’s potential. “They were with us the whole game, every big play, turnover; it was just insane,” Johnson said. “That’s when people were like, we’re actually quite good at this.”

The boys basketball team ended up making a run to the Regional Finals, hosting that tournament on its home floor. The Orioles lost to eventual Class B champion Wyoming Godwin Heights – but the Flight Club had arrived.

“It wasn’t too hard. You told your close friends, and friends would tell other friends, and the word would spread,” Skrip said. “Getting people to participate at the game was really the hardest. And then … they found out that it was actually fun to do things.”

The fever caught, and not just in the hallways. Over the last year, Charlotte has added a new overhead scoreboard and another section of bleachers to “The Dome” at the cost of a reported $55,000 raised by the community.

“People in the community are still here who witnessed the (school’s) greatness of the (19)80s, 90s. And (now that) we’re finally getting back to that point, the whole community is rallying,” Johnson said. “Every game now, if you drive down the main stretch of downtown, all the orange flags are up in the buildings.”

The momentum of last winter carried over into this fall. The varsity football team finished only 2-7, but senior Tyler Bandy said he could feel the difference from his classmates in the stands, even when his team was behind.

Still, the section leaders – “flight attendants” – came into this winter wondering if interest would remain strong. This time they planned to go big immediately with the boys team’s first home game Dec. 11 against Jackson Lumen Christi. Charlotte won 75-52 – and the place was packed.

“We didn’t know what to expect because of our history going against Lumen. They beat us at everything,” Carlson said. “It was amazing to see people just keep coming in. People were standing around because there weren’t enough seats. It definitely helped our team push past them, and we just dominated.” 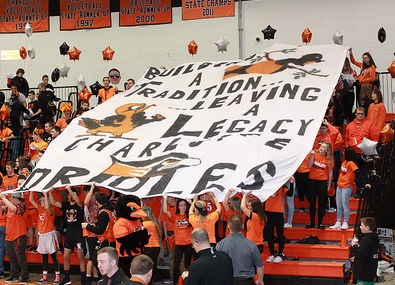 The halls were alive the next Monday. Johnson heard classmates talking about how they were going to attend every game this season, how they’d had so much fun. Although Carlson, Bandy, Johnson, Skrip and junior Jess Ramos are among those considered leaders because they lead the cheers on game nights, they’ve received plenty of input – and assistance – from other students, including 25 who spent Thursday evening decorating the school in advance of the BOTF visit.

“We kinda became a marketing team,” Johnson said of the last year’s work.

“We’re going to start a business,” Carlson added. “How to amp up your student section.”

Part of the process has been continuing education, like “Flight School” videos the leaders put out over the last few weeks to keep classmates organized and fill them in on plans for upcoming games.

The camaraderie has allowed for special moments as well. For a Feb. 2 game against Mason, Flight Club leaders saw that the Bulldogs student section would be having a “Storm Out” for junior Storm Miller, who is fighting a rare form of cancer. Without letting it be known outside of the section, the Flight Club came together and wore blue that night – in honor of Miller – and passed buckets around at halftime to collect money for a GoFundMe account that assists in paying for treatments.

Battle of the Fans has become another of those special experiences. The flight attendants had no idea about it until Bartolacci introduced the idea to Bandy during the fall. Carlson’s immediate thought was this was something the Flight Club had become – and the time was now to get out the good word. It’s been a logical next step for an effort that has taken off more than she and her classmates could’ve ever hoped.

“Last year, we knew we loved our sports, and they’re getting really good,” Carlson said. “Our participation wasn’t as big, so (we thought) let’s amp up our student section, support our teams – get them better, get us better.”