TRAVERSE CITY – Being a member of Traverse City West’s “Bleacher Creatures” means joining 200 classmates at a District soccer game, when the other side brought 20, and then willing the team to an overtime win.

It’s being part of 100 students traveling hour to an opponent’s football Homecoming game – and then working to out-cheer the larger home crowd.

But it’s also uniting with 1,000 students by wearing blue one school day to raise money – a dollar for everyone wearing that color – for the Red Cross after the Paris terror attacks. And it’s taking part in what’s going on in the classroom and the hallway.

Summed up, it’s engaging in a school community that leaders proudly call tight-knit despite being made up of more than 1,600 students.

“It’s just become so deeply-rooted in who we are and what we do. It’s a culture within our school,” senior Cooper Kirby said. “Being a Bleacher Creature and getting involved and doing these things makes kids enjoy school more. I love going to school because I love being a Creature. … It’s a really big part of who I am and so many parts of our students – really a part of their character to care about each other and care about what we do and care about supporting our teams.

“And I’m not exaggerating, either.”

Traverse City West was the third stop on this year’s BOTF finalists tour, which also has included visits to Yale, Muskegon Western Michigan Christian and Munising and will finish with a trip to Charlotte on Friday. (Watch for the Munising report and video Wednesday and Charlotte’s on Feb. 15.) The public may vote for its favorite on the MHSAA’s Facebook, Twitter and Instagram sites beginning Feb. 16, with the MHSAA Student Advisory Council taking that vote into consideration when selecting the champion – which will be named Feb. 19 on Second Half.

West’s Bleacher Creatures were finalists as well in 2014 and fall under the direction of the school’s student senate. Kirby, this school year’s governor, is part of the Bucket Brigade, the group of 4-6 section leaders named for the buckets they pound during football games. Like previous leaders, he too is able to rattle off names from Bleacher Creature history, like 2008 governor and section founder Chase O’Black. 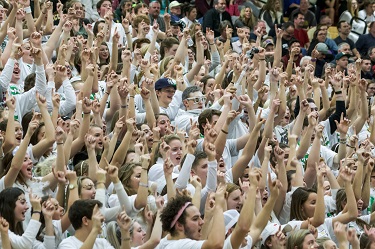 The student section’s leadership structure has remained much the same. Senators are elected by student vote, and in turn make up the heart of the student section and are charged with gathering as many participants as possible. But last year taught this year’s leaders a few lessons about taking action – and not taking a good thing for granted.

After two years of what they considered amazing sections, this year’s leaders felt a letdown in 2014-15. Some of it made sense – West provides many opportunities for student involvement, and students are invested in other things. But it also felt like spirit, and the Creatures’ efforts, were dwindling.

“My freshman year was amazing; I have so many great memories from sections,” said junior Dani Priest, a senate member. “Last year, it was, ‘Oh, this is fun. But we can do better.’ I think that almost motivated us for this year, especially (our) seniors.”

“I just wanted to make it the best senior year we absolutely could make it,” added Alex Tokie, also a senate member. “Making student sections absolutely insane and (having) absolutely the best sports programs we could make was just going to make my senior year that much better.”

At the first senate meeting of this school year, the group made invigorating school spirit a top goal. They got back to work creating new chants with ideas from the cheerleaders and assistance from the drum corps that during Thursday’s visit provided the soundtrack to the near-constant buzz of 400 students loaded in a section of bleachers at midcourt. The Creatures picked up a chant from a pair of exchange students from the Netherlands and upped their costume game with themes not seen elsewhere, dressing up like dads, chefs and Harry Potter. They also began selecting “Creatures of the Week” who are awarded couch seats in the front row based on their participation.

Senior Ryan Murray transferred to West in fall 2014 and bought in big-time to school spirit – this fall he was either playing soccer or watching volleyball five nights a week – but he still can’t quite believe how last year’s “mundane” student section has bounced back.

“There are kids passionate about it. To get 250 kids to show up to a game against Petoskey and have every single kid be excited to be there, to be crazy loud, to be dressed up – part of their persona is being there and being in their costumes and things like that,” Murray said. “It’s awesome.” 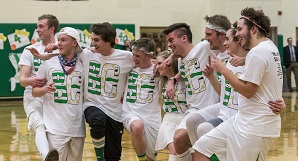 Communicating events and themes has always been a section strength. One of the lessons of last year is one that can apply at any school – the importance of leadership in giving action to the message. In West’s case, Kirby and his executive board are the start. Those five students then get the other senate seniors excited, and those seniors in turn pass on the energy to their friends, who pass it on to more. Soon, an entire school is following suit.

And in West’s case, that continues to mean cultivating a culture that has students wanting to be involved, creating memories and carrying on a legacy.

“(Bleacher Creatures) are people who like to go to things, who enjoy high school and enjoy what they’re doing.”

PHOTOS: (Top) The Bleacher Creatures, 400 strong, stand together during Thursday's boys basketball game against Traverse City Central. (Middle) The Creatures follow their leaders in a chant. (Below) Leaders of the section pose after a halftime dance at center court. (Photos courtesy of Rick Sack.)