But let’s not confuse different with new. Buchanan has built one of the state’s richest student section traditions, and with the accolades to back it up – Battle of the Fans championships in 2013 and 2018 and four other finals finishes.

There’s no forgetting The Herd’s past. And why would anyone want to try?

Section leaders going back nearly a decade are recalled as famously as any recent star athlete. Current section leaders readily recall when they, as elementary students, learned Herd staple cheers like “Geronimo” from those past all-stars during visits – traveling pep rallies – to their elementary and middle schools.

Photos from years past adorn classroom walls, stoking memories and new ideas. And past Herd campaigns like “Mean Stinks” and “Don’t be a Bully” provide memories of growing up in a school and community that has become known as a standard-setter for student section support – and added to the legacy with another BOTF finalist tour visit Tuesday for its boys basketball game against Watervliet.

“We've been doing this for so long. It's just like an expectation,” Buchanan junior Mia Struss said. “It's what we do. It's what Buchanan does. Everybody comes together on Friday nights. Or like this (visit) happened on a Tuesday – we know we're going to have fun, so we're just like ‘Come out’ or ‘Are you guys going to the game? Oh yeah! Absolutely, we're going to the game.’  Everybody just comes together and has a fun time because it's what we do. It's what we're used to doing.”

There’s a well-worn path from the MHSAA’s East Lansing office to Buchanan during Battle of the Fans season.

As noted above, this was our sixth visit in nine years of BOTF, and current seniors were in fifth grade the first time we made the trip. We know how the section got started, we readily can recall leaders we’ve met in the past and cheers that pop immediately into our heads when we even think about coming back to see The Herd.

But instead of relying on that knowledge, we approached Tuesday like we’d never been to Buchanan before. We asked the assembled leaders – seniors Carter Aalfs, Nora Kaltenbach, Jade Smith, Rose Johnson and Bobby Ruth and juniors Ty Scurlock and Mia and her twin sister Morgan Struss – the questions we always ask. How did this get started? What has this meant to your school? Why did you get involved?

Their answers could’ve been word for word what Herd leaders told us in 2013 or 2018 or during any other trip. The conversation just reinforced how ingrained the cheering section has all the way down to the elementary students dreaming of joining in when they are older.

As they joked – but maybe not? – The Herd is a lifestyle.

This is how they live.

Buchanan had to deal with a bit of a curveball this BOTF season. Originally, the Herd was going to host the MHSAA on Friday, Jan. 31. But a school-wide illness knocked out the Bucks’ opponent for that night, and the only feasible make-up for the BOTF visit was a Tuesday – generally the lesser-anticipated night for a big crowd compared to a Friday anywhere in the state.

But the move to a Tuesday only seemed to psych The Herd up more.

“It’s a challenge. But we’ve taken it and made it into something that’s normal,” Morgan Struss said.

Leaders have an eight-year library of cheers, chants, dances and more to draw from, to go with ideas they’ve cooked up for this school year.

Leaders made sure to tell us this year they have added four new dances to the repertoire. And those were folded nicely into a night of what we’ve come to expect from near-annual trips to “The Woods.”

“We love to keep stuff, but we always like to think outside the box, get new things in and keep some of the old things,” Aalfs said. “And sometimes we'll bring back other things that we've taken out. It’s kinda like a cycle.”

Considering again this was a Tuesday night, the stands were filled – not just the student section, but both sides of the court – which makes sense with the perspective that a school with just more than 400 9th-12th grade students sold 1,200 Herd T-shirts this year to fund the section, provide for local families in need and fund scholarships.

“Neon Night” predictably was a hit, not just with the nearly 200 high schoolers filling their set of bleachers, but also the 30 or more middle school and younger students who formed a “Junior Herd” next to them.

Following a lights-out introduction of the home team, there were cheers for individual players and some kind of activity during every timeout and quarter break until the end of a 22-point win. Halftime included a senior class dance and a five-minute mashup of signing and grooving. Another new addition came at the end of the game, when students formed a long tunnel for the team to leave the court – and then joined together at midcourt one more time for The Herd’s signature “B-U-C-K-S Bucks!” chant.

Back to every year being “different.” Leaders had a tough time putting it into words at first before settling on “effortless” to describe the enthusiasm and cohesiveness of this year’s Herd. And frankly, we could tell the difference too as every student in the stands from front to top seemed engaged and having fun from warmups through the final buzzer. 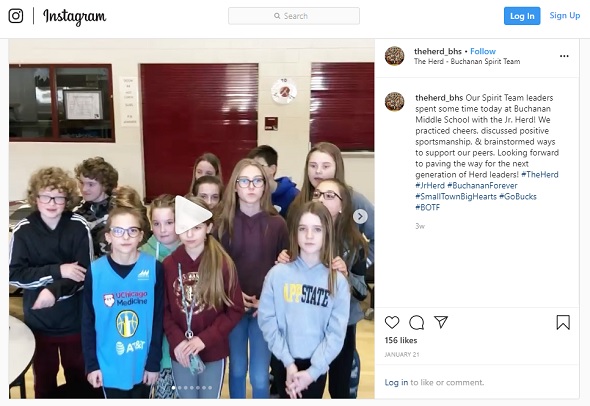 Take some of these tips from The Herd:

Find a teacher, find a friend: The Herd absolutely benefits from that trio of teachers – “shepherds” – who are dedicated to giving their time and whatever else the section needs. That, and administrative support, go a long way in helping a section get started and need to be cultivated. At the same time, it doesn’t take a lot of student power to get something going. Find a friend, or a few, tell other students you have a plan for the game coming up and just show up and do your thing. Do that once or a few times, and something is bound to take root and grow.

Open the gates: Herd leaders want anyone and everyone from all grades, friend groups, teams and clubs, etc., to be involved – and that’s part of its allure. Tuesday’s visit included something of a welcome with “MHSAA” painted on students’ backs, and one of the students had been at the school all of a week – but already had been pulled into a section meeting and Herd Snapchat. “Everybody's accepted at Buchanan, and we don't exclude anybody,” Ruth said. “It feels so nice to have everybody around. The more people, the more energy and spirit that I feel when we're having meetings and games and everything.”

Embrace trial and error. Because it’s fun: Not every chant or cheer or song is going to work. And that’s fine. Most great discoveries come after the first try. As long as ideas are reasonable, try them out. It’s a great way to find a section identity, and also to keep people engaged in coming up with ideas to help build it.

Make a plan: Once you’ve got a few ideas for theme nights, or a few cheers that have worked and taken hold, make a plan for game night – especially big ones where you’re hoping to get a lot of students to join in. That way you’re not left trying to figure out what’s next on the fly, and your classmates will get hooked on being part of something organized and well-led.

Embrace the opportunity: “Come in with an open mind,” Smith said. “Don't be like, ‘That's lame. I'm too cool for that.’ What's the worst that will happen? People will laugh. Laugh with them. In the end you're actually enjoying yourself – you're having more fun than those people judging you.” 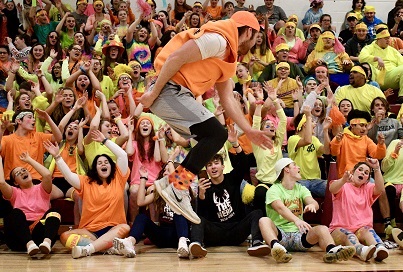 Trust me: “I always viewed (The Herd) as an icon, like what people go to see, and I never viewed it as something to do,” Scurlock said. “I always went there to watch them, or I was playing basketball. This year it was different. Last year I was behind them in the stands, going with them, but I wasn't consistent with it. Now that I’m in it, I wish I did it before. I regret it a lot. … I’ll ask my friends if they want to do this or that (with The Herd), and they’ll say they, ‘Nah, I don’t want to do that.’ I say, ‘Trust me, you do. You just don’t realize it.’”

Great expectations: “I started two years ago, and just looking at the class that had graduated that year (in 2018), that had started everything, that class was full of a lot of my friends and I felt very inspired looking at them,” Ruth said. “So I felt like this year, I really had to own up to that and say, ‘Hey, listen.’ I need to do what they did.”

They’ve got next: “When we go into traveling pep rallies, we're like, ‘Hey, this is going to be you someday. You're going to have to fill our shoes eventually.’ We're just trying to prepare them as much as possible so it will be a fun time for them.” Johnson said of the younger students coming up. “Whenever we say a chant, like ‘Do you know this chant?’ They're like yeah, and they start doing it. So it's just exciting. They just know us and know all the chants and what we do.”

Next stop on BOTF: We will finish the 2020 BOTF tour at Zeeland East with tonight’s boys basketball game against Hamilton. Our coverage of that trip will be posted to Second Half on Monday, and social media voting will begin Tuesday and continue through Thursday. The Battle of the Fans IX champion will be announced Feb. 21.