SAGINAW – Braeden Dinninger was so stoked before Friday’s Saginaw Heritage boys basketball game against Midland Dow, it felt like he might bounce right out of his neon green headband and hot pink arm sleeve.

A year ago, Heritage’s Hawk Nest became a bona fide all-star student section, even reaching the MHSAA’s Battle of the Fans VIII finals. A year later, Dinninger is a product of what he and his classmates have created on the way back to the championship round for BOTF IX.

“The environment – it's electrifying when you're in there,” said Dinninger, a senior football player and track sprinter who was elected a Nest leader this winter. “Everyone's talking, having a good time. So it's a time when you can come in, cheer, see your friends – talk to people you don't know, meet new friends – and it's an experience that we want people to come out and get more.”

We received our share of that electricity during the MHSAA’s BOTF visit Friday, the first on this year’s finalists tour that will include stops in Buchanan on Tuesday and Zeeland East on Friday.

At Heritage, we met with Dinninger, juniors Sophia Spradlin and Nikki Ambas and sophomore Charlie Davis to find out how the Hawk Nest had changed things up and taken another step this school year.

Two years ago, there was nothing like this. A year ago, thanks to the leadership of a dedicated teacher who made the student section part of her curriculum for the school’s Leadership class, the Hawk Nest was born.

The Hawks received a BOTF finalist banner last March on the floor at Breslin Center, and on the way home then-sophomore Sophia Spradlin brainstormed ways for the section to make a run at the championship this time.

She’s now one of the leaders of the “Battle of the Fans Club” – borne out of but separate from the school’s Leadership class – as the Hawk Next this winter has become fully student-organized and directed.

“We liked the student section how it was, but I feel like a lot of people could agree that it just wasn’t where it could be,” Spradlin said.

Dinninger added: “We wanted to take that step and also include more things that we thought could be fun, not just what we did last year.”

They’re the Hawks of Saginaw. If you don’t get that by the time you leave a Saginaw Heritage game, you just haven’t been listening.

Over eight years of Battle of the Fans tour stops, some cheers simply have stuck in our heads. Heritage’s “We’re the Hawks of Saginaw” is one of them – “We do it ... any time in the game. It’s just a blast,” Davis said.

Also recognizable from our 2019 visit was a baseline bleachers filled with students in some mix of neon, mostly green again this time with a side of tie dye. But there were many more new features on the Hawk Nest playlist

Before every home game, a different pair of students enjoys the responsibility of providing the “light show” during pregame introductions – which is more or less a pair of flashlights racing around the domed arena, with parents and other fans along the sidelines using their cell phones to add to the mystique. Simple perhaps, but proof it doesn’t take much to add a touch of coolness to something otherwise ordinary at most places.

Introductions end with a Heritage player firing an imaginary arrow into the stands, sending the section falling backward. This is actually a common theme – the Hawks look for any number of opportunities to topple over, including leaders throwing a classmate into the stands like an airborne bowling ball.

What follows is a lot of chants, a lot of “We’re the Hawks of Saginaw” and generally just a lot of fun.

The Nest always has some interactive activity set up for halftime, and this time it was a relay race that included hula hoops and 3-point shots. It took a little while to set up, and to be honest was pretty tough to follow – but who cares? It got a bunch of students moving around, yelling and laughing instead of sitting with their heads in their hands until the game got rolling again.

Like at most places, basketball is the big show during winters at Heritage – and here it’s following the girls team, winners of two straight Class A/Division 1 championships. But the section also follows the boys hoops team, the highly-ranked hockey team and has come together for swim meets, volleyball matches and the Heritage-hosted pompon regional. (See the Challenge Round video below showing the section cheering on a variety of teams.)

“The big thing,” Spradlin said, “is we’re so excited for every single game.”

Take some of these tips from the Hawk Nest:

Take ownership: As noted above, Heritage students made a point of taking the baton by becoming the directors of their section this season, and almost everything they do is rooted in that sense they're working on something that belongs to them. That adds a level of meaningfulness. The Battle of the Fans Club meets at least once a week and often more, with about 30 students at many meetings – and Spradlin said every meeting sees someone new show up. Each grade is represented by elected representatives who are counted on to be part of setup and takedown on game nights. All of that leads to that feeling of ownership – and the pride that goes along with it.

Spread the wealth: Heritage has roughly 1,500 students, and while not all of them participate in the Nest, it’s still common – as Dinninger mentioned above – to see classmates in the stands he’s never met. How do Nest leaders make them all feel welcome? By making sure to include them in as many ways as possible. The Challenge Round allowed the Hawks to include a wide variety of students in the BOTF competition, and activities like the pregame light show and halftime games provide more opportunities to get students from various grades involved.

Set expectations: This goes back to ownership a bit. A handful of Heritage leaders have attended MHSAA Sportsmanship Summits, where they learned chants like “Air ball” and the like just aren’t a cool way to go. That and just having a little bit of empathy – of course it’s awful to be the player people are chanting about – have helped the section set some standards. And working hard to develop a positive reputation makes section leaders work even harder to make sure everyone is taking part in keeping it.

Word of mouth works: It’s always smart for student sections to connect with classmates on social media, with posters and daily announcements and even more one-on-one with class visits and all-school assemblies. But at the end of the day, one of the most effective ways to grow a student section is by word of mouth – one friend tells another, who tells another, and so on. Heritage hasn’t put it into practice yet, but is considering something of a buddy program where an upperclassmen recruits an underclassmen to a game. Similar invites bring a personal touch to recruiting efforts.

Take a chance: “I think the only thing you have to do is be open-minded,” Spradlin said. “I was always kinda nervous to get involved, and I think the biggest step for me was being the Hawk (mascot) last year. I did it a few different times, and even though I wasn’t in the student section, I could be part of it. You have to push past your comfort zone. I met some of my best friends from the student section; through this club I’ve met so many new people. If (students) just knew what comes out of (getting involved), they would be more open to it.” 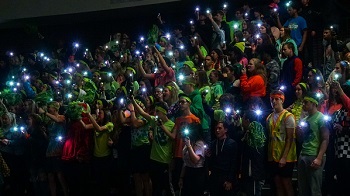 Buzz is contagious: “The best part is when it’s a new school week and we’re just talking about the game,” Davis said. “At lunchtime, it’s ‘Are you going to the game?’ or ‘Can I get a ride to the game?’ or ‘Will I see you at the game?’ It’s so much fun. You talk about it at school, and it really hypes it up when you get here and it just brings all the positive energy to one place.”

Don’t miss out: “I think the next step is trying to get a lot of kids out of their comfort zones, to come out and get that experience,” Dinninger said. “Like me personally, I didn't come out until my junior year to the games, and I totally regret it. I wish I would've come out here my freshman and sophomore year. And there's been plenty of kids who said that: They wish they would've come out to the games and had that experience, because you only get this high school experience four times.”