BUCHANAN – Cailin Gunn was new at Buchanan entering eighth grade, and she was shy. What’s more, eighth graders in her district are housed in the same building as the high schoolers, which understandably could be intimidating.

She went to only one basketball game that season, in 2013-14. But the wall of Bucks cheering on their team easily caught her attention.

And then Jessica Lee, another eighth grader that year, and her friends invited Gunn to join the “Herd” – at that point the reigning Battle of the Fans II champion.

“She was scared, and we all took her in,” Lee said. “Because I know it is scary going to a new school. So the Herd was like, we’re open to everyone. Everybody come join.”

Also an eighth-grader at that time, Kevin Frost was tucked into a top corner of “The Woods” as section leaders whose names remain easy to recall helped Buchanan’s become an example to be followed statewide.

“We just got to see them in action. It was just amazing to watch,” said Frost, who with Lee and Gunn is among current Herd leaders. “I don’t know how to describe it. When we won on a buzzer beater at the ‘Mean Stinks’ game – just to be part of that; it’s come full circle. To be down leading everyone else, it’s indescribable.”

The tradition indeed lives on. The MHSAA’s visit to Buchanan for Friday’s boys basketball game against Berrien Springs was its fourth in seven years of Battle of the Fans and the last of three finalists tour stops for this year’s BOTF VII.

We met with section leaders Gunn, Lee, Frost, fellow seniors Madison Schau and Kenneth Stuckey and junior Garret Lollar to learn more about how they’ve both carried on and added to the Herd’s legacy.

As with our first two finalists tour reports on Petoskey’s Blue Crew and Boyne City’s Rambler Rowdies, below is our review of an evening hanging with the Bucks. Following again the format of a typical game night, we begin with the Herd’s suggestions for other student sections getting started and video from our visit and then tell more of the story behind a group that continues to rock the bleachers.

Take some of these tips from Buchanan’s Herd:

• Be positive – in planning and performance. It all starts with the right attitude, Lollar said, and that starts with the process behind the scenes and carries over to the fun in the stands.

• Make it all about fun. The more fun you’re having, the more tightly-knit your section will become.

• Work together. The Herd has a large group of leaders, but they work to make all of their individual ideas mesh together. That allows them to collect a lot of great ones – and keep everyone in a large group engaged as well.

As an established section for most of this decade, the Herd generally enters a school year with a running start.

Tradition and expectations are set, thanks in part to a group of teachers who are passionate about facilitating whatever the Herd needs to be at its best. But students continue to show as well – it’s the usual this year to have 30 or more at the section’s regular meetings.

The Herd from its beginnings at the start of this decade has been about immersing itself in the community. That’s included a lot of things over the years, including being asked to attend events in town that have little to do with the school’s athletics. But it begins with becoming a fabric of the entire school district, which starts in part with section leaders holding “traveling pep rallies” to teach cheers to elementary and middle school students. (The video below was submitted as part of the BOTF "Challenge Round.")

@MHSAA #BOTF Social Media Challenge #20 YOUTH: How does BHS spread spirit & encourage our Little Bucks? We visit every school in the district with “Traveling Pep Rallies.” We teach them cheers & spread our Buck Pride across all ages! ??♥? pic.twitter.com/w059Bs4qF2

At one traveling pep rally, Gunn and her fifth-grade sister led a cheer together. Another poignant moment unfolded when kids ran up to Lee later on because they recognized her from a pep rally and wanted to show her some of the cheers they’d learned.

“They saw me as a leader, and I like to be a leader,” Lee said. “And I think that’s another thing I like about the Herd: I see myself in them. I was you once, and now I’m … the people who led it before.”

For this year’s application video, the Herd rallied its classmates during the final days before holiday break to shoot a lip dub. Leaders went that route because they wanted to offer something that hadn’t been done as part of BOTF before – but also, the lip dub allowed them to show off more than just a basketball game night. The run through the school’s hallways included appearances by a number of sports teams, school clubs and social groups that all have some ownership in the section.

Herd leaders have an inside joke that while the section has always been good, it went through some “dark ages” before experiencing a “renaissance” this year. This BOTF candidacy is topping things off.

“I feel like this has been our entire high school (career),” Schau said. “We’ve been part of the Herd since we got into the high school. … It’s something we’ve always done, all the way through. So our passion’s really strong this year.”

“Tonight for sure, you’re going to see some bad dancing,” Stuckey said. “I’m one of them, but we’re going to let it all out.”

The Woods are alive from before tip-off until long after the final buzzer. There are plenty of traditions – the speaker system pipes in music during quarter breaks and halftimes for a full section dance party, and during play the cheers and chants are ones the Herd has made regulars over the years – and taught to all of those younger students coming up so they’re ready to step in as high schoolers.

Community indeed runs deep. On this night, Buchanan’s 1977-78 Class C champion boys basketball team was featured for a halftime reunion. As would make sense, the Herd wasn’t really involved – but then received a giant shout-out at the end of the ceremony from retired coach Mike Rouse.

A few other things that stuck out on this night: Halftime kicked off with a full section conga line around the gym. And as it’s done since 2012-13, the Herd finished the night after the game had ended singing a song from the stands with the team and many from the community filling the floor.

Also recognizable were faces in other sections of the gym of at least a few alums we’d seen in years past. That support is ongoing – the Herd has received quite a bit of social media action from past grads sharing their pride. They’ve also seen it from visiting fans and even an opposing player who said his school’s student section needed to step up to Buchanan’s level.

The Woods has been shaking things up quite a bit this winter. On the road at places like Niles Brandywine, where it joined that school’s “Pink Out.” Supporting other teams besides basketball, including wrestling and competitive cheer. Unifying with the boys basketball team on Tie-Dye Night, when Bucks players also hit the court dressed to match. Herd leaders are even planning to have a spring cheering section for the first time, supporting those often-forgotten teams as well. 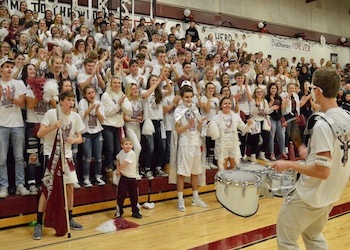 Some Herd leaders weren’t psyched at first with Lollar’s suggestion of Clean Bandit’s “Rather Be” as the soundtrack for the lip dub – they were hoping for something currently popular. But the 2014 jam has grown into this year’s anthem. And Friday, it seemed like no one wanted to go home when the game was done.

“This is really important to us,” Gunn said, “and we really live that saying – there’s no place we’d rather be.”

Please join us: “Instead of coming into high school and it being scary, terrifying, like (these are) bigger people than you, it’s an inviting thing,” Lollar said. “Because you get to have fun with a bunch of people you usually wouldn’t hang out with. In the student section, I stand next to freshmen I don’t talk to (otherwise) ever. But I’m friends with them because we have this.”

Leave a legacy: “I notice when we go on our traveling pep rallies, we see these kids at the elementary school – they’re not even higher than my knee,” Schau said. “And they know the cheers. I don’t know if I was that age and knew how to cheer, but they know the cheers by heart. That’s what makes me want to do it – because those kids know every single cheer. You just grow up. They know now. They know what to do.”

Shy no more: “All of the positivity and all of these people showed me there’s no reason to be scared,” Gunn said. “Something I learned and something other people should learn is you won’t be embarrassed (because) everyone else is doing it around you. It’s a lot of fun.”

We will remember this forever: “It’s something we get to remember (from) high school,” Stuckey said. “There are many kids who can’t be like, ‘We had a student section and we were able to lead it.’ And it’s nice we’re able to say that. The Herd is a family; we’re not just people who know each other, we’re not just a student section. We all care about each other, and it’s nice to have a family away from your real family.”

Next on BOTF: The Buchanan visit concluded this year’s BOTF finalists tour. Beginning Tuesday, fans all over the state may vote for the student section they think should win this year’s contest. Check out Second Half on Tuesday for instructions on how to vote on Facebook, Twitter and Instagram. The champion will be announced Feb. 23.