MUNISING – Some of Izzy Nebel’s fondest memories took root during junior high, while watching Munising games, hearing the older kids yell and feeling a little overwhelmed by the booming of their voices.

“Everyone that I stand around, we just look at each other and scream. We’re so excited,” Nebel said. “It’s just so fun. That’s all I can really say about it.”

Nebel and her classmates in “Stang Nation” – one of five finalists for this year’s MHSAA Battle of the Fans recognizing the state’s top high school student cheering section – are carrying on a tradition of support going back generations and stretching far outside her small town’s border.

The Class D school, on the shore of Lake Superior overlooking the Pictured Rocks, is home to only 200 high schoolers. But it’s the center of pride for their community, and as the first BOTF finalist from the Upper Peninsula, something of an ambassador as well.

Munising was the fourth stop on this year’s BOTF finalists tour, which also has included visits to Yale, Muskegon Western Michigan Christian and Traverse City West and will finish with a trip to Charlotte on Friday. The public may vote for its favorite on the MHSAA’s Facebook, Twitter and Instagram sites beginning Feb. 16, with the MHSAA Student Advisory Council taking that vote into consideration when selecting the champion – which will be named Feb. 19 on Second Half.

This was Stang Nation’s second time applying for Battle of the Fans. The idea was sparked by annual trips downstate for the MHSAA Boys Basketball Finals – 10 families make the annual trek together – and watching Battle of the Fans videos shown on the Breslin Center scoreboard before tip-offs and during breaks in play.

It was nurtured during the fall of 2014, when Munising’s football team made the MHSAA Finals for the first time since 1980 and traveled to Ford Field for the Division 8 championship game. Stang Nation took hold as the official name of the longtime section.

Enthusiasm was stoked again when leaders attended the MHSAA’s Sportsmanship Summit in November in Marquette. That led to the section having theme nights for the first time, and the love isn’t just reserved for the boys basketball team as in other communities – Stang Nation’s “Beach Night” was for a girls hoops game and groups of fans attended most home volleyball games and traveled some too, although many of Munising’s opponents are located an hour’s drive or farther away. 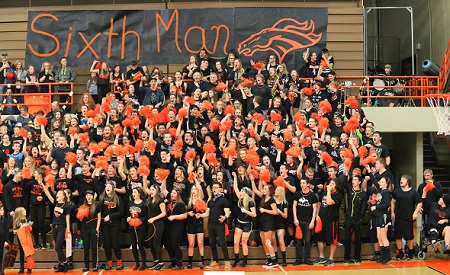 But the filling of a section of bleachers under a “Sixth Man” sign in the school’s gym is only part of the cozy homecourt advantage. The sports teams select “super fans” and players present them with T-shirts. Nebel’s uncle is among many of the recognizable faces from over the years, as he’s always in the crowd wearing a foam orange cowboy hat from the football championship game trip 35 years ago. “Those are the kind of people we have here,” she said.

And then, there are the parades.

That basketball triumph led to a welcoming parade of police cars and fire engines when the team returned to town from Superior Central. And that’s become something of the norm for any win at the District level or higher. Parades through town welcomed the football team back from its playoff wins in 2014 and ended in the school’s gym, where fans gathered to continue celebrating. The girls tennis team got theirs, with a fan hitting tennis balls over the bus into the woods beyond as it drove by and families standing in their yards to welcome the newly-crowned champs.

But the support doesn’t stop there. When Munising’s football team returned from Ford Field two seasons ago, it stopped at the entrance to town – and only continued on once Ishpeming’s football team, which had won the Division 7 championship, joined it in the parade as well as the Hematites made their way back home.

“We’re really supportive of everyone around us,” junior Marissa Immel said. “This fall, our girls volleyball team lost at Regionals to (Crystal Falls) Forest Park. Some of our teammates made a sign for them and went to their Quarterfinal game, and after we gave them the sign to bring to the Finals. They were super appreciative of it.”

It’s an attitude that goes beyond sports. The school sponsored a fundraiser for cancer research at its football Homecoming and raised $4,200 – which would equate to roughly $21 per high school student. It’s not unusual that when someone in the community is struggling with a sickness or other hard times, the town and surrounding communities rally to help without a second thought. One of Nebel’s aunts lost her house in a fire three years ago and received an outpouring of assistance from Munising but also from as far away at Marquette. 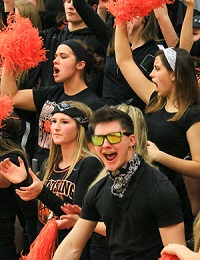 Munising’s smaller student population allows for a little bit different student section setup than at larger schools, where a group of students usually take the reins. Whereas other BOTF finalists have had their leadership willed down or selected by administrators, Stang Nation unofficially follows leaders who have taken charge in other groups at the school – Nebel, Immel, junior Jared Immel (her cousin), junior Rachel Cooper and senior Ian McInnis all are in some combination of student council, National Honor Society and Key Club, and four play multiple sports.

Everyone knows everyone, and anyone is free to kick off a cheer or provide input. The building actually houses sixth, seventh and eighth graders as well, and the high school leaders work to get those younger students involved. Also, a peer-to-peer mentoring program connects high schoolers with elementary students, providing another avenue for inclusion and passing on the good word.

Nebel and her classmates are building plenty of memories in Stang Nation again, most of them including leaving games exhausted, barely able to speak, with sore feet from jumping around in the bleachers.

But they’ll also remember becoming the first Upper Peninsula school to represent in Battle of the Fans – and the opportunity to show the enthusiasm that has lived in Munising long before this winter while passing it on to younger fans above them in the stands.

“I hope we’ve opened people eyes to this, because it’s so fun to participate in,” Nebel said. “It’s just fun knowing that people are going to see what you’re putting into it. I hope other people see that and think, ‘Oh my gosh, that’s a really cool idea,’ and they do it too. Because I want everyone to experience what we’re experiencing.”