By Geoff Kimmerly
Special for Second Half

ZEELAND – Jonah Bunce had been waiting for this opportunity. With Hope College just down the road, the Zeeland East senior had grown up studying the Dutch’s Dew Crew and its powerful student section punch.

Classmate Liz Bays had been looking forward to her time in “The Coop” as well. Her father had coached multiple teams at East Kentwood, and she spent years watching the Falcons’ student section at work and readying for her chance to be part of something that looked like so much fun.

East’s “Coop Crazies” seemingly have had everything necessary to be a force. The section even had a little bit of history, having made the Battle of the Fans II finals in 2013.

But recent history had fallen short. And by the end of last school year, Bays, Bunce and their friends had realized it would be up to them to make up for three years that had fallen way below their expectations.

“What we focused mainly on was just having fun, honestly. We just like to have fun, and we like to keep a positive atmosphere,” Bunce said. “I knew one day I would be up in this position because it’s just something I love to do. And so what we strive (for) is inclusiveness, and we make sure all freshmen, sophomores, juniors and seniors are all appreciated.”

We saw for ourselves how that’s paid off during the final MHSAA BOTF IX visit Friday for Zeeland East’s boys basketball game against Hamilton.

We met first with Bunce, Bays and seniors Abby Beckett, Will Fredrickson and Ryan Stockdale to find out how they’ve created such a happy home again.

The Coop always has been senior-run, and that leadership structure is unchanged. What’s different is the approach.

Between talking things through with younger siblings and their friends, or during classes with students in the lower grades, the senior Coop leaders were able to start fostering a newly-inviting culture pretty quickly. And after the second football game this fall, they knew they had the makings of something special.

But filling the stands for football never has been a problem – the downer is they would empty out after the fall was done.

This winter, though, the good vibes have carried over.

“The Coop,” Bays said, “has become a place where everyone wants to be.”

This year’s rise started on their last day of school as juniors, when Bays, Beckett and Bunce went to athletic director Josh Glerum and told him they wanted to lead the section in 2019-20. “We said, ‘We want to take over The Coop. We want to make this better. And we want to leave behind what we didn’t have the last three years,’” Bays recalled.

What they would create was hatched during summer meetings at the local ice cream shop. It began to play out during the first football game – when, without anything special planned or specifically organized, “We just had fun,” Bunce said, “and everyone realized this is legit. This is awesome.”

The Crazies aim and claim to be mostly impromptu and spontaneous. But they clearly put some planning into a slate of innovative ideas that kept about 200 in The Coop busy Friday from warm-ups until the final buzzer sounded.

The Zeeland East band provided an upbeat soundtrack for a night built around Valentine’s Day and filled with glitter, hearts, and cupid wings. It also was Senior Night for both the girls and boys varsity teams, and the latter made its entrance to the gym prize-fight style, through a door at the back of the student section and through The Coop to the floor.

The section prides itself on getting noisy when opponents have the ball, and the Crazies made their share Friday. From start to finish, they always seemed to have something going, including a halftime ceremony that included passing out roses to mothers cheering for both teams.

The best thing we saw fell under the “we can’t officially suggest this, but we enjoyed it” department. Two section leaders staged a fight in front of the section broken up by the school’s real-life resource officer, a deputy from the Ottawa County Sheriff’s Department who was in on the fun and then led the section in something of a cruiser chase during a first-half break.

His moves were rivaled by a middle schooler whose second-half breakdance was worth the price of admission on its own.

Everyone was feeling the love, and when the beat dropped for “Party Till We Die,” the air above The Coop filled with a “glitter bomb” that more or less defined the night.

“We wanted to get a bunch of a glitter and just throw it up in the air and make it more of a party,” Beckett said. “We love doing that.” 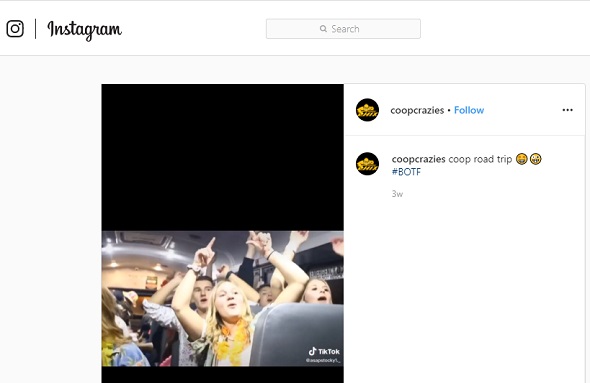 Take some of these tips from the Coop Crazies:

Include everyone: It’s the best way to maximize section power, and as noted above served as a base belief for The Coop’s revival this school year. “It’s not just about the senior class, or one class,” Stockdale said. “Your student section isn’t going to be good unless all four levels are going crazy. We kinda realized when our freshmen are at their best, we’re at our best.”

Trust the process: Coop leaders have picked up specific roles, which simplifies putting together great nights for their classmates. Beckett and Bays always handle social media. Fredrickson is the flier guy, putting together the postings hung around the school. Stockdale and Bunce are the digital masters and build videos for the school’s daily announcements. All have specific jobs, and as a group they’ve found their groove.

Find help in the administration: Glerum taking over as athletic director before the 2018-19 school year definitely had an impact on The Coop. It’s not a coincidence – Glerum was the athletic director at Muskegon Western Michigan Christian when its section was a BOTF V finalist in 2016. Last year’s Coop leaders began meeting more regularly so everyone was on the same page, and this year he’s been available to provide whatever the section needs. Also, he never brought up Battle of the Fans. But as soon as Bays asked what it was all about during the fall, he sprung into action and made sure the Crazies had all the information.

Think outside the box: The Valentine’s Day theme may have seemed a little obvious given game night was Feb. 14. But we had to admire how the section honored moms for both teams, how they got local law enforcement involved and all in all how they supplied the highest level of creativity we saw this BOTF season.

Home sweet home: “I grew up watching this stuff and I realized how much fun everyone was having, how much everybody enjoyed it,” Bunce said. “I think, coming from my personality, I enjoy having fun and going crazy. So I think when I saw that, I realized this was a place where I could show those emotions.” 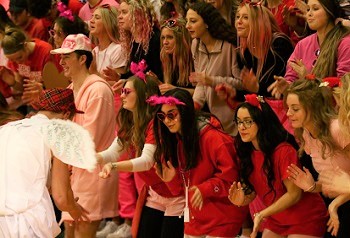 It’s our time: “I think the big thing this year that has been a change is our whole senior class is trying to just enjoy the moment,” Stockdale said. “We preach, ‘It’s just a party.’ We don’t promote it as a game – just a party. Just come and have fun.”

Let fun take its course: “We weren’t trying to do anything special (to get this restarted),” Bunce said. “We would just put it out there on social media, and it was just the word (getting around) and everybody knowing that it was fun. Then it would just take care of itself.”

This is why we’re here: “Everything’s fun. Just cheering on your buddies – there’s nothing better than seeing our buddies succeed,” Fredrickson said. “And when they fail, you’re still there to support them.”

Next stop on BOTF: With all three finalists visits complete, online voting will begin Tuesday on the MHSAA’s Instagram, Twitter and Facebook feeds and continue through 4 p.m. Thursday. The MHSAA’s Student Advisory Council will consider those results when selecting the winner. The Battle of the Fans IX champion will be announced Friday, Feb. 21.