EAST LANSING – The Escanaba softball team that returned to Secchia Stadium on Thursday may not be too different from those that made trips to the Division 2 Semifinals in 2016 and 2017 as well.

But a couple of notable characteristics have the Eskymos sticking around for a few more days this time.

Even if his hitters start slowly, coach Jamie Segorski said, he knows to remain patient – they will come through. And a few runs frequently are enough with sophomore Gabi Salo in the pitching circle.

Escanaba didn’t get a hit until the fourth inning of Thursday’s 2-0 win over Eaton Rapids. But when the Eskymos struck, Salo made it stand, allowing only four hits to help her team to its first MHSAA championship game in this sport since 2003.

“This year we have a lot more energy in the dugout. We stayed up the whole time, never got down on ourselves,” Salo said. “A lot of people on this team have been here before, and that makes a difference.

“We had a feeling (we’d get back), but you don’t want to get too confident because you never know what’s going to happen. (But) we definitely are excited for Saturday.”

Salo, who already has committed to play collegiately at University of Wisconsin, threw three scoreless innings of relief during last year’s trip as Escanaba fell to Richmond in the Semifinals for the second season in a row.

She went the entire way Thursday, striking out seven and walking only one batter.

Eaton Rapids sophomore Grace Lehto was similarly stellar, giving up only five hits with five strikeouts and no walks.

But the first Escanaba hit was a double to the left-field wall by junior Lexi Chaillier, who moved to third on a wild pitch and then scored when Eaton Rapids threw the ball into the outfield trying to double her up on a pop up.

Senior shortstop Taylor Gauthier launched the other significant shot, a triple to right field in the sixth inning, and she was driven home by senior third baseman Madison Griffin.

And that was plenty for Salo.

“She’s mature beyond her years. She doesn’t get rattled,” Segorski said. “They put a couple balls in play, two infield hits and a decent shot to left field. She just pitches through it. She just gets the job done. She’s just so emotionless out there until after the game.”

VIDEO: Taylor Gauthier had a triple in the sixth inning and would score later in the inning. 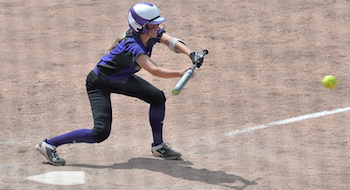 After defeating top-ranked Stevensville Lakeshore in the Regional Final and previously undefeated No. 2 Spring Lake in Tuesday’s Quarterfinal, the Rams (32-8) unloaded 10 hits in their first Semifinal appearance since 1982.

Senior second baseman Haley Mines was 3 for 4 with three RBI, freshman centerfielder Jordyn Holland drove in two runs and scored twice, and senior pitcher Hayley Kreiger drove in three runs, scored a fourth and allowed only one hit and no walks over five innings in the circle.

“The kids are just really focused on what they want for the end result, and we really wanted to get to Saturday,” South Haven coach Wilma Wilson said. “We’re trying to take it step by step and moment by moment. … The kids were just feeling great today. All the kids in warm-ups were like, ‘I’m hitting good Coach. I feel good today.’

“I think we’re staying loose. I think we are focused and we’re zoning in on what we want to be the end product. We’ve been counting down seven games since we had a team dinner before our Districts. So every time, we go ‘7 … 6 …’ and now we’re on the 1.”

Senior first baseman Kerstin Hamann hit safely for Divine Child (22-10). The Falcons were back at the Semifinals for the first time since 1998.

VIDEO: Haley Mines gave South Haven all the scoring it would need in the first inning with this bases-clearing double.

PHOTO: (Top) An Escanaba hitter connects during Thursday’s Semifinal win over Eaton Rapids. (Middle) A South Haven hitter squares up for a bunt.