EAST LANSING – It may not have been a perfect game.

She entered the Division 3 Semifinal against Pinconning with nine no-hitters this season, including five perfect games, and reaching double digits by silencing the Spartans’ bats to lead St. Mary to a 6-0 win and berth in Saturday’s championship game.

Beaubien, who also averages 16 strikeouts per game, hit her average as she fanned 16 batters without allowing a walk.

Only a pair of third-inning errors prevented Beaubien from notching a perfect game. Those errors came at the start of the inning and gave Pinconning (30-14) a shot of momentum by putting runners on the corners with no outs. Beaubien, however, took the air out of that momentum by striking out the next two batters and inducing the third out on a fly ball to center field.

“That was a big situation to get out of,” said Beaubien, when asked about the jam she was in during the third inning. “They had runners on first and third with no out. They had their number nine hitter coming up, then it was back to the top of the order. So it was a big deal to get out of.”

Beaubien had a little wiggle room to work with thanks to a four-run first inning that staked St. Mary to a 4-0 lead.

“The early runs help a lot,” said Monroe St. Mary coach John Morningstar. “We feel that if we get three or four runs, Meghan is pretty much automatic. Obviously it made it a lot easier with the early runs. It gave everyone some breathing room.”

Having Beaubien in the circle firing strikes also made it easier for the St. Mary players and coaches to take a breath. Beaubien entered the game with a Monroe County record 430 strikeouts to her credit.

“This is what she does,” Morningstar said. “She averages 16 strikeouts a game. This was her 10th no-hitter, and she has five perfect games. At the level of which she is pitching, what she does out there does not surprise me. Obviously you don’t expect a no hitter or a perfect game, and it’s unfair to her to expect one.”

For Beaubien, who has already given a verbal commitment to the University of Michigan, no-hitter number 10 was more than special – even if it wasn’t a perfect game.

“This is definitely up there,” Beaubien said. “To get a no-hitter in the state semifinals and get us into the state championship game is a pretty big deal. I never try to go out and throw a no-hitter and don’t expect it, but I do expect a lot out of myself when I go out there.”

“To have a no-hitter in the state semifinals, it gives us a lot of confidence going into tomorrow,” Beaubien said.

With more than half its roster freshmen, including four starters, the future looked promising for the Vikings (37-7) at the start of the season.

That future arrived early, as halfway through the season Bronson coach Becky Gray knew she had a team capable of accomplishing special things. 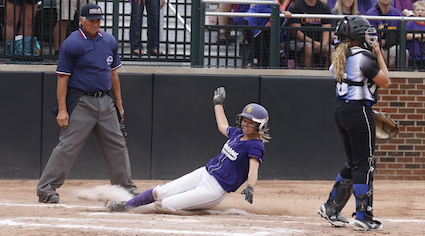 “At the beginning of the year, I honestly didn’t know how good we would be,” Gray said. “We graduated five seniors from last year, and I did not know how the freshmen would do. As the season went on, I knew it was a possibility.”

It also was during midseason that senior pitcher Skyler Sobeski took her game to the next level. Already an accomplished pitcher, Sobeski began a run in mid-May that saw her allow only one earned run through the end of the regular season and up through Friday’s win.

“It was definitely exciting pitching in front of all these people here,” Sobeski said. “I never pitched in front of a crowd this big before.”

Sobeski relied on her normal pitches to get the job done.

“I was throwing my curves and rises,” Sobeski said. “That is what I usually throw.”

Sobeski also pitched with the lead after the first inning. Bronson took a 1-0 advantage as Kelsey Robinson led off with a walk and then came in to score on an error after a sacrifice bunt by Hannah Hoover.

Bronson added four insurance runs in the bottom of the fifth inning. Freshman Payton Robinson started the rally with a single. Fellow freshmen Kiana Mayer then reached on an error, and freshman Kaitlyn Czajkowski added another single. Robinson then delivered a two-run single, breaking the game open, and Sobeski later helped her own cause with a two-run single to close out the scoring.

The win was the 18th in a row for Bronson, and the Vikings have outscored their six playoff foes by a 49-1 margin. Montague, making its first Semifinal appearance, finished 22-13.