TEMPERANCE – Just before the Temperance Bedford wrestling team was to enter the arena at Kalamazoo’s Wings Event Center for opening ceremonies of the MHSAA Team Finals this winter, head coach Kevin Vogel told Connor Bartlett he had a job for him.

“I had no idea what it was,” Bartlett said. “Then, he called me up to the front and handed me the flag.”


Bartlett had been chosen to usher in the event. It was a moving tribute to the 17-year-old Bedford athlete who, about a year ago, wasn’t sure he would still be alive.

“It was a great honor,” Bartlett said. “I had never been to the state finals before. I didn’t know anything about the ceremony.

“We were the first team to enter the arena. They had me carrying the flag for the City of Kalamazoo. I led my team and all of the wrestlers into the arena. It was amazing. It’s something I’ll never forget. To be at the forefront of my team and lead them was fantastic.”

Bartlett was the perfect choice to lead Bedford into its first trip to Finals weekend since 2016. The senior wrestler missed his junior season on the mat while he battled testicular carcinoma. At times, he was forced to make peace with the possibility that the cancer might win.

“I always kept that in mind – that I wanted to get back on the mat. That was a big source of inspiration and something I wanted,” he said.

Bartlett went to Ottawa Lake Whiteford until his freshman year, when his family moved into neighboring Bedford Township. He had never wrestled before but had heard about Bedford’s storied wrestling program.

“My brother had started wrestling a year or two before me,” he said. “I had always heard about Bedford’s wrestling program. My freshman year came, and I played football at Bedford. I thought I would wrestle as a way to stay in shape for football. I ended up loving wrestling so much I decided to give up football and concentrate on wrestling.”

That first year on the mat, he said, there was a huge learning curve.

“My first year was pretty rough,” he said. “I only won a single match all year.”

His sophomore year saw rapid improvement, enough that he won a JV tournament.

“I do not consider myself a natural at wrestling,” he said. “It was 100-percent hard work. Actually, most of it was the great coaches that Bedford has.”

He anticipated an even more improved season as a junior, but that had to be put on hold. Near the end of his sophomore school year, Bartlett was watching TV at home when the right side of his body went numb. It felt, to him, like it fell asleep. He didn’t think much of it until a short time later he was at school and it happened again. This time, it was his entire body that went numb. 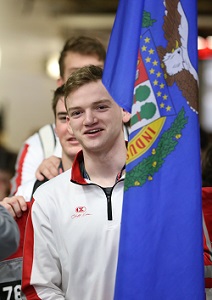 “The paramedics came,” he said. “I knew something was wrong.”

After a series of tests, doctors soon discovered Bartlett had testicular carcinoma. If that wasn’t enough bad news, doctors told Bartlett it was stage four.

“It had spread to my lungs, my brain and part of my kidney,” he said.

He began chemotherapy treatments almost immediately. He had tumors removed, went through more treatments and had a bone marrow transplant that kept him hospitalized for about 40 days. It was during that time that Vogel brought the Bedford wrestling team on a surprise visit to see him at the University of Michigan Hospital in Ann Arbor. The visit had a major impact on him, Bartlett said.

“It was pretty severe,” he said. “The doctors told me everything. I didn’t want them to hold anything back.

“Throughout the process I was at peace. I was calm. I had 100-percent faith if I died, I would wake up in heaven. I had no doubts about that.”

While things looked bleak at times, Bartlett pressed on, determined. The treatments worked. Finally, the last spot of cancer on his lungs went away, and the cancer remains in remission. He’s had a couple of follow-up tests and is cancer-free now.

He rejoined the wrestling team this year. Bartlett had lost between 20-30 pounds but was able to get back to his wrestling weight for the season.

“I had done some stuff, but I had just started to lift and run around the time the season started,” Bartlett said. “Once I got used to it, I was just working out with the team. It was an ongoing thing. It felt good to get back into the swing of things. I was done with that portion of my life.”

It was about midseason that he began to feel like he was back in wrestling shape. He ended the season with a 13-14 record.

“It was better than I could have expected,” Bartlett said.

Now that wrestling season is complete, Bartlett is focused on the next stage in life. He wants to go to college, study nursing, and become a missionary through the church in Lambertville where his dad, Brett Bartlett, is pastor. He wants to take the message of God to other countries. A couple of years ago he went on a mission trip to Hungary and helped put on what amounted to a vacation Bible school for children. “It was awesome seeing all of these kids accept Christ,” he said. “It was great to be part of that.”

Bartlett is grateful for his church, family and teammates who stuck with him through the entire ordeal. His dad, mom (Kim) and three siblings were always by his side.

“They were with me 100 percent,” he said. “I always had someone by my bedside. They gave up part of their lives to be with me.”

PHOTOS: (Top) Temperance Bedford’s Connor Bartlett leads his team into the Wings Event Center arena before the Division 1 Team Quarterfinals on Feb. 28. (Middle) Bartlett prepares to carry the City of Kalamazoo flag during the procession. (Click for more from HighSchoolSportsScene.com.)