HOWARD CITY – Tanner Astrauskas is back on track to achieve his goal of becoming an MHSAA Finals champion.

Tragedy almost prevented him from realizing that dream.

Astrauskas is a senior 140-pound wrestler for Tri-County High School. He had a solid start to his career, winning 35 matches as a freshman and then as a sophomore going 44-7 and placing eighth at 125 pounds at the Division 3 Individual Finals.

But just before he stepped onto the mat to wrestle his first match that 2017 weekend at The Palace of Auburn Hills, Astrauskas received disheartening news that changed his world in an instant.

"Just before the finals of my sophomore year I found out my best friend killed himself, and I found that out just before I wrestled at state," Astrauskas said. "That whole tournament I was pretty broke, I didn't even want to wrestle. I got pinned in my first match by the kid who ended up winning it, and then I won my next two matches 4-2 and 5-0 to make it into the medal round. I was pretty happy I placed considering the circumstances."

Best friend Casey Eckert was only 15 when he died. The circumstances lingered for Astrauskas when he returned home to Howard City, and they sent him into a downward spiral.

"Two days after state we had his funeral, and that took me to a dark place," Astrauskas said. "I wasn't doing so well in school, and I ended up running away from home."

Astrauskas ran away to Tennessee to stay with friends, but it was another friend who helped bring him back to Michigan.

"My friend, Hunter Brimmer, was at Olivet (College) and he talked me into coming back and (being) with my parents,” Astrauskas said. “And they ended up picking me up from Olivet and taking me home."

But Astrauskas was still empty and searching for answers. 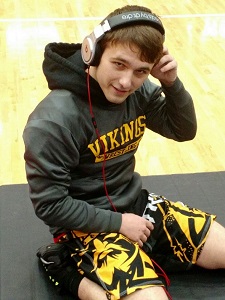 "After coming home, I still needed to get away to find myself and I ended up moving to Shelby and got my own place and went to school at Shelby High School my junior year," Astrauskas said. "I just wanted to move away and get my head right, and learn what it took to be on my own."

Astrauskas lived on his own in Shelby under the watchful eye of close family friends and didn’t play any sports as a junior, and the experience seemed to help him grow. Then this year, he made another decision in that growth process. In November, after football season at Shelby, Astrauskas decided he was ready to come home and face those difficult memories.

Since he was moving back in with his parents, he was able to wrestle for Tri-County this winter. And with a clearer head, he has mat goals again.

"I just felt like I wanted to move back and finish my senior year with friends I grew up with," Astrauskas said. "And I felt I could achieve my goals and excel better at Tri-County. I want to win a state championship."

Astrauskas is off to a great start. He is 12-1, losing his first match of the year Saturday to Kent City's Evan Jones in overtime in the 140-pound final of the Sparta Invitational.

One of his biggest wins this winter was a 5-3 decision over Madison Heights Lamphere's Matt Tomsett – the Division 2 Finals runner-up at 130 pounds last year.

Astrauskas also is doing great in his school work, currently carrying a 3.45 GPA. And Tri-County coach Corey Renner has seen a different person in his wrestling room.

"I think this whole thing has helped him a lot," Renner said. "He's always been a good wrestler, but he was the kid that if you yelled at him to run faster in sprints, he would go slower and end up in last. But this year he is first, he seems to have more focus and is more confident. He has become a leader, he has been good with the young kids. He has come a long way."

Life can be cruel, and for Astrauskas, a lot of cruelty has happened at a young age. But he is taking everything as a positive now, fueling his focus on getting to Ford Field for March 1-2 and this season’s Individual Finals – where he’ll compete to reach the top of the podium.

"To anyone out there going through depression, it does get better," Astrauskas said. "There are other ways to deal with it. Get therapy, support from your friends. You don't need to turn to drugs or alcohol, or even worse. Things will get better."