It took two decades, but Casey Baranoski is on the brink once again of reaching wrestling's highest stage in the state of Michigan.

As a wrestler for Comstock Park High School during the late 1990s, Baranoski was a pioneer in the sport, becoming the first female in the state to record more than 100 wins while wrestling in the 103 and 112-pound weight classes.

She finished with a highly respectable 123-38 record for the Panthers, and was a two-time Regional qualifier.

But she could never take that final step to make it to the MHSAA Individual Finals.

Now Baranoski is a pioneer in the sport once more, as two weeks ago she officiated the Division 1 Individual Regional at Grand Haven High School, one step away from state.

"This is a fun sport to be part of, and it never quite gets out of your blood," Baranoski said. "(Me getting into officiating) is my brother Tom's fault. He got me to ref for the first time. And I work for a credit union, so I have banker's hours, so it was perfect for my schedule. It just worked out."

That start was five years ago, and slowly Baranoski has been working on her craft in stripes, earning the much needed experience it takes to earn an MHSAA Tournament assignment. 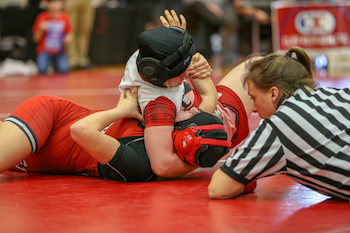 Unlike as a competitor, an official’s quest to make the Finals is not entirely in her or his hands. Officials are graded each match and tournament they work during the season by the coaches, and grades are tabulated. With high enough scores, an official might just get an invitation to ref the sport's best athletes.

Steve Shutich, who has been officiating high school wrestling in Michigan for 29 years, was the head official at the Grand Haven Regional two weeks ago, and he believes Baranoski is close to getting her ticket stamped for the trip to the Finals at Ford Field.

And he should know – he has officiated 16 individual and four team Finals.

"She did well," said Shutich, who is on the board of the West Michigan Wrestling Officials Association. "It proved that she is for better matches. She held her own that day."

Baranoski believes she is up to the task as well.

"I thought I did pretty well that day. It was nice to be accepted by the coaches," Baranoski said. "Wrestling and effort go hand in hand, and you have to rely on effort, not only as a wrestler, but also as a ref. I didn't get booed out of the gym, so I think I did pretty well."

Baranoski did get some experience officiating state finals matches this year. She was an official at the first girls state finals hosted Feb. 3 by the Michigan Wrestling Association.

"That was pretty cool," Baranoski said. "There were 165 girls at Adrian College, and it was a good experience."

Experience that Shutich says Baranoski needs to take one more step for the MHSAA Finals.

"She just needs a little more seasoning," Shutich said. "She'll be ready. She has what it takes to be the best. She knows the sport."

But Baranoski wants no favors.

"I want to earn it down there. I don't want it gifted," Baranoski said. "If my ratings are there, great. If it happens that way, outstanding."

PHOTOS: (Top) Casey Baranoski raises the arm of a winner during the Girls Wrestling Finals on Feb. 3 at Adrian College. (Middle) Baranoski watches for a pin. (Photos by GRW Action Photography.)