But the Beavers never will forget how they fulfilled aspirations and inspired future generations by winning multiple first-time championships this fall.

The MHSAA/Applebee’s “Team of the Month” for October clinched its first league and District championships in program history, earning a banner-sized place on the gym wall alongside a number of Beaverton programs that have had success over the decades.

The Beavers claimed the Jack Pine Conference title during the final week of October with a 13-1 league record and by two victories over runner-up Houghton Lake. They then hosted and won their Class C District, sweeping both matches of the tournament including the final against Coleman on Nov. 2.

“When I first came here, the team I had had a lot of talent. But we would go to tournaments and not win a set. I’d say, ‘How did we not win a set? We’re better than some of these teams.’ What we realized is they didn’t know how to win, didn’t know they deserved to win. Once we tasted winning, we didn’t need to teach it anymore. We’ve tasted winning a conference, winning a District, and we can definitely do it again.”

Evans finished his ninth season leading the program, and surely the Beavers have come a long way – when they won 12 matches his first season, he was told that was the program record for wins.

This fall, Beaverton finished 35-11 for its second-most victories behind a 38-12 run a few seasons ago – but with this one against a more competitive slate of opponents. The Beavers won tournament matches early against Rogers City (still alive in Class D) and Muskegon Catholic Central (which lost Thursday) and took competitive losses to Corunna (still alive in Class B) and Saginaw Swan Valley (which lost to Corunna during their Regional).

“I just realized that even when we lost to these good teams, there was no let up, no quit,” Evans said. “A lot of times when you play ranked teams above you, you’re just in line – this is just happening (to us) – and this team didn’t have that. They’d just fight, no matter what the score was. We could be down a set and they’d fight. We could be down 10 points and they’d fight. And if teams let up on us, we could come back and get them.”

Beaverton had finished second in the Jack Pine three times under Evans and third twice, including last fall. The Beavers also had made District Finals twice during his tenure, most recently in 2013. 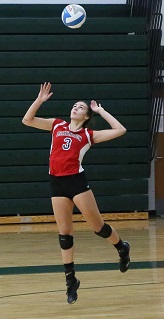 There definitely were expectations this fall. Three years ago the team had no seniors, forcing Evans to bring up sophomores who were talented enough to play but could’ve also benefitted from more time on the junior varsity.

That said, he’d noticed in the past a big jump in players’ understanding of the team’s system after their second seasons on varsity – a good sign with this the third for those seniors who came up as sophomores. Seniors this fall filled all but one starting spot.

Left-side hitter Ali Aldrich led the Beavers in kills for the second straight season, this fall with 461 to top a balanced attack that included four on the outside capable of killing points plus two middles who often were forgotten by defenses because of that outside attack. Another senior hitter – Reiss Faber – also spent half her time setting the offense, and senior libero Dallas Longstreth set season (803) and career (1,467) records for digs in keying the defense.

Evans doesn’t expect another eternity to pass before Beaverton earns more hardware. Two freshmen came up this season and made big contributions – Molly Gerow was the second-leading hitter with 295 kills, and Taylor Inscho handled setting when Faber was not.

Having those freshmen as part of this run was by design. Evans preaches for his players to hand down a legacy and tries to get younger players on the roster to soak up some of that experience.

The legacy these seniors are leaving behind just happens to include a couple of championships.

“Our gym doesn’t have a volleyball banner, and we always talk about let’s be the team that puts them up,” Evans said. “Our goal is always that, but it’s not our focus – we focus on what we do, the things we can control, who we are playing, and doing our jobs. (But) they’re excited. This team has had energy all year. I’m still playing videos over and over of our last points when we win, when we won the conference, when we won the District. Just the excitement level of the players and fans, it is just fun to watch. It was just contagious this year, the excitement and emotion they put into the game.”

Past Teams of the Month, 2017-18
September: Shepherd girls golf - Report