Paul Moggach has never been much for looking back.

And as he begins his first season away from the Brighton hockey program in more than three decades, he’s still looking ahead.

“I’m thinking about what I’m going to miss more than the mark I left,” he said in a phone conversation last week. “I guess I enjoyed so much of the time I had, the opportunity to coach at Brighton, I’m thinking more how I fill the time and the things I'll miss.”

Moggach (pronounced MUG-uth) retired as Brighton’s coach this past summer after 25 seasons and having led five teams to MHSAA Division 1 championships. He compiled a record of 466-172-47 during that period.

But that’s not what he remembers most, nor why he wants people to remember him.

“I would like them to remember the teams and players who played for me and my assistants, more than me,” Moggach said. “We have so many blessings and opportunities in our lives, and hockey was one for me and hopefully for the players and assistants I worked with.”

One of those assistants was Kurt Kivisto, who joined the Bulldogs originally as a team manager more than 20 years ago and was a player at Brighton. He eventually won a national championship at Michigan State before rejoining the program as an assistant coach a decade ago.

“The No. 1 thing I’ll take from him is sticking by your beliefs and not sacrificing those beliefs for the team,” said Kivisto, who was named Moggach’s successor in September. “He sticks by those beliefs and ... he’s not willing to sacrifice that even if it could hurt the team. The character and integrity he has, how he treats people with fairness and what he believes is right is the biggest thing I’ll take.”

A stepson, Damon Whitten, played for Moggach at Brighton and at MSU before becoming an assistant coach and eventually the head coach at Lake Superior State, where he is in his eighth season.

Asked about Moggach’s impact at Brighton, Whitten said, “I’m not sure you can measure it. Your mind goes to the hockey players who have come to Brighton, and that’s a big part. But I think it goes beyond that. The money they’ve raised over the years for different families in need, for example. He’s had a big impact, and the players he had were a big part of that, but it goes well beyond that, and he did it the right way. Thirty-plus years (in the program), and I’m not sure you can count more than a handful of times where he made a bad decision or handled things poorly. He did things the right way, every day, all of the time, and I think it’s why he was so successful for so long.” 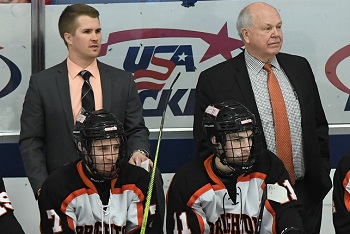 The team’s charitable works were mostly kept under the radar – Moggach’s reasoning being his players had been given much, it was their turn to give back, and he didn’t want people thinking they did those things for publicity.

Moggach joined Rick Bourbonais as an assistant at Brighton in the mid-1980s, then switched roles with him for the 1996-97 season.

He realized Brighton’s potential in the 1992-93 season, when the Bulldogs upset perennial state power Trenton in the Class A Quarterfinals before losing to Detroit Catholic Central in a Semifinal.

He slowly began to build the program, getting good players and a schedule that would challenge them.

“You get the players by building a good culture,” he said. “Back in the day, when I started, we weren’t very disciplined and our league wasn’t very disciplined. So I think we realized we had to build that, and I could have an influence on building that in Brighton.”

Along with the culture, Moggach looked for an edge whenever he could find it. He was talked into making a trip to the Keweenaw Peninsula by one of his player’s parents, and found enormous benefits for his team, both competitively and in team bonding.

“It’s a lot about the little things we do,” he said, “that we find joy in, and create those opportunities. Creating the little moments really can build to bigger moments. We played capture the flag one day in about two feet of snow.

“Almost killed them,” he added, chuckling. The exhausted players didn’t have much left for the game that night, but spending time together for four days in a bus and hotel room always brought the team closer on and off the ice.

That first UP expedition also led to more teams making the trip, for team bonding and a glimpse of a part of the state, and themselves, they might never have seen otherwise.

“We didn’t do that for long,” he said. “But we always came back saying we were better together because of that experience.”

Bob Nelson had three sons play for Moggach, and Nelson’s wife, Kris, was president of the team’s booster club during their involvement over nearly a decade in Brighton hockey. Nelson also coached the program’s younger players for five seasons.

“We got to know the Moggachs really well,” he said. “It was a good experience, both as a coach and as a parent as well.”

Moggach introduced other things, including an emphasis on nutrition and off-ice training, that players resisted at first until they saw the benefits. 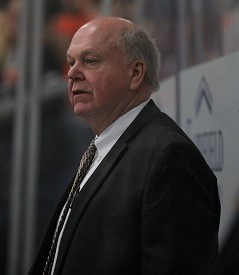 He savored conversations with referees and opposing coaches before the games and even the occasional reporter after games.

But his first priority was the players. At times he would erupt in practice at a player or, more commonly, the team, and the boys soon learned to hear the message, not the volume. But for a couple of seasons, they also wrote some of his wilder statements down in a notebook after practice.

One year, they read some of them at the banquet, and after each one, Moggach’s wife, Sharon, would look at him and ask, “Did you really say that?”

Moggach would laugh and confess to remembering he had actually done so, then laughing.

“He knew part of what made the program good was his relationship to the players,” Nelson said. “If it was a good time, he wanted to enjoy it, even at his own expense at times.”

Moggach has staying in the background this offseason, letting Kivisto shape the team.

Asked if he were willing to fully switch coaching roles, as he and Bourbonais did a quarter-century ago, Moggach laughed.

“No,” he said emphatically. “Rick wasn’t in his 70s when we made the switch. Kurt needs his time. I’ll be there if he needs me.”

Moggach, who is 74, still works fulltime as the University of Michigan’s director of risk management.

He plans to spend more time with his wife and watch his grandsons play hockey, as well as catching some Lake Superior State games.

“I was really blessed to have Rick and Brownie (longtime assistant Mike Brown) along for the ride, and then to get Kurt involved,” Moggach said. “They weren’t the only ones, but they were the kids for me.

“The other thing is the support from the Brighton (High School) administration, the teachers, and our community. There are more people to thank than I could ever bring up. I do think that, all together, it was a great run. It couldn’t have been any better.”