PLYMOUTH — Harrison Fleming pictured himself in this moment, throwing his gloves in the air as the final buzzer sounded, getting mobbed by teammates in a wild celebration on the ice at USA Hockey Arena.

He envisioned this even when his status on Brighton’s hockey team rarely had him in the crease on game nights.

“Honestly, I kind of did,” Fleming said. “I told myself I wanted that. I didn’t want to ride the bench any more. So, I did whatever I could to start. I’m just glad it came out that way. Hard work pays off.”

It paid off for Fleming and his Brighton teammates in the form of a fourth MHSAA Division 1 championship in the past seven seasons. The Bulldogs repeated as Division 1 champs with a 5-2 victory over Saginaw Heritage Saturday night.

Fleming started only two of Brighton’s first 16 games until starter Robert Pegrum, last year’s varsity backup, got injured. Fleming, the junior varsity goalie last season, played well enough to earn the No. 1 spot for the playoffs, even when Pegrum returned.

Fleming allowed more than two goals only once in 13 starts, a statistic that is even more impressive considering nine of those starts were against state-ranked teams.

The 6-foot-2 junior turned aside 21 of 22 shots in a 2-1 victory over top-ranked Detroit Catholic Central in the Semifinals before stopping 23 of 25 shots against seventh-ranked Heritage.

“It’s unreal, but I couldn’t have done it without all them,” Fleming said of his teammates. “They played their butts off for me. That’s all I can ask for. Great outcome.”

Fleming went 6-0 in the playoffs with a 1.20 goals-against average and a .944 save percentage.

Fleming’s first big start of the season came Jan. 30 against Hartland. The Bulldogs lost, 2-1, but he played well enough to open the eyes of the coaching staff.

That Hartland team, which is Brighton’s biggest rival in Livingston County, won the Division 2 championship eight hours earlier. The quality of hockey in the county is a source of pride.

“I played with a lot of people on the Hartland team,” Brighton defenseman Brody White said. “Jake Gallaher, (Josh) Albring. I’m happy for them, just as happy as for us.”

“I’ve got a lot of friends on that team,” Brighton defenseman Sam Brennan said. 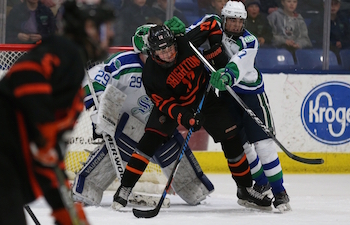 White and Brennan are rare four-year varsity players, coming in together as freshmen in 2014-15 and leaving together with two MHSAA championships and a runner-up finish as sophomores.

“It’s amazing,” White said. “I wouldn’t want to do it with anyone else, that’s for sure. It’s definitely been the best four years of my hockey career.”

Heritage did its best to dispel the notion that the Semifinal game between perennial powers Brighton and Catholic Central was the de facto championship game. After surviving a 3-2 overtime Semifinal against Traverse City West, the Hawks had plenty in the tank to push Brighton for the full 51 minutes.

“It went down right to the end,” Heritage coach J.J. Bamberger said. “After the game, for a few minutes, I reflected. For anyone who said it was a shame Brighton and C.C. weren’t playing in the championship game, I hope they watched what our boys did, because our boys played their hearts out and were in that game the entire time.”

The Hawks (22-5-3) were only the second team from Saginaw to reach an MHSAA Final. Saginaw Nouvel lost 6-0 to Grosse Pointe Woods University Liggett in the 1990 Class B-C-D title game.

It was a one-goal game until Evan MacDonald poked the puck into the net while breaking up a pass in front of the Heritage goal with 5:07 left in the third period.

“He was coming up the middle,” MacDonald said. “He was going to make a pass to the guy on the stretch side. I just put my stick down and it ended up bouncing in.”

Will Jentz put his second goal of the game into an empty net with 57.7 seconds left.

“They’re a quality team,” Brighton senior Adam Conquest said of the Hawks. “We were not expecting it. We knew they had skill. We knew they could score. They had us the first two periods, but we pulled it out. It was a really good hockey game. I give them all the credit in the world.”

Brighton (24-6-1) jumped out to a 2-0 lead by the 12:22 mark of the first period on goals by Mathew Kahra and Jentz. Heritage cut the deficit to one goal on a power-play goal by David Helpap with 2:47 remaining in the period.

Following a scoreless second period, freshman Nate Przysiecki temporarily gave Brighton some breathing room by scoring with 15:49 left in the third. The Hawks kept pushing, getting back within a goal on John Michael Watson’s power-play score with 12:27 left.