BATTLE CREEK – Laingsburg passed the eye test, but Bronson proved to be the real thing.

The Wolfpack stood out athletic and tall, and playing in the Class C volleyball championship match against two-time reigning champion Bronson didn’t seem to intimidate them Saturday afternoon at Kellogg Arena.

Once they hit the floor, Laingsburg started out great, winning the first game.

It was a dramatic change from the first game to the second for the champs, who finished the year 59-9-2.

“We didn’t really make any adjustments,’’ Bronson coach Jean LaClair said. “We just tried to focus on what we needed to do on our side of the net. I thought it was a pretty gutsy performance because Adyson (Lasky) tweaked her ankle and Keona (Salesman) hurt her thumb. I said, ‘You guys want to play or do you want me to put a sub in?’ They both wanted to stay on the court and play through that.’’

Salesman led the comeback with 19 kills, with Jolie Smoker adding 12 and Ashton Wronikowski 11.

“We got our mental game together,’’ said Salesman. “We reset our minds. We knew that we had to come out stronger than we did the first game. We came out thinking we got this.’’

The Vikings scored five of the first six points of the first set. Laingsburg responded by getting to within a point twice before tying the match on an ace by Maya Ferland. 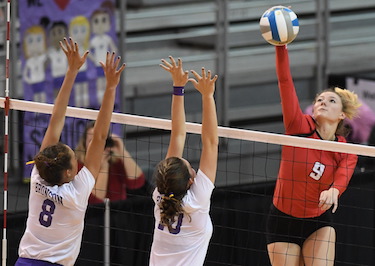 Bronson scored the next five points with Salesman recording back-to-back aces to give her team a 13-8 lead. But the Wolfpack went on a run of their own to tie the game at 15-15, and took the lead on a kill by Ferland.

Imposing their will at the net with the 5-foot-10 Sophie Strieff (14 kills), 6-foot Ferland (14 kills) and 6-foot Alex Randall (16 kills), the Wolfpack looked the part. And they stunned the back-to-back champs, never trailing after tying the first game as the trio up front fired at the Vikings from all different angles.

“We never talk about the other titles. Each year is different,’’ LaClair said. But in the second game the Vikings played like they were champions, again scoring five of the first six points to set the tone. Lacking execution, the Wolfpack fell behind 15-9 with sloppy play at the net, and Bronson went on to tie the match.

The all-important third game saw the Vikings jump out to an 11-7 lead only to have the Wolfpack get to within 12-10. But from there, Bronson’s experience and poise took over as the defending champs kept Laingsburg off balance and got help from the Wolfpack’s unforced errors. Bronson led 20-14 before Laingsburg rallied to within 20-17 on a spike by Tanner Butler. But despite an anxious moment or two, Bronson prevailed to go up 2-1.

Laingsburg led just once in that second game, but took a 9-8 lead in the third when Bronson hit the ball into the net.

But after tying the score again 9-9, the Vikings charged ahead with nine of the next 11 points to take a commanding 18-11 lead with their third straight title now within reach.

Laingsburg senior Grace Gregg had 40 assists as the Wolfpack (41-18-3) capped their first championship match with the best finish in program history. Laingsburg entered the postseason as only an honorable mention in the final Class C rankings.

“This was an incredible experience,’’ said Strieff. “It (was disappointing) that we lost, but it was great to get here.’’