Three seasons after finishing her freshman year at Secchia Stadium, the Fighting Scots’ ace once again has her team one more win from its first MHSAA softball championship.

Gehrls tossed a three-hitter and struck out nine to kick off the Division 1 Semifinals on Thursday, and also drove in the game’s lone run in Caledonia’s 1-0 victory over Warren Regina.

The Fighting Scots will face Hartland in Saturday’s 10 a.m. championship game, their second in four seasons. Gehrls as a freshman pitched the Scots to the Division 1 Final, where they fell that time to Regina 5-0.

“As a freshman I just had little experience, and to see how much it really takes to get here, you just begin to appreciate it that much more,” Gehrls said. “Every year we’d come with the intent to try to get back to this big stage. But at the same time, you know that every pitch matters. These last couple of years, we didn’t win those pitches. And so to come out and win these pitches and be able to get to this point is incredible.”

Caledonia (28-6) won the few that counted most Thursday, particularly during the third inning when sophomore shortstop Emmalee Hamp tripled and Gehrls drove her home with a ground out to second base.

Senior third baseman Melina Livingston singled to lead off the game for Regina and had two of her team’s three hits, but the Saddlelites (25-8) never advanced a runner past second base.

Regina junior Marisa Muglia similarly was stellar in the pitching circle, allowing only seven hits and walking one while striking out three. Junior Jadon Huyser had two of Caledonia’s hits during a fast-moving game dominated by the aces.

Gehrls, who will continue next season at Grand Valley State, moved to 21-2 pitching this spring. She also entered this week hitting .495 with 13 home runs.

“She didn’t hit the ball (today) like she can normally, but I told her think right field, and she got (the RBI) down that right side to get that run in and that was the difference in the game,” Caledonia coach Tom Kaechele said. “That’s what she does though. She does those little things to help our team win, and that’s all she really wants. She says, ‘You know what Coach, stats, awards, that type of thing, I don’t care about those. I want to win. I want to win for this team, I want to win for you and I want to win for our community.’

“And when you have that kind of player, it’s hard not to love her.”

Hartland had swept Howell earlier this spring on the way to winning the Kensington Lakes Activities Association Gold title, while the Highlanders came in second. 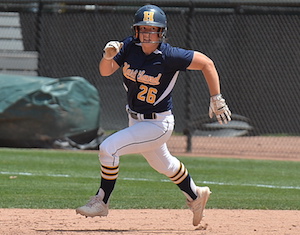 They met again in Thursday’s second Division 1 Semifinal, and the Eagles held off a late charge to finish the season sweep and earn their first MHSAA championship game appearance since 1996. Howell was playing for its first appearance in a Final.

“What it means is it’s really hard to get to this point,” Hartland coach Bob Greene said. “This is a tough tournament to win, and we’ve been blessed so far and things are falling our way. We’ve got a great group of kids really riding the wave right now. Everything’s falling into place at the right time.”

Howell opened with two runs in the top of the first inning. Hartland took the lead with four in the fourth and added two more in the bottom of the sixth inning.

The Highlanders (29-11) gave Hartland one final scare, scoring a run in the top of the seventh and putting two more runners on before Hartland freshman pitcher Rachel Everett got a flyout to end the game.

Sophomore Maddie Heilner was 2 for 4 and scored twice for Howell, and junior AJ Militello was 2 for 4 with a double and RBI. Freshman first baseman Avery Wolverton was 2 for 3 and drove in three runs for the Highlanders.

VIDEO: Brooke Cowan had three hits and two RBI for Hartland including this sixth-inning double.