She soon will be adding another one to the collection.

“Yes, we are going to be designing our fourth one,” Tritt said after the Marauders captured their fourth consecutive Division 2 crown at The DeltaPlex.

Gibraltar Carlson tallied a three-round score of 780.10, while Dearborn Divine Child placed runner-up for the fourth year in a row with a 772.24 total. Allen Park finished third at 769.06.

The Marauders continued their string of dominance in Division 2. They have won the Finals six of the last eight years and were runners-up in 2010.

“It never gets old,” Gibraltar Carlson coach Danielle Jokela said. “I think that these kids did something that was close to impossible – they won four state titles in a row.”

“This is the first season that I’ve ever coached an undefeated team where they have won every single competition,” Jokela said. “They fought hard, they did everything I asked them to do, and today they became state champions.”

Tritt joined teammates Alexis Kopchia and Maelyn Russo as the only seniors to compete on the mat all four years at the Finals.

“This feeling is indescribable,” Tritt said. “It’s like nothing I could ever imagine, and I could not ask for anything more. We were able to overcome so much this year and we pushed through it all and still were able to end on top every time.”

“No, it feels better every time,” Manthei said. “This year’s team is the best that we’ve had. There was no drama and we’re all really close. We just knew today that if we performed how we practiced, that it was ours.”

Gibraltar Carlson charged to an early advantage with a pair of dominating rounds. 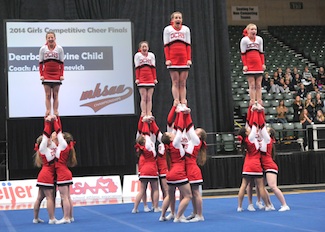 “Round 1 has been our saving grace this year and is amazing, and we have very talented girls in Round 2 who have beautiful skills,” Jokela said. “Getting those high scores definitely boosted our confidence and kept us ahead. That’s what won the state title for us.”

The Marauders held a nearly eight-point cushion entering the final round.

“It’s always good to be a little ahead after Rounds 1 and 2,” Tritt said. “It makes it so much easier going into Round 3.”

Gibraltar Carlson registered a 315.1 in Round 3, which was the third highest among the eight teams.

“We nailed the first two and Round 3 was good enough to seal the deal,” Jokela said.

Dearborn Divine Child, which won the Detroit Catholic League title, trailed Gibraltar Carlson by four points after Round 1 despite scoring a solid 230.2 to open the Final.

“It was their goal today to hit three perfect rounds, and really, at the end of the day, we don’t have any control over anyone else or what the judges give us or anybody else,” Falcons coach Amber Genevich said. “They haven’t hit three perfect rounds all season and they did that today. We would’ve loved to finish first, but we’re proud because not many teams here can say that they hit solid rounds, and we did.”

While the frustration of placing runner-up again still lingered, Genevich said this year’s team peaked at the end of the year.

“You get a little tired of being second best, but this year’s second place feels a little different than maybe last year,” she said. “We weren’t a second place team all season. We were third place or fourth place, so we had to work from the bottom and really climb our way to the top.”