GRAND RAPIDS – Last season, the Gibraltar Carlson competitive cheer team felt the pain of watching an unprecedented streak come to an end, by the smallest of margins, at the MHSAA Division 2 Final.

The Marauders redeemed themselves a year later, and reclaimed the title that eluded them.

Carlson led wire-to-wire Saturday morning en route to winning the Division 2 championship at the DeltaPlex with a three-round total of 791.98.

“Obviously, losing by .06 is like a knife to the stomach, but I think they definitely took it in stride and took it in,” Marauders coach Ayrn Ziesmer said, referring to the margin that placed her team second instead of first in 2017. “Even this season was a struggle, but we really tried to make sure it was all about the climb, and the final day, because nothing before that really matters.”

It was the Marauders’ 10th MHSAA title. They’ve won it nine times in the last 11 years and finished runner-up the two years they didn’t win.

“Winning is a feeling you can’t get anywhere else in life, and coming from a program like Carlson it is really difficult to lose,” Ziesmer said. “So bringing the title back after that loss was super important and the best feeling ever.”

“It really just broke our hearts, but it fueled our fire,” she said. “Coming back into this season we knew we could do it, and we did it.”

Carlson produced high scores in each round. It opened with a 237.80 in Round 1 and followed with a 232.08 in Round 2 to build a three-point advantage entering the final round.

Ziesmer said she didn’t know where her team stood throughout the competition.

“I didn’t look at scores today so I had no idea where we had fallen in any of the rounds, and it made it that much more fun,” she said. “I think the girls liked not knowing where they were, and I had nothing to say to them other than go out and do your best. 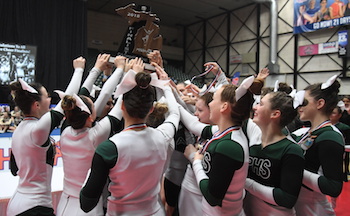 “I couldn’t have asked for anything more today. I thought they went out there and delivered in every single round.”

The Marauders won the Downriver League earlier this season ahead of Allen Park, but finished runner-up to the Jaguars at their Regional.

“I feel like this season was a rollercoaster, but we did it and I’m so proud of everyone on my team,” senior Hannah Pryba said. “I feel like we deserved it this year.”

Carlson capped the day with a strong Round 3 routine, securing the win with a 322.10 score.

“I think what this year’s Round 3 had that maybe last year’s didn’t was that emotional component,” Ziesmer said. “I felt like they wanted it so bad because they didn’t get it last year, that it was so emotional. Their heart was really on their sleeve.”

Added senior Samantha Zdankiewicz: “After Round 3 you just get that feeling and just know in your heart you put everything into it. It’s so special for the seniors to leave with a state championship and come back from all we’ve been through with the ups and downs.”

Allen Park coach Julie Goodwin figured it would be another close encounter with the area rival.

“It was a battle, and it’s been a battle all year,” Goodwin said. “We’ve gone back and forth and they are a highly-respected team. If you want to be the best you have to beat the best, so today was a battle and it was their day.”

The Jaguars put pressure on Carlson with a Round 3 score of 320.40.

“I’m proud of my girls, and they left everything on the mat,” Goodwin said. “We had an awesome round 3 today and it was a privilege to be here at the state finals and be runner-up. I couldn’t ask for anything more.”