“I can’t believe it. I can’t believe that it’s true,” said senior Melissa Green, who with Erica Lucas were part of all three runner-up teams as well. “I really felt like we had a chance every year I’ve been on the team. … We just wanted to get better. We knew if we got better, we would score better, just do better.”

Cunningham has coached girls gymnastics longer than Canton has had a team – and longer than the MHSAA has sponsored the sport.

Cunningham knew by comparing scores during the regular season that his team would have another shot Friday. After having to count three falls on beam, the Chiefs came back with a 37.900 on floor and a 37.300 on vault to take a five-point lead heading into their and Grand Ledge’s final rotations.

The Comets finished on vault and put together a 37.300, coming together after every successful landing to celebrate as they cut the deficit in half. Sophomore Rachel Hogan landed a vault she’s been inconsistent with for a 9.8, and sophomore Lexi Payne scored a 9.025 on a vault coach Duane Haring said she’s been landing “two percent” of the time.

But Canton held on with a 35.250 on bars to finish up and keep the edge in the final standings. 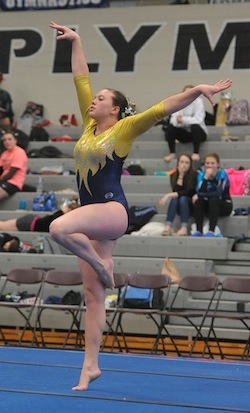 “The real quality of my team is depth. The hardest thing I had to do this week was take two girls out,” Cunningham said. "We sat girls who were getting 9s. … I had three all-arounders, and then I set the lineup with what was strongest.”

Junior Jocelyn Moraw scored an all-around 37.325 for Canton, followed by sophomore Maddie Toal at 36.725 and Green with a 36.225. Lucas and three more sophomores filled out the lineup, with Lucas contributing a 9.325 on vault. “We’ve been working hard the entire season, getting skills we never thought we’d be able to get before," Green said.

Grand Ledge has a pair of contenders for Saturday’s Division 1 individual championship, and both shined in the Team Final. Hogan scored an all-around 38.600, while senior Presley Allison – last season’s Division 2 individual champ – added a 37.650.

Farmington, the 2010 runner-up, just missed returning to the top two by finishing five hundredths of a point behind the Comets to take third. Sophomore Carina Wright scored an all-around 36.275 and senior Meredith Jonik added a 36.125.

The second-place finish ends another incredible run for Grand Ledge. Before Friday, the Comets had won 106 straight competitions – dual meets and invitationals combined – dating to the 2007 MHSAA Team Final, where they finished runner-up to Holt.

“You add up all the teams, and that’s hundreds. We’re not ashamed of anything,” Haring said. “Nothing lasts forever. Second place after we were in fifth place after three events? There’s nothing to be ashamed of at all on this team.

“They knew what they needed to try to tighten the gap for second place. They never gave up. … They were going to fight to the end.”